It all it started with undesirable piano lessons for 18-year-old singer/songwriter Blake Jones. This communications major refuses to have a Plan B because he knows he can make Plan A work. 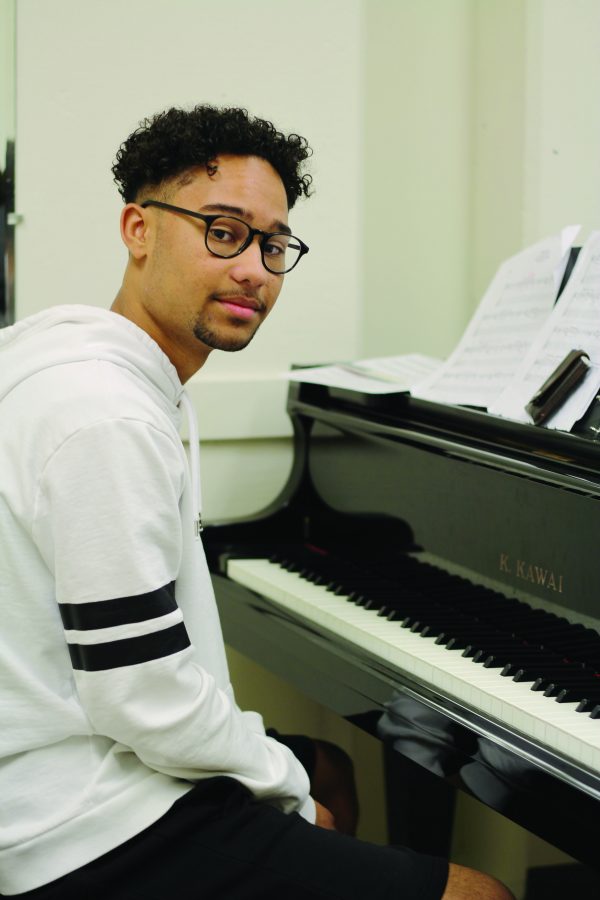 Q: How did you get started in music?

A: “My parents wanted us to play an instrument. My mom was like you’re going to play piano and my older brother, Hunter, played guitar. So we would have lessons and we would go at the same time. And I hated it, like a lot. I’ve just have always been the kind of person that doesn’t want to be forced to do things. Not in a weird way. I didn’t take an interest in piano, so having to do that and practice I was always like “why am i doing this?” So I hated it and I didn’t learn a thing because I was like I don’t want to learn it. So, I did that for a year and I would always bug my mom about stopping and I really wanted to play drums instead. Then I started picking up drums on my own and I got a drum set when I was like 14. It was a lot more freeing and there’s less rules. With drums you can play a beat and just do what you want. It was cool because I could figure it out on my own. That’s I was like yo I want to freakin play piano now. I remembered where middle C was and then I figured out piano from there. Then I was like screw this I want to learn guitar so I picked up some guitar and I had my brother to help me. I’ve been writing music and playing ever since.”

Q: Have you played any live shows?

A: “I played a show at the House of Blues. It was cool. It was all original music.”

Q: How would you classify yourself as an artist? What’s your style?

A: “That’s very hard for me. I’m very into everything and that’s a problem because when people ask me questions like that. The music that I have released has been very singer/songwriter based, it kind of had a John Mayer feel because I kind of grew up on that kind of stuff. That’s what I gravitated towards. I listened to singer/songwriters. Found Ed Sheeran and he really inspired me. Now, I have a friend who just signed with Def Jam and he’s a hip hop artist and I’ve started to appreciate hip hop. And lately I’ve been making beats. So basically everything. I’m super into film scores. Just music I guess. That’s really where I am as an artist. Trying to define myself. Because I could do this and that but if I’m going to do anything as an artist you have to have starting point.”

Q: Name all the instruments you play.

A: “Guitar, bass, drums, piano and the ukulele.”

Q: What’s your creative process like? What comes first: music or lyrics?

A: “Music. Usually music and my reason is because my emotions dictate my music. Because music is just so much of an expression of feeling. To put feeling and emotion into a tangible outlet, that’s why I gravitate towards music first. If I’m walking and I think of a super cool line I’ll write it down and save it for later but I never write a song and think how to make music fit to this. My writing process is very dictated to what the music is doing to me emotionally. I’m working on an EP and it takes forever. The song I have released now is called Paradise. It was the first song that I actually wrote using that process. I had written a tune before on the guitar and I was like yo this takes me somewhere and so I let the music guide what the song was about. This music is like telling me what to write.”

Q: What about singer/songwriters captivate you?

A: “I stumbled upon Ed Sheeran right before he was huge and what was really cool about him was his story and that’s what threw me for a loop. I was like this dude is nuts because I’m very obsessive over how people get where they are especially musically because it’s such a hard industry and it’s like how did that person do it? There are millions of people that are better than Ed Sheeran but no one knows who they are. I got to see his success. Because he was like I’m not going to have a Plan B, I’m going to make Plan A work out. That’s what inspired me about him. John Mayer is just a genius in himself. His album Paradise Valley screwed with me. It was life changing because it was different but it was really good.”

A: “It’s getting writers block and being your own worst enemy. (When writing) a lot of times I think: if I gave this to John Mayer and we both wrote a song his would just be better. So, I’m my own worst enemy because I’m like it’s not finished until I’ve written his song. I could take anything and write a song to it in 15 minutes but where the writers block for me comes in is the authenticity of it. I just sit there and I have to find the right words for every line and the right melodies for every verse. I’m a perfectionist in that way and I know that if it could be better it must be better and it’s not done until it is.”

Q: How many songs have you written?

A: I’ve written a lot of songs and a lot of uncompleted songs. I’ve probably written a dozen that are ready to go and I have pages and pages that I need to address but I never do.”

Q: What exactly is your goal?

“I would love to be a musician I know it’s very hard. I also love film my brother have I been super engaged in film together. We made movies when we we’re younger and just taught ourselves how to edit. So that sort of art. Being a musician and a songwriter would be cool.

A: “I don’t have one. I refuse to have one because I want to make my Plan A happen.“