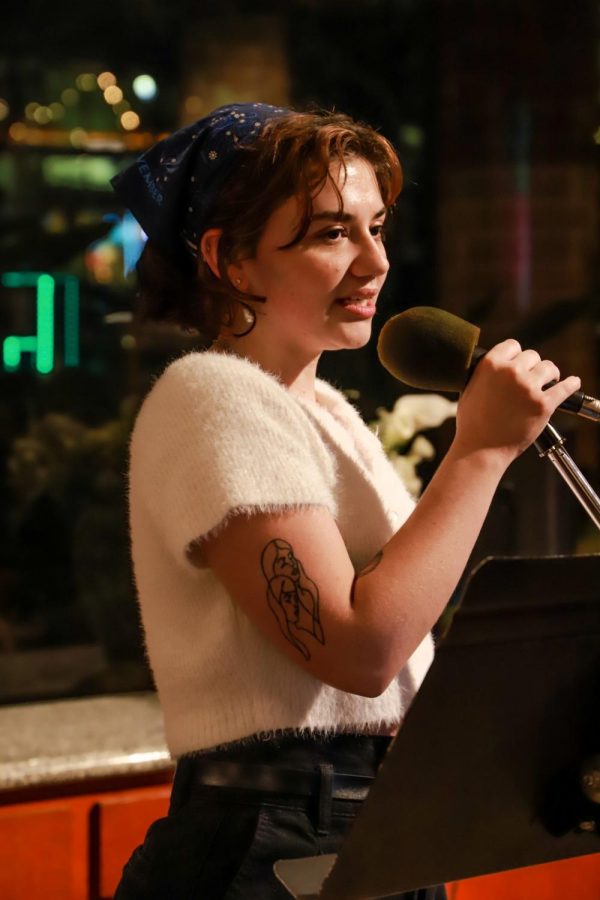 She tucks a lock of hair behind her ears while sitting at a pink vintage table in her bedroom. The walls are decorated with little collections of pictures that inspire her. Posters from the ‘70s and old postcards from Scotland creates the atmosphere. The leaves of plants provide some comfort as the sun shines on them through the window.

Bending over her small black notebook, El Camino College student Thea Rosemary, 21, a studio art major and writer, slowly writes word by word. She periodically stops and looks thoughtfully at the sketches with random women’s faces glued to the front door of her room. She is writing a poem for her class about the vain conversations she hears in Los Angeles in a metaphoric sense.

Thea wants to surround herself by the arts and bring new ideas to people. Thea’s goal is to become a novelist. Writing has helped Thea through tough times with mental health, and she hopes that her own work will help people in similar situations.

She hopes that she will show people the way literature can help them create a safe haven. Thea wants to inspire them to pursue what they love because being happy is the ultimate reward of life, she says.

She was an imaginative child, she grew up with her parents and older brother and sister.

A love for writing came to Thea when she was 15-year-old. Her older sister Bobbi Haas left a fantasy book called “Next Full Moon” by Carolyn Turgeon in her bedroom that made Thea start thinking that literature could be an interesting thing. Bobbi has always enjoyed reading and the magic of getting lost in another world through the books she reads.

“I knew if [Thea] connected [with] the right book she would love it,” Bobbi says. “I kept encouraging different reads, but she wasn’t connecting with anything. I was reading in her room and just left it [the book] on her table.”

After Thea read that book, she wanted to dive deeper in the literature world and found another fantasy book which catered to her creativity.

The fantasy book was a novel from the “Divergent” series, a story about a post-apocalyptic world where people are divided into sectors to survive. The main character is the cliche shy girl who comes out of her “shell” and goes against the government because of the strict rules that they created to control everyone. There is a love story born between characters who battle.

Thea watched the “Divergent” movie first and then read the novel. She enjoyed the book more than the movie and was surprised that the book was more in-depth. It was the moment she fell in love with literature.

She stayed up until 2 a.m. finishing the entire book in one day. The next morning she asked her mother Sandy Barbour to buy other books in the Divergent trilogy. She finished all three books in three days.

That story was a rush of emotions and euphoria for Thea and showed her the magic of words.

“That’s when I knew I wanted to take my imagination and turn it into something to help other people feel that way,” Thea says. “Even if you’re feeling sad emotions, it’s always so good to feel.”

After that Thea wrote her first book called “The Brave One,” a story about a girl who is a superhero. She sent the full manuscript to an agent who used to be an editor for world-famous publisher HarperCollins. She said the agent sent her an email that they read it but they wouldn’t publish it.

The publishing industry is difficult for young writers who want to publish their work. Jonathan Sperling, Advanced Placement Literature professor in the Torrance Unified School District’s High School and AP Literature professor at El Camino College, says that the easiest way for writers is to self-publish. Especially poetry, because it is a personal thing where most readers may not understand the writer. His students publish novels through a subsidiary of Amazon which is a practical venue for them to get their words published.

However, the agents dismiss only strengthened Thea’s self-confidence. She is proud of her first book, despite the fact it was never published. Working on this novel helped her cope with difficult times.

There are anxiety disorders that run in Thea’s family. Thea herself dealt her battle with anxiety and depression. Writing gave her an opportunity to view things from varying perspectives as a sort of therapy. Characters from her book helped her escape from reality during that time.

Thea wrote two more books after “The Brave One” and she continues to work on the fourth between semesters at ECC.

Since Thea prefers to read different types of books, she came to the conclusion that she also wants to write about different things in her life, so she combines different variations of genres in her writing.

“When I write, I almost feel like I’m in the head of my characters,” Thea says. “It’s a very special thing because it helped me transform into a person I’m more proud to be.”

Her passion for writing led Thea to join El Camino College’s Zine Club in spring 2019 and it helps her find motivation to create things and be around other creative people.

The Zine Club allows students to come together and work on different projects, such as creating magazines or mini zines, drawings and do custom designs for clothing.

Over the summer, Thea published her own zine through Mixam printing company based in Buffalo Grove, Illinois. She sold 30 copies of her zine online on the artists and designers selling platform gumroad website for $10 each. It is designed for artists who want to self-publish and takes 10 cents out of each sale.

The Zine Club helped Thea to “find a home on campus.” Everyone in the club is a talented and positive influence. That positivity showed her a way to keep working and realize that writing and artwork are what she wants to do in her life.

Thea did design work for the Zine Club and attended every meeting. During fall 2019, she became the president.

Club member Bri Mai is glad Thea is now in charge. They met as club members in the spring 2019 semester.

“She is a very goal-oriented and very hardworking [girl], she cares for the club,” Bri says. “As the club president, she is always on top of it.”

Thea wants to encourage artists in the club to work more on their individual projects as poetry, digital works, designs or personal zines.

“She’s a big inspiration to all of us,” Leslie says. “It’s very understandable why she’s the president. We’re already way ahead than we were in last year’s club.”

After Thea discovered zines, she got more into graphic design and illustration.

She used to do graphic design at her previous job at “Best Swimwear,” a little boutique in Hermosa Beach. Thea was an intern for her sister while Bobbi was on maternity leave.

Her job was to do email marketing and website content. Thea worked for three months and fell in love with this kind of job because it helped her think about being an illustrator in the future.

Thea wants to focus more on her creative writing and studio art classes after the end of the Winter session when she will be done with her general education classes for associate degree (AA). She also decided to strive toward receiving two AA’s – one in English for her writing, and the other in Studio Art by fall 2021.

She dreams about transferring to Otis College of Art and Design in San Francisco, where she wants to pursue graphic design and creative writing.

Thea’s room is also full of many antiques such as small mirrors, jugs, figurines, pillows and more.

Thea also loves collecting vintage items. The Beatles, Queen, Love and many other records and cassettes are piled on a chest of drawers near Thea’s bed. She likes its charm and history.

Collecting vintage things is special because it’s keeping something someone had so long ago, she said. It makes her feel as though those people are still alive and speaking to her, spreading their stories and wisdom and acting as inspiration.

Thea describes herself as an “old lady-like soul,” and says that she has “the heart of Peter Pan.”

She is very protective of the people who are close to her, just like Peter Pan does. At the front of her bed, she hung a poster on the door of Peter Pan, with a bunch of old letters and cards that she has.

She loves to be youthful and thinks that it is so important to stay young at heart and to have a youthful love for life. She is interested in fashion and music from the 1970s, a time when the hippie culture was at the peak of popularity and a time when peace and love were preached.

Thea thinks that the process of writing is an individual thing. She found out that listening to music creates a “symphony of ideas and sensory of objectives,” for her.

She writes every day. Between the notes on her phone and a little black book that she carries everywhere, she also has many works stored on her computer. She tries to write something every day, even if it’s just a word, Thea says.

Between her work at the club and at EC, Thea found a part-time job in September in a small coffee shop called “Hi-Fi Espresso” in Hermosa Beach.

That work helps inspire her for future stories because most of the customers share their stories with her.

Thea thinks that random things that come across her life can be useful in her writing. She tries to find interesting elements of everyday life that can become a story. For example, there is a man who Thea Rosemary often sees around her house. He just sits at the end of the street and has a puppet with a megaphone. One day she took a picture of him just in case she incorporates him into one of her stories.

In November 2019, she decided to change her name from her legal name Taylor Barbour to Thea Rosemary. She has come into her own as an artist and individual and wants to bring more of her heart and soul to her identity.

Thea feels close to her mom and sister and their Lebanese roots. She wants to bring old names of their heritage back to the present. The name Thea means the name of the goddess of light, mother of Sun, Moon and dawn. Rosemary is the name after close and distant relatives and a combination of the Marie and Rose names of her family. Thea was always told by people that she is a lover and everything that she does comes from and ends in love.

Her family was hesitant about Thea’s name change. It’s a strange thing to do and seemed like a sharp decision to her parents, she says. This new name has brought Thea closer to her identity. She says that her parents still call her Taylor which she is ok with. Her parents have accepted and supported her decision.

“It seems I’m always changing into something new,” Thea says. “But my soul will forever remain the same–I’m just now embracing pieces of me I was afraid to.” 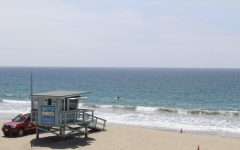 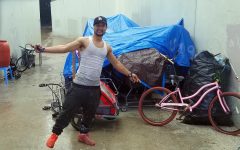 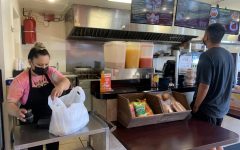 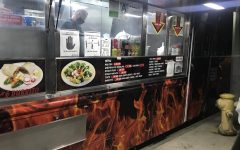 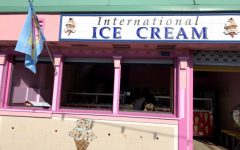