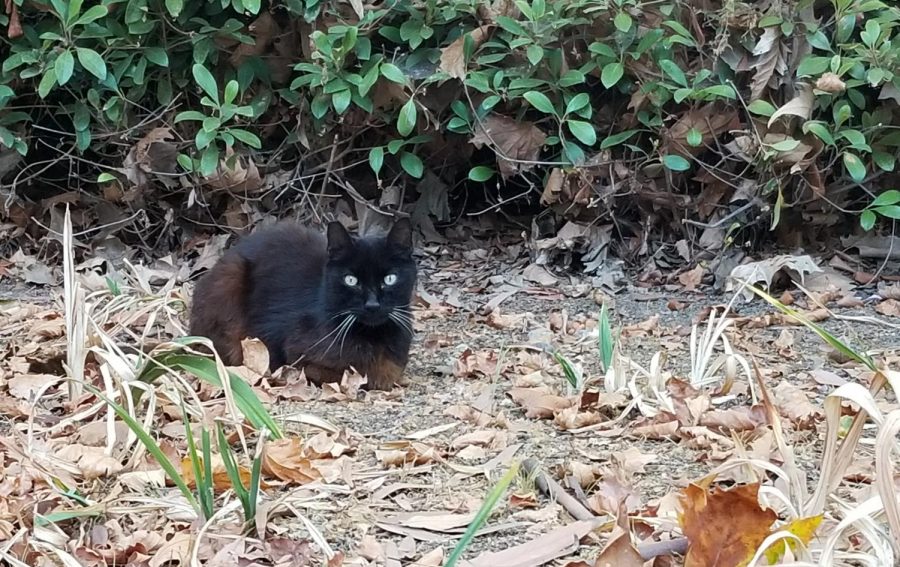 The leader of his group and always making sure his friends were taken care of, Don Cornelius rests at his usual hangout near the Humanities Building on Wednesday, Aug. 29. “He was always one of the friendliest of the cats,” Kate McLaughlin, 50, Associate professor of journalism and English said. Photo credit: Ernesto Sanchez

Warning: This article includes an image of a graphic scene.

After being abandoned on campus for his first day at El Camino College, he was frightened and scared at the thought of being alone for his remaining days.

It did not take long for him to make friends like Orange, who guided him along the way until he was ready to lead the group, right up until his final moments.

Don Cornelius, known as the “dean of cats” by loved ones, was found dead on the north side of the Humanities Building Saturday morning, Dec. 16, in an apparent coyote attack, Associate professor of English, Elise Geraghty said.

“He was an easy going guy, friendly, he was a man of strict routine,” Kate McLaughlin, Associate professor of journalism and English said. “He was an unquestionable leader, the cats really followed him and rallied wherever he was.”

Cornelius arrived at EC in 2009. It was not until 2012, that Geraghty and a student gave him the name Don Cornelius, after the creator of Soul Train, who died that same year.

“I was Associate Dean at the time and I saw him,” Geraghty said. “One of the student workers; we were trying to come up with a name for him and I had been talking about Don Cornelius so she said why not Don Cornelius.”

Don Cornelius was one of the many cats that call EC their home.

“Sometime in the late ’80s or early ’90s, the administration at the time wanted to get rid of the cats on campus and nobody knew how but the cats disappeared,” McLaughlin said. “Then rodents overflooded EC and the administration realized that cats have a real role to play with the pest control.”

When the cats at EC arrive on campus, they are in need of many necessities. Senior Clerical Assistant for the Facilities Department, Debbie Turano and her husband Carl Turano were one of the first EC community members who began to care for the cats.

The Union was unable to reach the Turanos for comment.

“A lot of us on campus saw what [the Turanos] were doing and we’re all cat lovers and we tried to formalize it a little bit and increase the number of people that would care for the cats,” McLaughlin said. “Now we have several dozen people that take care of different areas on campus and have low-profile feeding areas that get cleaned.”

They call themselves the “El Camino Cat Care Volunteers.” This group has provided food, water, and have even participated in the national program called “Trap-Neuter-Return.”

“[It’s a] successful program all over the nation–[a] way to maintain a low number of cats on campus,” McLaughlin said. ” [You] grab a cat and get it fixed and it keeps control of the cat population.”

But that is the least of their issues. Since cats are often abandoned at EC due to its park-like environment, they become at risk to predators such as coyotes.

“It’s hard on the cats, they’re not wild animals, they’re not equipped to live in the wild like that,” McLaughlin said. “[At EC] they’re exposed to a harsher environment, so we try to do what we can but what happens is what we saw happen to Don Cornelius.”

Cats like Cornelius, who are domestic, are in danger because of the coyote population in Alondra Park but even park workers don’t know where the coyotes are coming from.

Tiffany Fenderson, park supervisor said that Alondra Park has no information regarding the wildlife of the park except that they’ve had influxes of coyotes.

“[We have] coyotes coming from we don’t know where and we posted signs in our park to let [people] know they are out here,” Fenderson said. “Nine times out 10 we have to call animal control.”

The Union contacted Torrance Animal Control and was referred to the County of Los Angeles Department of Animal Care and Control, which could not be reached for comment.

These cats are not feral so they can’t defend themselves against coyotes, who possess the strength to take down animals as large as an adult deer, according to the County of Los Angeles Department of Animal Care and Control website.

EC has taken measures against coyotes with the help of Debbie Turano who was instrumental in implementing coyote deterrents around the campus last semester. The deterrents come on at night and have a flashing red light that is supposed to help keep coyotes away.

When Cornelius was abandoned back in 2009, he was already an older cat, putting him well into his teens at the time of his death.

“Don had recently fallen ill, he was getting old and raggedy,” McLaughlin said. “You could tell that he was aged.”

McLaughlin said that Cornelius was a really selfless, happy cat that sought to make sure the other cats always had been accounted for before him.

“He was such a natural leader and loved all his friends and looked out for them and shared his food,” McLaughlin said. “So we really believe that when the coyotes came on campus, he knew it was a dangerous situation and took one for the team.”

The cats at EC have proven to serve an important role on campus and in the community.

“They’re animals and they don’t really have a voice but they are still very much a part of the community,” McLaughlin said. “They’re happy to be there, they expect their breakfast and dinner, they depend on us and they all have unique personalities.”

Update: 10:05 Tuesday, Dec. 18. An image was moved lower to fit the design of the website. Also a video was added. 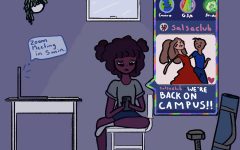 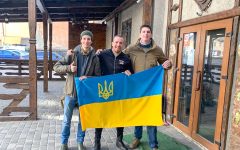 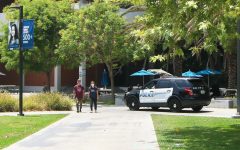 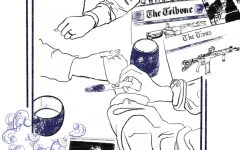