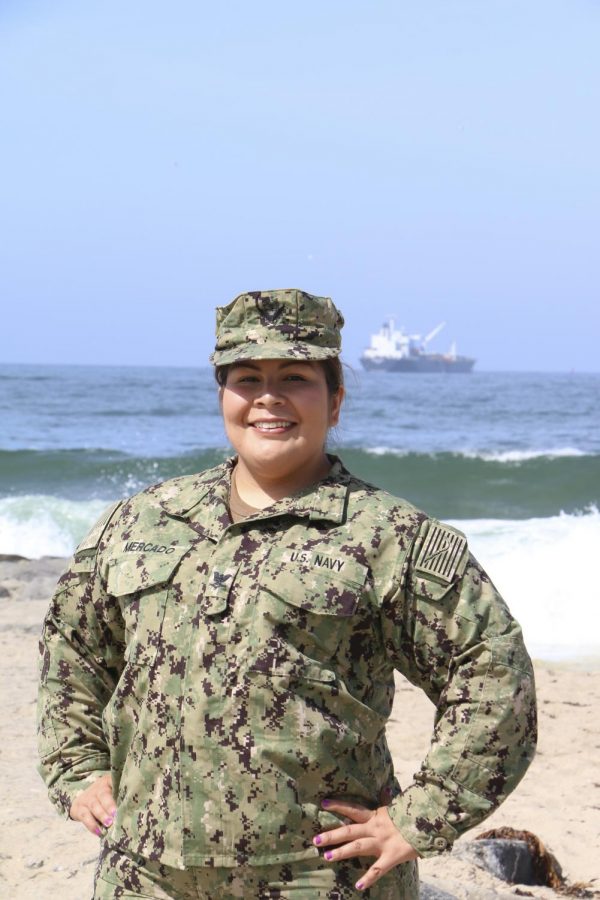 It was around 2 a.m. and the USS Ronald Reagan ship seemed dead in the early morning.

Lesley Mercado woke up in her general quarters to a dark room. It was darker than usual, but she did not think much of it until she got out of bed.

None of the red lights were on. They were not working.

Maybe there is a short circuit or something Lesley thought without being concerned. Someone would get it fixed soon.

As she headed down to the Damage Control (DC) central, the whole ship was still dark except for the faint emergency lights.

“Is there something going on?” Lesley asked herself as she walked down the halls.

People were running all around hustling as they grabbed their things. Many faces around the room looked nervous while others looked panicked.

“We are dead at sea,” the engineer told her and scurried away.

After four hours, the North Korean submarine emerged from the water and went back down under. It continued to do this repeatedly. To see the ship, you needed binoculars, but it was not as far as Lesley had thought. She could see that it had a big painted flag of North Korea on the side.

At this moment, everything that was happening hit her all at once. “Wow. I really signed my life away–this is real, and this isn’t a game,” Lesley said.

Lesley was born on July 21 in El Segundo. She loved playing games and spending time with everyone.

In high school, she wanted to become either a photojournalist or an interior designer. Her grades were not the greatest and she thought that she did not have a chance.

Joining the military was always a backup plan if her first choices did not pan out.

After she graduated high school, she attended El Camino College for three weeks before dropping out. Over the next few years, she put all her time into working. In 2016, she decided to join the Navy. There, she became a damage control man, a Navy firefighter and then worked her way up to fire marshall.

She has visited many places in the United States as well as Japan, Spain, and many other countries. Her first deployment was to Yokosuka, Japan where she was stationed in Japan from June 15, 2016 to April 2017. Lesley made many friends while she was there and always tried to go back and visit.

While in Japan, she learned more about herself. She learned not to depend on others to always be with her and learned to explore on her own. She volunteered at Japanese schools and learned that children there sat on the floor. She loved the mannerism that they portrayed. She especially loved all the food.

But Lesley was new to the U.S.S. Ronald Reagan ship in 2016. She was less than a year into her deployment when her first scare occurred.

DC Central is where the engineers go to scan their watch and talk to their watch officer. The ship was mostly unlit except for the faint lighting of the emergency lights.

All the engineering officers were in the room; the commanding officer of the ship, the captain, the executive officer, the second in command and others in the chain of command. Everyone was moving around the room at a fast pace securing their equipment. They were gearing up for what lied ahead of them.

The ship and all its personnel were dead at sea. Nothing on the ship was working. They were stuck in the middle of the ocean unprotected.

No missiles. No light. No ship engines.

“Oh OK, we’re going to fix it,” Lesley told an engineer shrugging it off.

“No, it’s more serious than that,” The engineer told her looking worried.

Lesley still did not understand the big deal of what was happening. Her friend then explained that North Korean ships were seven nautical miles (~8.05 miles) away and had been following them for some time and if the North Koreans found out that their ship was down, they could come after them and they could not do anything about it.

“We were sitting ducks,” Lesley says.

They were helpless, just waiting for anything bad that could possibly happen to them.

Lesley’s superiors sent her up to Communications to further assist them. She had her radio and headset, ready to patrol the ship and aid anyone in need. Soon everyone from General Quarters was awake and gearing up. Many went to the Repair Lockers, which is where they have special equipment like firefighting gear and grabbed some equipment in case the ship was to be hit.

For four hours, people were patrolling the ship or were in the engineering room trying to figure out how to fix the problem while others waited to see if anything would happen.

With night vision goggles, Lesley’s Navy friend showed her the North Korean submarines, and after four hours of no service and power, the ship came back to life. Everything was calm again and everyone went back to work like normal.

That’s when she realized what she had signed up for was no joke.

In the mess decks, what they call the cafeteria, Lesley and her friends joked around the table while eating their lunch chow when they were suddenly called over a 1MC speaker that was wired all over the ship.

The bell began to ring. Then a loud voice shouted over the speaker.

“FIRE, FIRE, FIRE! Fire in the department!” someone shouted over the 1MC speaker.

Lesley and her friends rushed to the Repair Lockers to get suited up. She put on her firefighting gear, SCVA bottle, mask, helmet, boots and other equipment that she thought she might need.

She and her crew were excited because they were finally able to fight a fire and put their training to the test with this incident.

Lesley was the team investigator. She was paired with ITSN Connor, her friend, and they had to figure out where the fire was, its boundaries, if anyone was in trouble, or if anyone needed help. She had her radio with her and was constantly going up and down the ladder wells in search of the fire. When she found the fire, she put her hand on the door to feel the heat and see if the fire was coming from another compartment. She then radioed someone at the Repair Locker and went back to get dressed in additional gear.

It took almost two hours to put out the fire. One by one, each person took turns holding the nozzle of the hose and changed positions when someone got tired. The room was filled with flames.

They later found out there were two reasons for the fire. First, someone’s iPhone charging port was not electrically safety tagged and it was brought onto the ship. Secondly, a coffee pot was left on and it caught a spark which combined with the charging port to create a fire.

Everything in the room was charred. Everything was gone. Because of this event, the USS Reagan had to be docked in Spain.

Outside the military Lesley has left an imprint on many people including her two good friends Victoria Chance and Jazmin Gonzalez and her brother Dylan Mercado. Lesley has known Victoria for over two decades. They have been best friends since preschool at Center Street Elementary School in El Segundo.

“Lesley is a very outgoing person and always puts other people’s needs before her own,” Victoria says. “She is a great mother to her daughter Logan.”

Throughout the years, Lesley has built many close relationships.

“She has always been the person I go to when I need to talk,” Victoria says.

Jazmin and Lesley met through Craigslist in 2015. Jazmin was renting out a room and Lesley had just moved to San Diego. They were both Navy veterans and rooming together worked out well for them.

“She definitely wears her heart on her sleeve, but very compassionate, adventurous and a big explorer,” Jazmin says.

She enjoyed and misses all their long late-night girl talks about their day or about how they were feeling when they lived together.

Lesley and Dylan grew up together watching each other become respectable young adults. Dylan is currently a sophomore at El Segundo High School. He has fond memories of his sister when he was younger; taking him to the park to play on the swings and attending his school concerts to show her support.

“One of my favorite memories would be when she would ask me to be her sou chef [and] bake with her,” Dylan says. “We would bake cakes and bread.”

Lesley returned from her last deployment in April 2020 amid the COVID-19 pandemic. She is now back home living with her parents, brother, and daughter in El Segundo, California.

She’s continuing her educational career at El Camino College studying Administrative of Justice to become a criminal lawyer and help those in the community.

Today, she attends school full-time and has two part-time jobs at the Container Store and at the Los Angeles Airforce Base as an administrative assistant.

Since most classes are now online due to the pandemic, many worried they would not get money for housing, however the United States Department of Veretran Affairs is allowing it this semester.

“Veterans are not traditional students and so a lot of them don’t feel like they connect with the other students because they have had a unique experience,” Brenda Threatt, assistant director of the Veterans Program, says.

Because the El Camino College campus is closed, the Veteran Services Program is open virtually. They are open Tuesday through Thursday. Virtual counselor’s appointments to plan classes, get tutoring or other services are also available online.

This program allows students from different military backgrounds to come together and gain support from others who have been in their situation. They also come together to have BBQs, soccer games, participate in community service and many other events.