With instant speed, a surfer glides up on a wave, circles back down, gets low on the board and lifts up out of the wave. Completing his aerial, he lands back into the wave. The wave closes out, settles and he paddles back out into the line-up to catch another wave.

“Did you see that!” a surfer yells from the shore.

It’s 8 a.m. on a typical Friday at El Porto in Manhattan Beach but for 21-year-old Hunter Jones this is his every day.

Hunter plans to call surfing a career one day and with the support of five surf sponsors, his family and the South Bay community he isn’t far off. Hunter is a film major at El Camino and will transfer to Cal State Dominguez Hills in the fall.

He was 10 when he caught his first wave. One day while Hunter was at El Porto in Manhattan Beach with his best friend, Easton Jones and his family, Easton’s dad taught Hunter how to surf. He went into the water, got on the board and Easton’s dad pushed Hunter onto the wave. 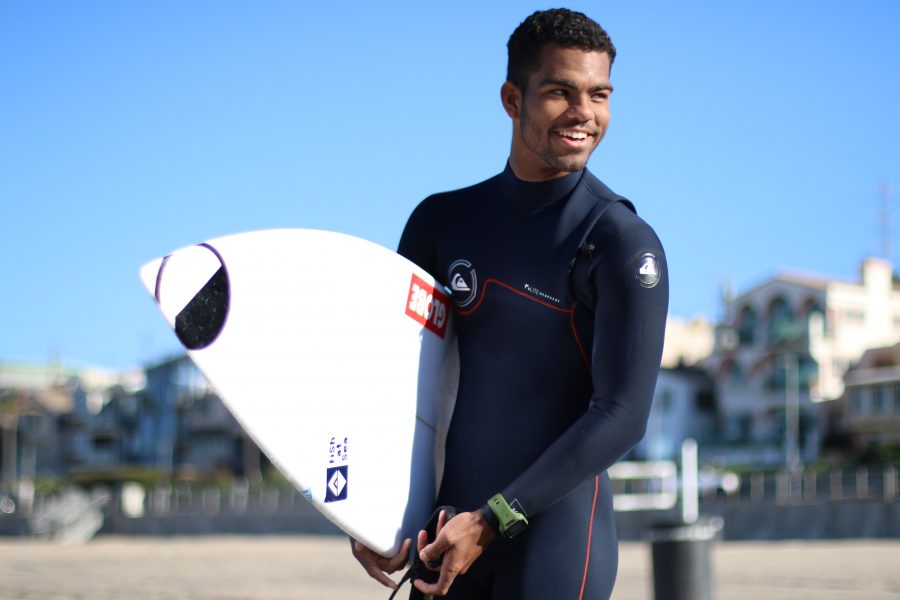 He knew then that he didn’t want to do anything else.

Surfing is far from easy, in fact it’s one of the most difficult sports because the ocean is unpredictable.

“The crowds, the cold water, the closeouts–there’s no end to the challenges,” Senior Editor for World Surf League, Anna Dimond says. “Surf spots in the South Bay are all beach breaks. Beach breaks waves are fast and sometimes steep, meaning surfers have to be able to pop up quickly, take a steep drop and then get out of the wave before the lip closes on them.” 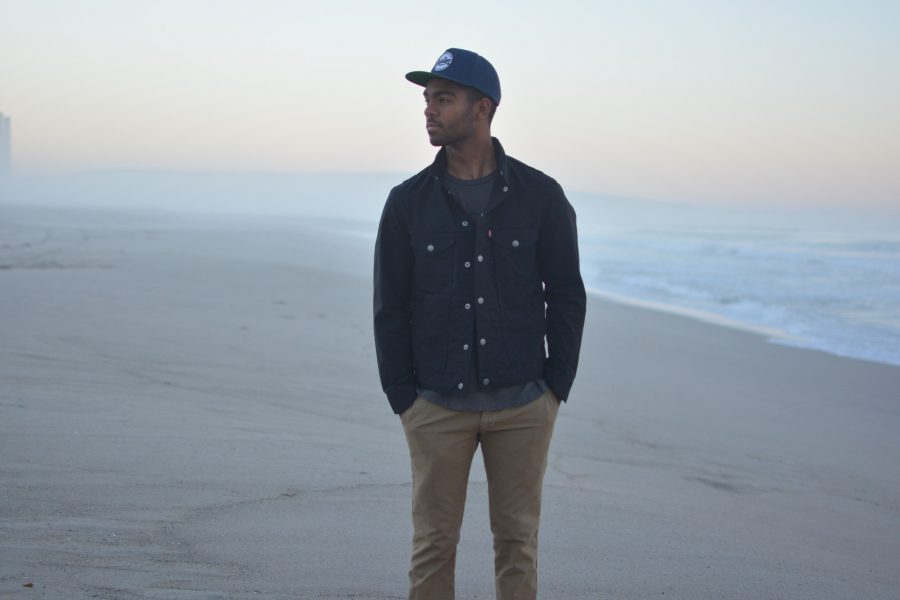 It’s the challenge that has this surfer addicted. Never knowing what to expect when he paddles out and the “what-if that perfect wave comes” is what keeps him in the water for hours on end.

His talent is undeniable.

Hunter didn’t grow up in a surf cultured family, in fact not in a million years did they think he would be a surfer.

When he was younger he would beg his parents to take the beach route home after church, it was then his parents knew he had a love for the water. His dad, Prince Jones, describes him as a strong, fluid and creative surfer. Whereas his mom, Allison Jones, tries not to stress over the constant injuries.

To make it as a professional surfer, one has to have natural talent, a supportive environment or culture, an incredible work ethic, discipline, resilience, and pure passion, Anna says.

Despite the closeouts, the constant injuries and the rough conditions of the South Bay, Hunter’s main focus is to improve every time he paddles out. It’s taken countless hours and surf sessions to get him where he is today but he notes that it’s his faith in God that has taken him this far. 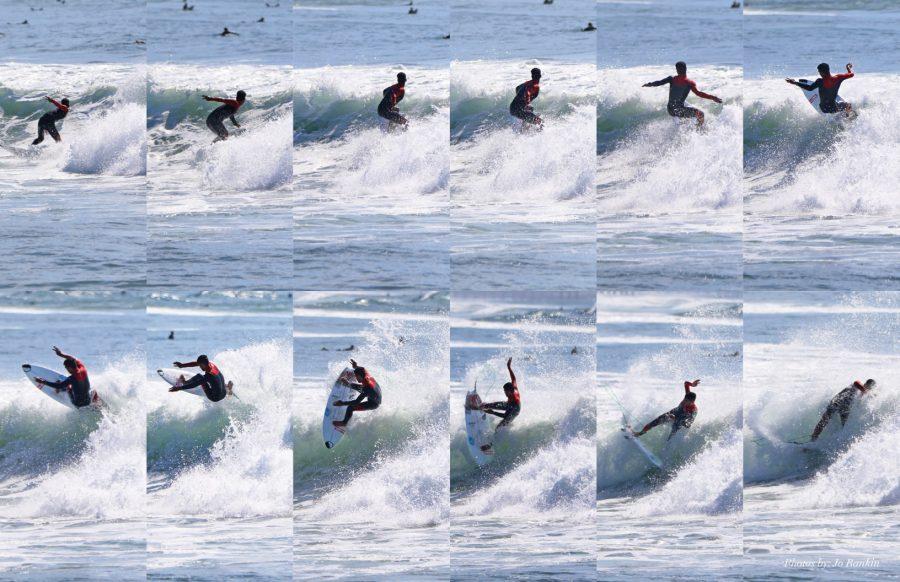 Some of his sponsors include: Fish At Sea, Wellen, Globe, SOVRN Republic and E-Tech Surfboards. In a recent collaboration with E-tech surfboards Hunter has had the opportunity to create his own surfboard model called the ‘Hunter Jones Model.’

Back at El Porto, it’s now 1p.m. and Hunter has finally surfaced from the waves. It’s the first break he’s taken all day.

He gets lost in the moment.

Most of Hunter’s favorite moments surfing have been spent with friends. From being chased by seals with best friend Ryan Goeglein to Easton’s attempt at teaching him to surf ending with a young Hunter crying because the board hit him in the face.

Yet, he doesn’t seem to let it be. When he catches a wave he’s solo but for this surfer it’s always better to have his friends by his side. 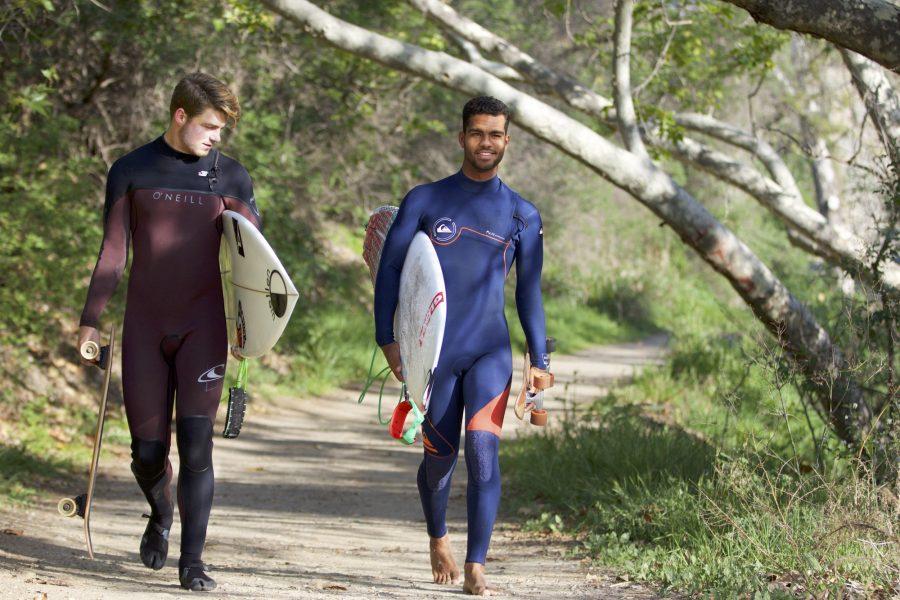 He knows what he wants and how to get there but even he will admit that he doesn’t know whom he is. But maybe at 21 that’s OK.

“Woah! Did you see that?” Hunter exclaims as he points to the wave of the day.

When it comes to the waves, it’s hard to get him to focus. He may not know who he is outside the water but it’s clear that everything makes sense when he surfs. 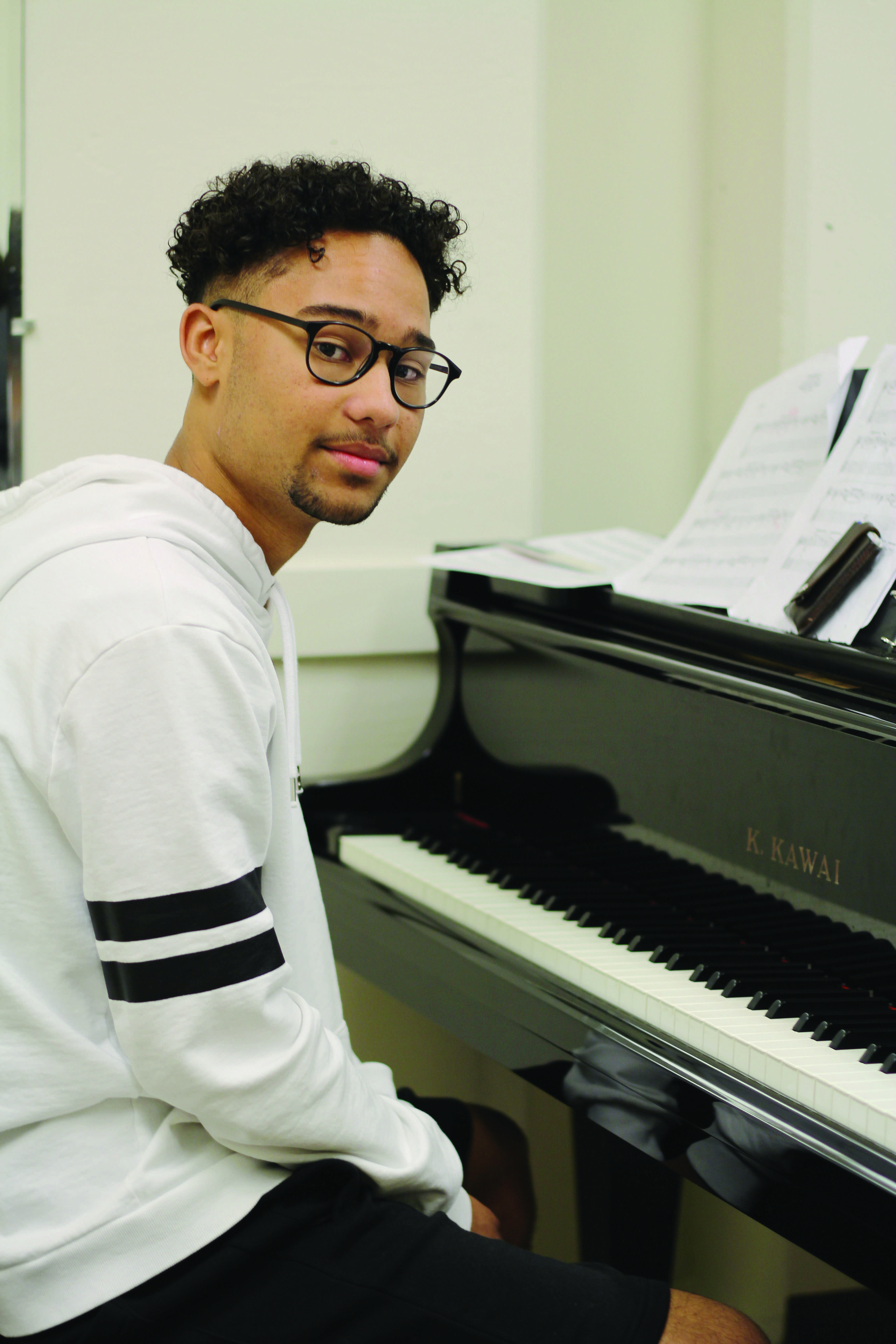