A love of books, history and genealogy inspires a career in the library 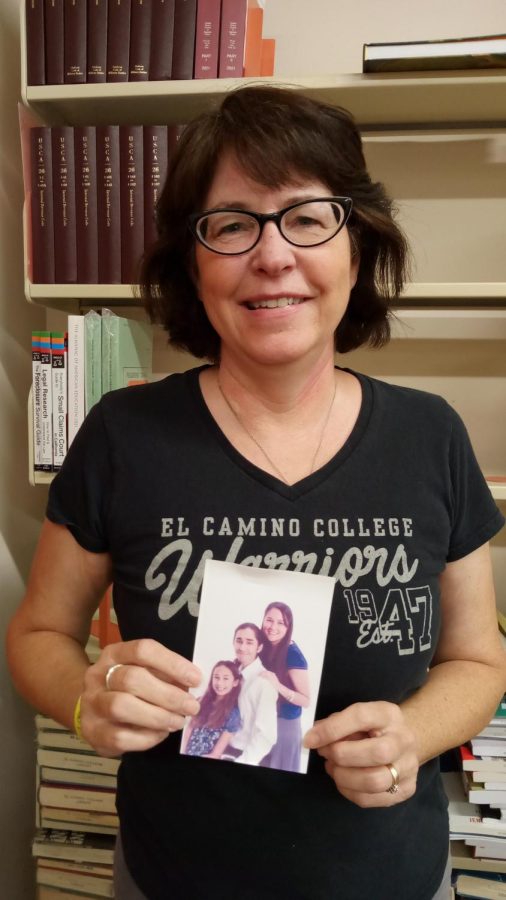 In 1984, she was a 21-year-old student in her third year at El Camino College and working part time as an assistant in the ECC library.

She married in 1985 and had her first child that same year. She had planned on getting her associate degree, but her focus at that point was her family and making a living.

Laurie Pelayo, 58, is a library and learning resources specialist, now in her 40th year of employment at ECC. She has dedicated her career to the ECC library, meticulously cataloging and processing new material, which includes entering computer records, barcoding and labeling books.

“Everything kind of happened in 2005,” Laurie says. “The cool thing is (my) kids were pretty understanding and I think I set a good example for them.”

Laurie has been married for 37 years to husband Alden Pelayo. She has three grown children and all attended ECC. Her eldest daughter, Lessa Pelayo-Lozada, 36, followed in Laurie’s footsteps, and what’s even more unique, is that Laurie got to graduate together with Lessa.

“We both graduated in 2005. So we marched together, except she was (on) the honor roll and I was not,” Laurie says.

Lessa went on to graduate from the University of California, Los Angeles. She is an adult services assistant manager for the Palos Verdes Library District and was recently elected president of the American Library Association. Her term starts in June.

Son Alec Pelayo, 31, has a culinary degree from The Art Institute of California, Santa Monica, but changed careers and was in the paralegal program at ECC in fall 2021.

Her youngest daughter Alyse Pelayo, 22, studied anthropology at ECC, then transferred to UCLA in spring 2020. She graduated in June 2021 and is working part time at ECC as an assistant library and learning resources specialist in the ECC Music Commons.

Laurie’s children aren’t her only family members to attend ECC. It started with her father Robert Pooler, who was in the United States Army Air Forces during World War II. When he got out of the service, he took community college classes in New York, then relocated to California.

“He wanted to continue (his education) here and El Camino was brand new, so he started taking classes in probably 1949 or ‘50,” Laurie says.

Robert appeared in two of ECC’s early theater productions on campus. He starred in the lead role in the Shakespearean play “King John” after being recruited for his strong skills in speech class. He also appeared in “Finian’s Rainbow” in a supporting role as a leprechaun, but ultimately graduated from ECC with a degree in chemistry in 1952.

Her mother Ruth Pooler saw the opportunity to take classes at ECC and would accompany Robert.

“She would ride with my dad. While he was in class, she’d take sewing classes,” Laurie says.

Laurie’s brother Michael Pooler, who is 17 years her senior, was in the United States Air Force during the Vietnam War. Michael studied Russian at ECC and did intelligence work for the Air Force.

“When he got into the service, they found out he had taken Russian and they were like, ‘Hey, what would you like to do? We have a plan for you,’” Laurie says.

When he got out of the service, like his dad, he studied chemistry at ECC, then transferred to California State University, Dominguez Hills, where he graduated in 1972.

Laurie has been researching her family tree since she was a student at Torrance High School and has traced it back to the 1600s. She even travels once or twice a year to the Family History Library in Salt Lake City, and through her research she discovered she had ancestors that were on trial for witchcraft.

“There was an article on some students back in Salem, Massachusetts that were trying to clear this particular woman that was accused of witchcraft,” Laurie says.

Laurie is a direct descendant of the woman’s sister and mother, who were also accused, but cleared. The woman was one of the few that weren’t cleared.

“When you think about the fact that genealogy can take you to something so historical that you wouldn’t expect, genealogy is fascinating,” Laurie says.

But not all family members agreed. Some were willing to talk about family history, while others were not.

“My grandpa would tell you anything. It didn’t bother him in the least, but my grandmother was like a closed book,” Laurie says.

Genealogy was also a topic that came up with her in-laws.

“My in-laws are (Native) Hawaiian and my father-in-law was a genealogist, so he and I kind of bonded,” Laurie says.

Laurie’s love of history and passion for genealogy led her to volunteer some time to the South Bay Cities Genealogical Society, where she was a librarian, secretary and former president.

And, if her dedication to the library wasn’t enough, Laurie has authored “The Lydia Proctor Mystery” series, a series of five genealogical mystery books.

“Laurie has a very specialized job. She, as a cataloger, probably has the highest technical skill set of probably anybody in the whole building, and without Laurie we couldn’t have, as successfully, migrated from one library system to another, which we did just before COVID,” Crystle Martin, dean of library and learning resources, says.

Lorna Rice, associate director of the Torrance Family History Center says she is a big fan of Laurie’s.

Throughout her time at ECC, the Genealogical Society and writing her books, libraries have been a constant. Friends would grow weary of learning where she was going on vacation.