Museum guide is just getting started

Rediscovering her roots through the power of art and community 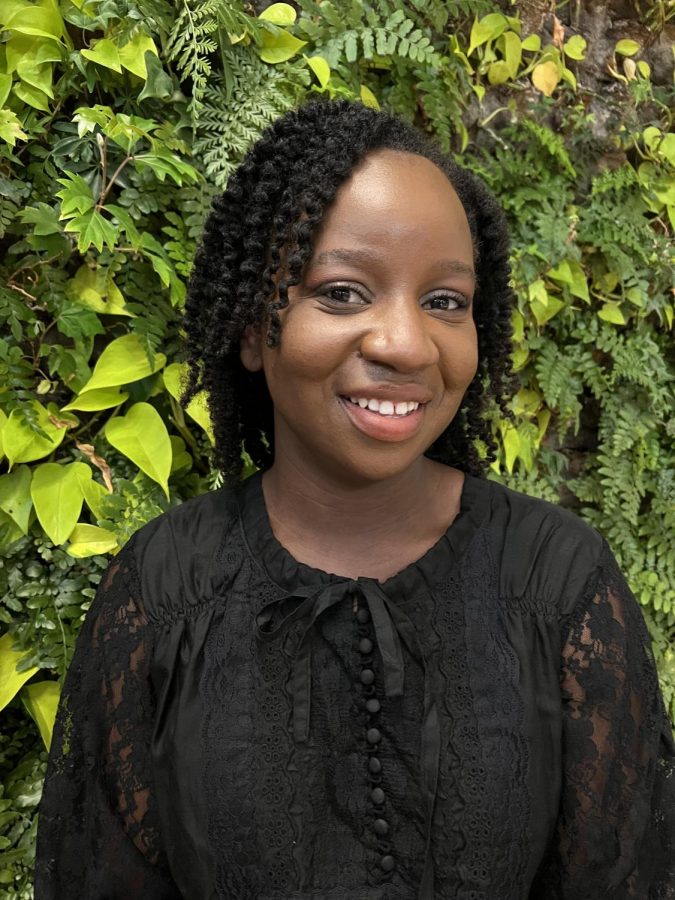 Rachel Hardie poses in front of a plant-filled wall at the Del Amo Mall on April 28, 2022, in Torrance, Calif. (Brittany Parris | Warrior Life)

You hear her before you see her.

It’s a Wednesday afternoon and Exposition Park in Downtown Los Angeles is bustling with young and old alike. Among the chattering crowd is the low hum of a bass that is getting louder and louder as it nears the parking lot. Pulling up in a white Buick, the chorus of The Backstreet Boys’ “Everybody” is blaring from the speakers.

She gives a wave and laughs through the windshield before putting a mask on. As she approaches, she’s in uniform – a black shirt with the California African American Museum logo on her petite frame. Not only is it work attire, but it serves as an emblem of self-discovery of her own identity and cultural roots.

For Rachel Hardie, 27, a career as a museum guide at the CAAM was not something she ever thought she’d be doing. A job that was only supposed to be temporary took her on a journey of finding her own Black identity.

Much of her transformative years can be remembered down a quick drive down 123rd and 135th Street, where she attended Juan de Anza Elementary School, Dana Middle School and later Da Vinci Science High School. Around this time, she began to feel out of place among her peers. She started questioning her own identity and self-image in a predominantly white school district in her hometown of Hawthorne.

“Yeah, I think I would be a lot more different if I did not work at the museum,” Rachel says. “I had never felt that I was a part of the culture, I guess. But now, working there, I changed a lot more.”

In 2012, Rachel enrolled at El Camino College, and she decided to pursue a history major without really knowing what she wanted to do with the degree. At the same time, the Los Angeles native had started as a docent in a high school program involving museum training and was working her way up the ranks.

“I was watching a religious documentary and it was comparing different moments in history with the Bible and how they coincide, and I thought that was cool. So, I figured I’d go with history because it was interesting, and I thought I could go into teaching since it’s necessary,” Rachel says.

However, a course in African American history at El Camino College solidified a passion for the subject. In all her years of schooling, this was the first time she was learning something beyond the basics.

After graduating from El Camino in 2016, Rachel considered transferring to a University of California or California State University to stay close to family. She also wanted to pursue a major in cultural anthropology, but she was comfortable at the museum and the connections she was making. More specifically, she learned more about herself and a culture that she didn’t fully feel a part of yet.

A quick look at her family tree expands from Scandinavian to Native American, with some Irish and Scottish. However, Rachel and her parents condense their ancestry in simple terms.

“In our family, we say Black, as in descendants of slaves and thus a little mixed,” Rachel says.

She grew up hearing the term “Oreo” to describe a Black person who “acts white.” Entering her teen years, she started listening to alternative music and getting more into anime. These hobbies helped her find a supportive friend group and a community where she felt like she could be herself. It also turned into a family bonding experience.

“Even though I’m not super into anime, I’ve always watched it because that’s what my family was into. My dad has collected comic books ever since he and his brothers were in middle and high school. So, I grew up watching Batman and all of that, and I wouldn’t be allowed to watch what I wanted like Sailor Moon, Speed Racer, or Dragon Ball Z, unless it was with them,” Rachel says.

These early experiences have helped her develop a passion for continuing to work at a museum whose goal is to collect, interpret, and preserve the art and history of all Black artists and influential figures. She wants people to know that there is so much more than meets the eye when you step out of your comfort zone.

“So many people think that Black people must be into hip-hop, must know how to dance, all of that. But when you get to the museum, you see Black artists that focus on sci-fi and Afro-futurism. You meet other Black artists who are also into anime and didn’t think it would take off, but you see guests interact with it and love it,” Rachel says.

After almost a decade at the museum, she no longer feels the need to prove her blackness but now educates others on the subject.

“Working at the museum is meaningful because it’s nice to share my culture and not only that but help educate people. Some people come in and have some misinformed thinking, and it helps to dispel certain stereotypes,” Rachel says.

Marie Jennings, the gallery supervisor, speaks highly of Rachel’s accomplishments and how they contribute to the museum.

“She’s very creative, yet reliable with unique strengths,” Marie says. “She is pretty creative at coming up with education activities and interpreting our exhibitions to visitors. She is also very reliable and good with some of the more administrative duties of a museum guide.”

Rachel hopes that people begin to understand that blackness is not a monolith by visiting the museum and embracing these differences.

“Everyone’s different, which is a big thing,” Rachel says. “People are often surprised at the events we have, like yoga, and it shouldn’t be that surprising, and that’s why the museum is here to dispel those myths.”

Although the educational aspect is important, the community work that the museum partakes in is a big reason why Rachel loves what she does.

She reminisces working with Tina Lawson, mother to singers Beyoncé and Solange Knowles, for her Wearable Art Gala in 2017. The foundation helps underprivileged children in the Los Angeles community.

“I worked with her from the very first day she came to scope the place until the night of,” Rachel says.

However, she jokes about how the opportunity itself came about.

“So, I was involved because my boss planned to retire but didn’t tell us. And I remember, I think, she changed my lunch schedule and said she had a friend coming,” Rachel says. “OK, next thing you know, Beyonce’s mom walks in, and she called me over, Rachel, meet Miss Tina. I was like, ‘oh!”

The museum itself is a hub for celebrity sightings. Issa Rae, creator of the HBO series “Insecure,” was also part of the docent program. The museum appears in the show’s second season if you look closely.

Despite the glimpses of the occasional celebrities and commendable community work, it comes with its share of struggles like any other job. Not only did the pandemic cause issues, but with the Los Angeles Memorial Coliseum next door, sports fans and tourists have become an issue. She says some show a complete disregard for the museum, which is disheartening.

“It’s just so disrespectful to the space. I can imagine you would never walk into Los Angeles County Museum of Art and be like, where’s the bathroom? And then walk right out?” Rachel says.

However, it will take more than the occasional rude guest to overshadow the life-changing work the museum has cultivated. Their last event, Can’t Stop, Won’t Stop, had a large turnout that she hopes will happen for their other programs.

Rachel encourages everyone who wants to broaden their horizons, and learn more than what the typical history book can provide, to visit.

“Come out and support. Even if it’s not what you want to see right now, that’s understandable. But every person that walks through the door is another dollar in funding. The more people that come, the more we know that people care,” Rachel says.