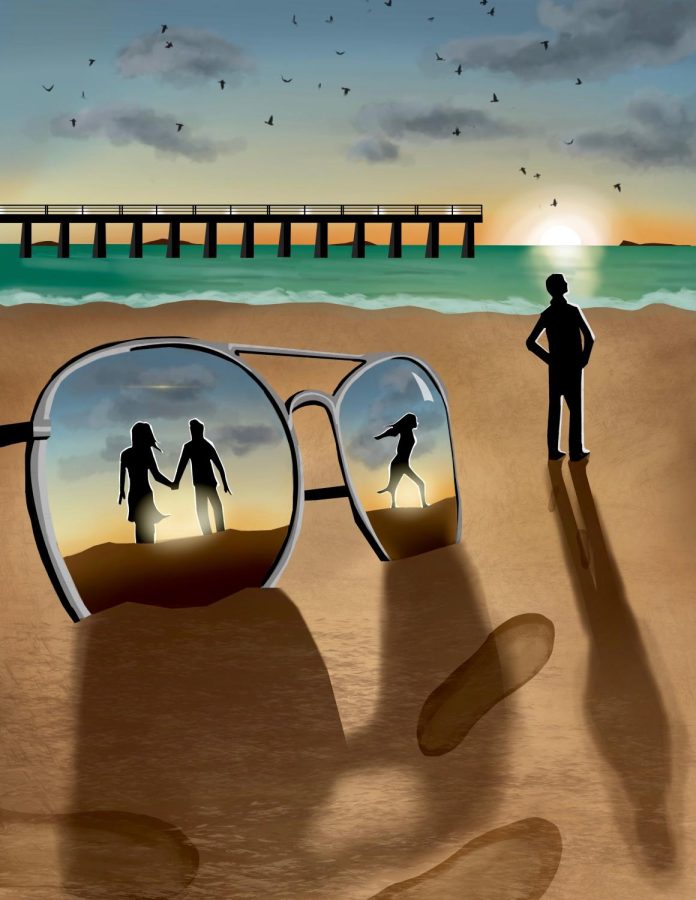 Hermosa Beach. We met one sunny afternoon to grab a bite to eat and walk around. The Lighthouse Café was our original destination because I wanted to show her the live music. I was hoping for a jazz band to be playing, but instead it was a pretty loud rock band.

The band’s volume being excessive led us to walk out and find somewhere else to eat. We roamed around for a bit. We were indecisive on whether to eat Brazilian or Italian food at first, but then decided on Italian and ate some slices of pizza plus some ice cream for dessert.

The food filled us up and left us wanting to relax. We noticed the beautiful sunset, so we walked toward the pier. The two of us stood silently standing at the pier admiring the sunset across the horizon. The silence was interrupted when she asked me, “Do you want to kiss me?” What came next felt like it was straight out of a movie. It seemed like the beginning of a fairytale.

Dialing it back to the previous month is where this relationship started. For the sake of anonymity, let’s call this woman Alexa. She was mesmerizing in my eyes. Long jet black hair, great taste in music, kindhearted and the most intelligent girl I knew. Alexa and I were good high school buddies turned lovers. I know, right? Friends to lovers arc that you have seen countless times.

I had invited her to a Paul McCartney concert knowing about our shared love for The Beatles. This night of fun is where it started by attempting foolish moves to hint at wanting to escalate the friendship to something bigger. A little bit of hand-holding during some of the songs and compliments of the flirty nature. The night ended with fireworks shining over the crowd at Dodger Stadium, but the real fireworks were in my heart.

These attempts ended successfully as the next week we scheduled a movie theater date which solidified the relationship. I was filled with every positive emotion imaginable: elation, joy, happiness, etc. Now that I look back on it, I should have noticed the red flags, but it’s true what they say about love being blinding.

Alexa didn’t want anyone to know about us dating. I shrugged it off as testing the waters and that eventually, we would get to that point of being public. Little did I know that would never come to fruition.

I don’t regret diving into this relationship and hurting myself in the end by ignoring the troublesome signs. Experiencing the one month of having someone to build an emotional connection with was great. I got to live out what I had seen on the big screen. A movie romance with The Beatles as the soundtrack made life seem a little brighter.

All was going well until one day I had gotten a message to have lunch one August afternoon. I figured it was a quick lunch date to have before I had to head out for my upcoming classes at El Camino College. I was instead greeted with a conversation of ending the relationship to save the trouble of it crumbling later while we were both at our respective colleges.

I was speechless and confused at the same time, being left with a hug and a promise of staying friends. Alexa and I did end up staying as friends and even tried a second time to reconcile the romance, but that’s a story for another day.

The relationship taught me a lot. My approach now with relationships has changed a bit. I’m way more cautious when I talk to a potential partner and haven’t been in a relationship since it ended. I still see love the same way, in that it is something beautiful and I want it to be shared with everyone.

There was a lot to learn from this teaching moment. The lesson was that life isn’t always like the movies and that a happy ending is not always happy at first. Love falls apart in unexpected ways and even though it might be heartbreaking and cruel at first, it’s better for the long term.