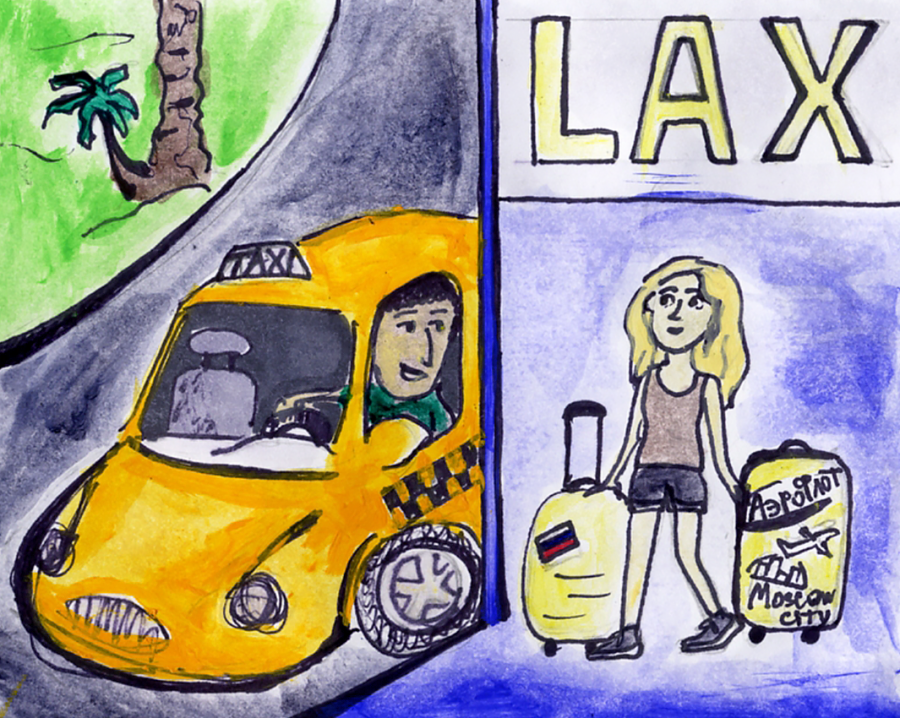 Every year, it becomes increasingly difficult to understand the local culture. It doesn’t matter how well I know English and how many years I live in the USA, I will always be different from Americans.

It is hard for me to fit into the American society. It’s hard for me to express my emotions in English. When I want to share something, it’s easier for me to write to my Russian friends than talk to this to some Americans.

I arrived at Los Angeles International Airport with two huge suitcases and I could not imagine being any happier. I was finally in Los Angeles, where it is always sunny and the ocean was just 10 minutes from my home.

Five years later, I wonder where this feeling of delight has gone now?

The great thing in Los Angeles is that it is always summer and I love it. But compared to the people and culture … we are very different.

I have many struggles even in my native language.

There are a lot of different dialects in Russia. Moscow, Russia is the capital and people there speak a little differently than in other cities. It seems to me that we stand out from other people in the country with our pure pronunciation of many words.

For example, my boyfriend is Russian but from another city in Russia and I still hear the difference in language. Sometimes I may not even understand Russian words that are used in that part of the country.

Can you imagine how difficult it is for me to understand Americans now?

There is also a difference in the unrealistic difference between Russian and English in the richness of words.

Many words cannot even be translated into English. They don’t exist. We can pronounce any Russian word as we like and the most interesting is that no matter what word you change, the Russian person will always understand you.

The most important thing is that you begin to appreciate such things only when you leave your native place.

My Moscow, Russia was impossibly gray and boring. I always wondered how I would continue living in Russia? Russian people never smile. Really, we always look unhappy.

In our culture, it is really not customary to smile for no reason. For example, you rarely see the employee in the grocery store smiling at you. Usually the employee will look like you are stealing from him something.

But after five years in the USA, I realized that this was a good thing. When people look at us, they can understand what we really feel and what emotions we have. If we do not smile, it means that we don’t want to smile. We won’t do it just to look polite.

Perhaps this is a little rude, but such is our culture. And now I have began appreciating this sincerity.

Sometimes I really want to go back to my Moscow.

The culture of my country is different. That is why our humor is completely different from Americans. When Russians and Americans are together at parties, we often have awkward pauses due to a lack of understanding a joke.

This is all due to the lack of similar realities between our cultures. In Russia there are completely different customs, everyday situations, lifestyle and much more. As in any country.

Sometimes our questions or ordinary phrases can offend Americans, although for us it will sound quite normal. And for some of our phrases, Americans will never understand. For example, “yes no maybe” which means “probably not.”

But I noticed one interesting thing. For some reason, when dealing with other foreign students, I have more in common with them than with Americans.

I notice the same peculiarity among my Russian friends. With people from other nations, we have much more common topics. Perhaps this is due to having a similar situation of moving to another country.

I have found a way out. After studying and working, I try to spend my free time with Russian friends. This is all in order to surround me with my society.

Maybe it looks wrong. Why should I live in this country if I do not want to be part of the American society?

It does not depend on my choice, this is just what cannot be changed. I think that the main reason is that I still spend a conscious life in Russia. And my mentality is in my blood.