The underground tunnels of Staples Center are cold and misty from the ice rink that will come to life in two hours. In the distance a blonde-haired ice skater carrying black hockey skates and a duffle bag approaches the walkway that leads to the ice. She waits for a Zamboni machine to pass before setting down her bag and skates.

Sydney Webb a 20-year-old rookie L.A. Kings Ice Crew member and El Camino communications major sits in the middle of a row of black chairs and starts to prepare for getting on the ice. Sydney has battled Crohn’s disease and is a 4.0 GPA student, but being on the Kings ice crew wasn’t the plan if you asked her a few years ago. 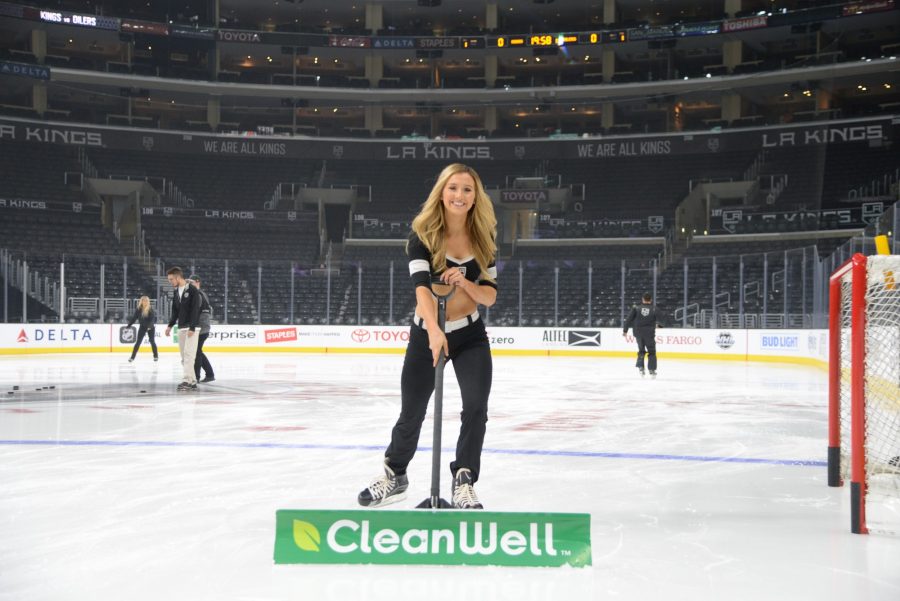 She put on hockey skates for the first time two days before ice crew tryouts last spring and it took doctors almost a year to diagnose her with Crohn’s.

She auditioned for the ice crew last spring just to see if she could make the team. She took it as a challenge to overcome Crohn’s.

“I’ve skated on ice around Christmas time with my family, but I’ve never skated with hockey skates before,” Webb said.

Because Crohn’s quickly put everything in her life at a stand still, she was determined to overcome it.

“I was at my best friends 16th birthday party when I had the worst stomach pain. I lost my appetite and I wouldn’t eat,” Sydney says. “I took every test possible and the doctors still couldn’t find out what was wrong with me.”

At one point Sydney only weighed 90 pounds.

Doctors had Sydney take a pill, which had a tiny camera on the end, and that’s how they diagnosed her.

The Kings ice crew made up of men and women do a wide range of jobs while on the crew. From pushing ice off of the rink after each period to interacting with fans in the stands, ice crewmembers have to be people persons. The most demanding part of being on the ice crew is having to push ice off the rink in 90 seconds.

At a game, Sydney can be seen pushing a green plow across the rink between periods. The ice crew also interacts with fans during the game, poses for pictures and participates in off site charity events that the Kings are apart of.

“The connections I get to make with other people and different organizations is one of the biggest things for me,” Sydney says.

Ice crew tryouts are hosted twice a year and usually leave about 20 men and women with a contract to be a part of the crew.

“We are looking for people who are representing our team to the upmost so people who are going to be able to communicate to our fans and be good role models,” Brooklyn Boyars, director, game presentations and events says.

Despite suffering from Crohn’s, Sydney has kept a positive out look on life, and many people have felt her positivity. Sydney’s attitude is what has a lot of people talking, that how can someone always be so happy. 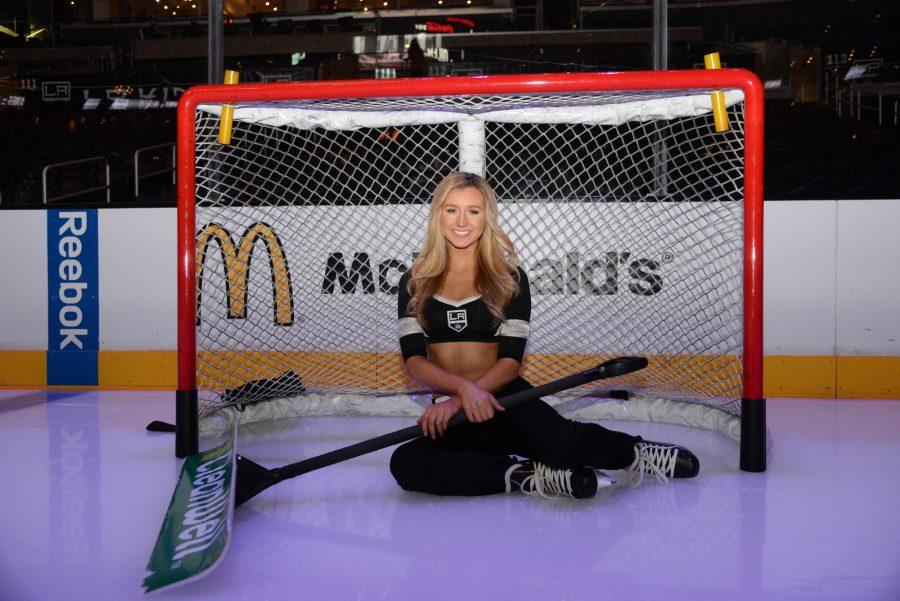 “She’s one of the most positive encouraging (people) I’ve ever met,” teammate Ashley Elanie said. “She never has a sad face and always has a positive attitude. She has inspired me in so many different ways.”

Sydney and her boyfriend Eric Beranek met on Tinder last year. Eric says their cover up story is that they met in the produce section of a Vons.

“She’s always so driven and it makes me want to make her proud,” Eric says.

Having Crohn’s changed how Sydney approached life. It challenged her to overcome it and power through. While doctors were trying to treat her condition, she spent a substantial amount of time in hospital beds and taking multiple tests to determine her problem.

“I got an inside look, I’ve been next to cancer patients while staying in hospitals,” Sydney says. “It helps me appreciate the little things.”

After high school Sydney decided that she was going to go against what treatment she was already getting without her doctors knowledge. She decided to change her diet and exercise everyday. Her new approach was helping her out more than the medications her doctor was giving her.

While on the Kings ice crew, management and her teammates have been accommodating to her Crohn’s. The disease is not curable, so Sydney still from time to time feels sick since she can’t control it.

Sydney wants to take her energy to television and one day wants to be a sports broadcaster.

“I’ve been given a second chance on life,” Sydney says. “ You don’t expect this kind of stuff on a young person.” 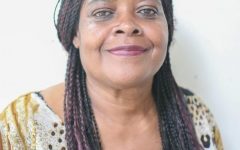 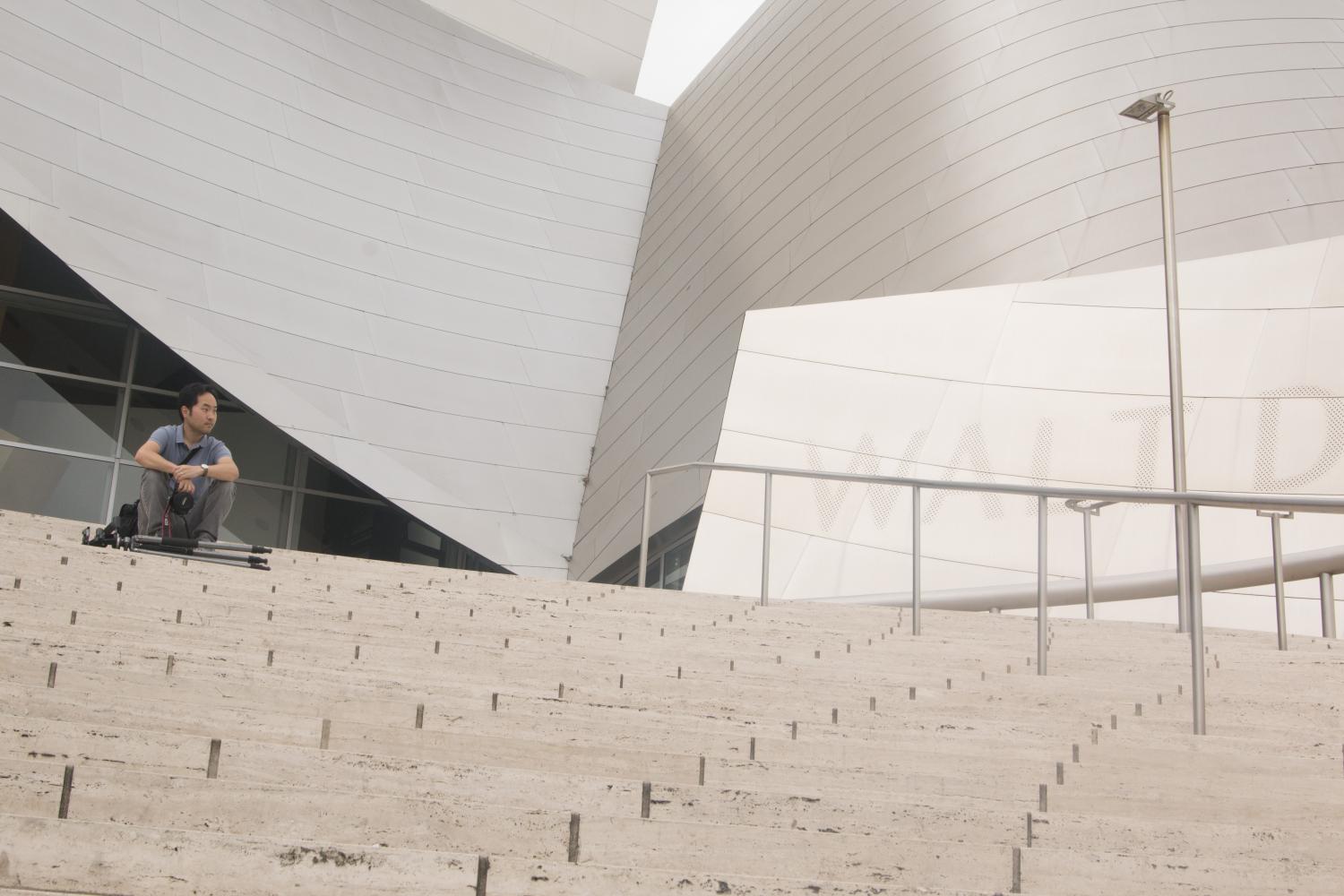 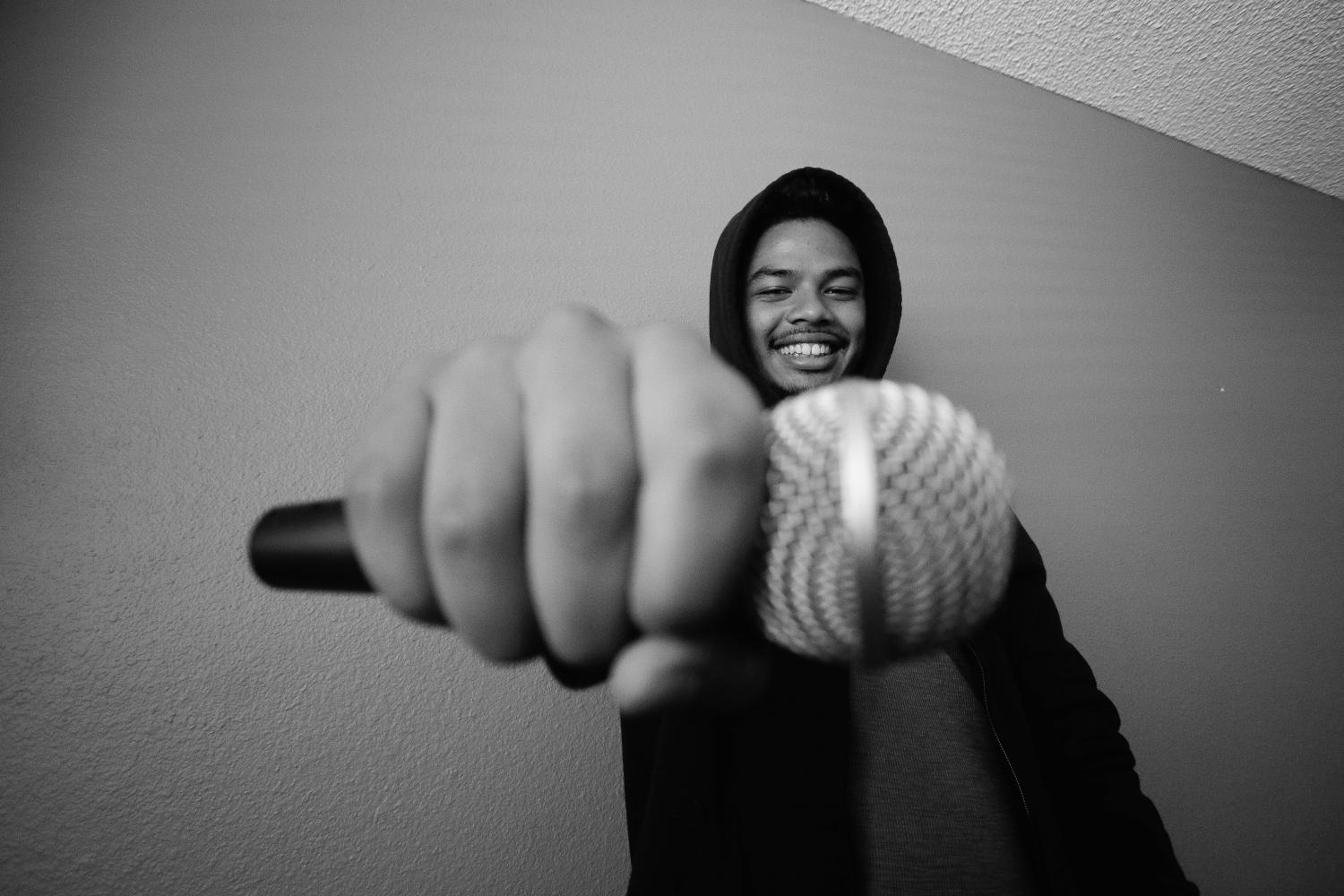 Rapper hopes to make a difference through his music on SoundCloud 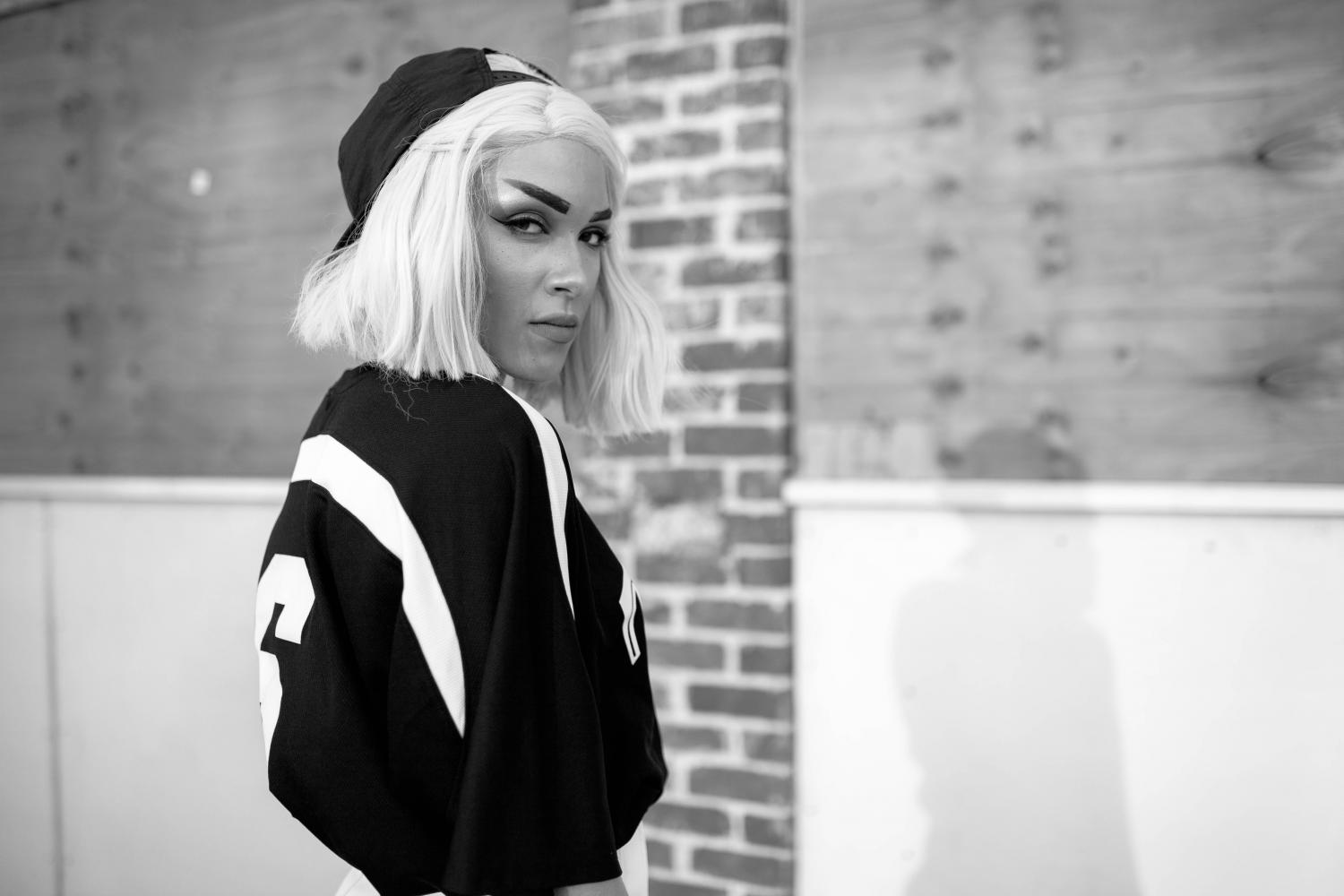 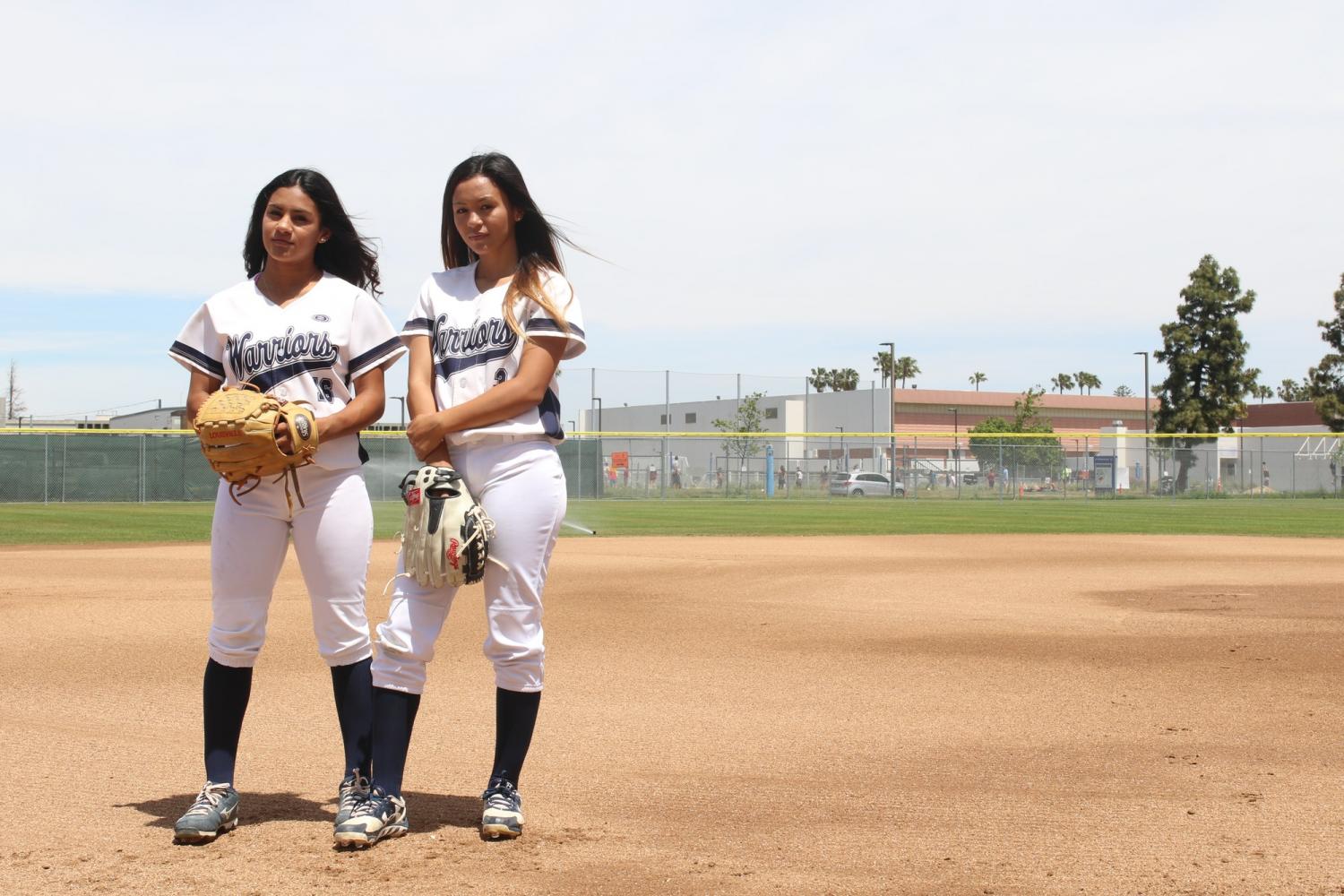 Two sisters bond through their love of softball