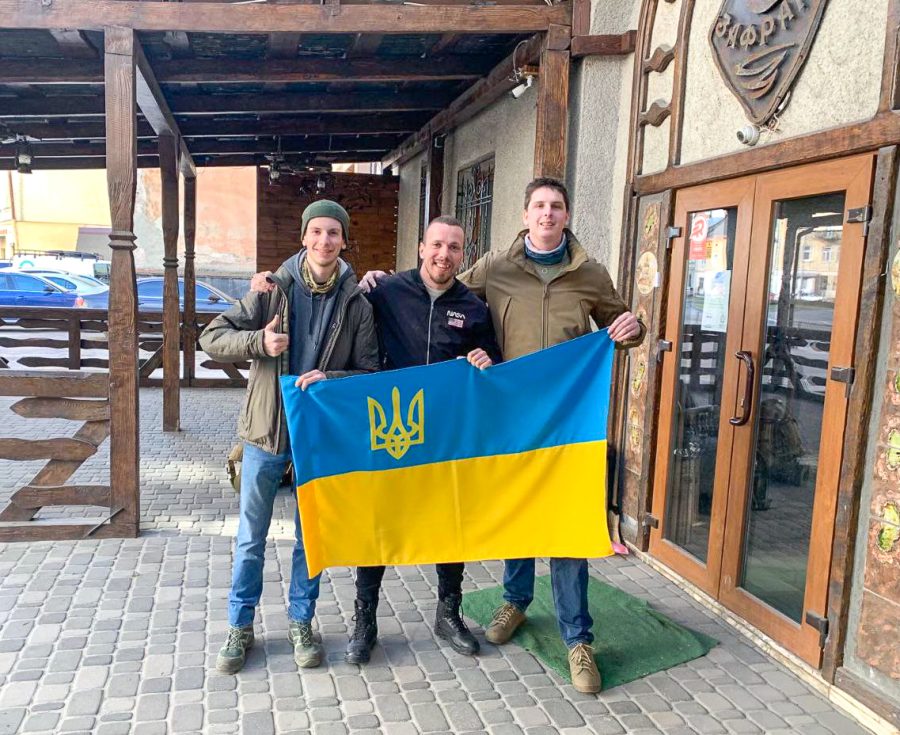 Will Hogan (right) holds up a Ukrainian flag with other volunteers in Lviv, Ukraine, on Tuesday, March 22. Hogan volunteered in a medical tent and as a combat medic in the Ukrainian Foreign Legion. Photo courtesy of Will Hogan

Reflecting on his time as a Ukrainian volunteer, Will Hogan recounts his experience in volunteering for the conflict and his on-the-ground encounters in the warzone of the Russo-Ukrainian War.

The 20-year-old completed the Emergency Medical Technician program and some sign language communication courses at El Camino College in 2019 before he left to join the U.S. Army.

Q: Why did you decide to volunteer for the Ukrainian cause?

Hogan said he got emotional before his flight as everything became real to him at that moment, communicating that this was the type of warfare that Europe has not seen since World War II.

As he was on his way to the airport, he was notified that the volunteer base that he was supposed to head to was attacked by Russian artillery, killing numerous volunteers and soldiers. He said that this was when he got cold feet.

For him, he knew that this had the possibility of being a one way ticket.

For others that he knew, there was no going home.

Q: What was the process of becoming a volunteer in Ukraine?

A: “I found myself in a group chat called ‘Volunteers for Ukraine’ which was initially raising support for the conflict in Ukraine. Eventually, we got put into smaller groups based on speciality.”

While searching for a way to travel to the conflict zone, Hogan found himself in a group chat with a mixed group of people which he said caused him a little bit of hesitancy based on thoughts of whether he would be traveling with a good group of people.

Q: What were your thoughts when Ukraine was first invaded by Russia?

A: “Honestly, it just seemed like another attack on human rights and an attack on people who didn’t really deserve it.”

Hogan had been following the separatist movement within Ukraine for a while and even pondered leaving to volunteer for it before the war broke out. When he saw that war was declared on Ukraine by Russia, he saw it as his chance to “get up and do something.”

Q: What was your experience in Ukraine?

A: “After a brief period volunteering in a medical tent, I went to search for the [Foreign] Legion but at that moment it did not exist. They were rebuilding at this point after being bombarded by the Russians. No one initially knew how to get in contact with them.”

According to the Ministry of Foreign Affairs of Ukraine, the Ukrainian Foreign Legion, is a foreign military branch of the Territorial Defense Forces of Ukraine created in light of the Russian invasion.

After joining the Foreign Legion, Hogan said that there was a great amount of chaos throughout the places he traveled through. Volunteers would not travel outside in groups with less than three individuals, highlighting that nobody was left alone.

The biggest problem Hogan faced himself was paranoia. He said that the volunteers used multiple conversation phone applications to keep their conversations hidden and to cover their movements from being tracked.

Q: What was your role with the Foreign Legion?

A: “I was a combat medic. I wanted to help people and do the right thing.”

Hogan said out of his many experiences with the Foreign Legion, one stood out to him the most.

While he was on guard with another volunteer nicknamed “Siggie,” incoming fire came towards them and wounded Siggie in the leg. Hogan dropped the food he was eating to pick up Siggie and drag him to a safe place to administer aid.

“He was an unlucky guy,” Hogan said, laughing. “That would be my first ever combat medical experience in Ukraine.”

Q: What is it like experiencing the war firsthand?

Near the city of Lviv, Ukraine, Hogan explained how the bombings were affecting the once large and sprawling city of nearly 720,000 residents.

“You hear the air raid sirens but sometimes you do not hear anything else,” Hogan said. “That hit could be 10 miles away and you have no idea that it just got hit. You don’t hear the boom or even see the smoke.”

Q: Why did you end up coming back home?

A: “I was teaching medical instruction to paramedics and saw how inexperienced these guys were. I wanted to hold a class in one of the bigger parts of the facility we were staying at but after all my requests to the Major, he felt that I was a threat to his authority so I was actually removed.”

Hogan explained the toll being removed took on him.

“People gave me their money, their trust and their respect and I had been a failure,” Hogan said. “It just hurt to be told that after all I had done for the [Foreign Legion] that they did not want me anymore over a disagreement with a Major.”

After some time volunteering in Ukraine, Hogan finally felt “spent” and exhausted the war currently devastating the country.

“I feel like I could have kept going if I had swallowed my pride,” Hogan said. “I think looking back, that was the wrong decision because I got back here and I’m bored. I wish I was still in Ukraine.”