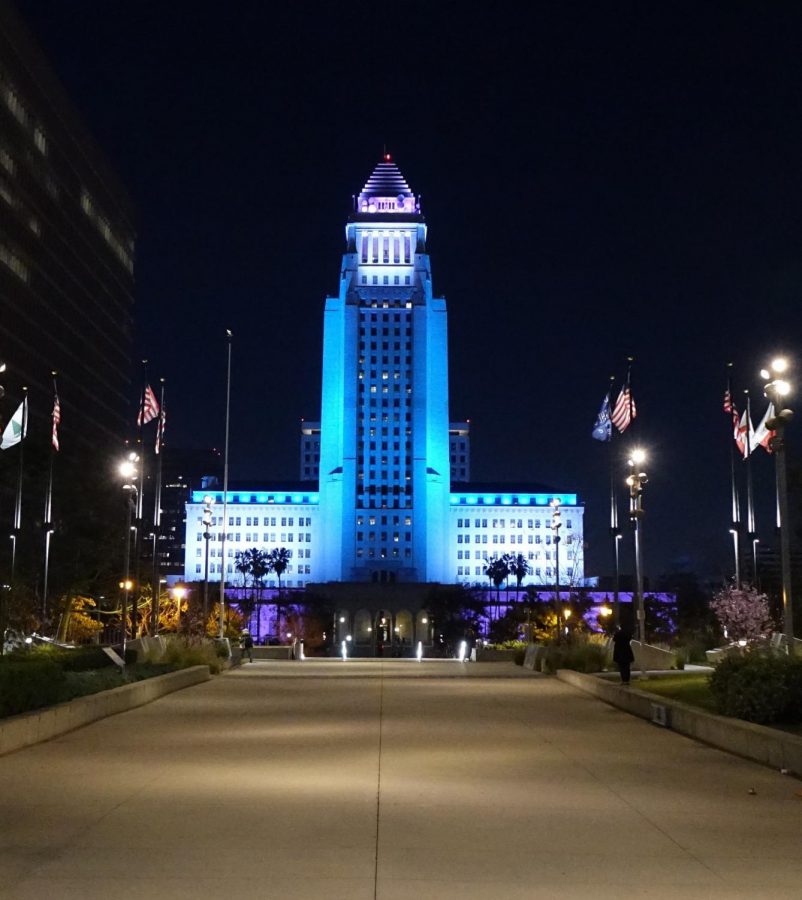 Fawad Assadullah takes half a second to stare into the open trunk before grabbing everything and walking towards the front of the Los Angeles City Hall building for his current assignment.

The 28-year-old senior digital producer majored in film and graduated from UCLA after attending El Camino College. He stands tall with the heavy equipment draped around his lean figure.

“This stuff can get heavy, but it’s good to have everything ready,” Fawad says.

The regular equipment he uses on a day-to-day basis includes a Canon C100 and a Canon Mark IV. Both cameras appear to have the same amount of buttons as a computer keyboard.

“The C100 is such a workhorse, but the Mark IV is really versatile,” he says.

He takes each one and works his way through the adjustments for the perfect shot quickly and effortlessly.

During a normal workday, the EC alumnus reports to the LA City Hall ready to accompany mayor Eric Garcetti to take important photos and recordings.

Stopping in front of City Hall to capture the front of the building, Fawad begins scrolling through his photos on his Canon Mark IV, flipping through a few photos and videos of Garcetti along with a few pictures of Magic Johnson, Danny Trejo and Arsenio Hall during their vaccine appointment.

Fawad took an interest in film and photography from a young age. He regularly took photos at family gatherings, capturing the sweet moments shared between relatives. As his interest piqued into a passion, he looked towards potentially making a career out of it.

“I always, as a kid, wanted to work at National Geographic. Just do documentaries, traveling around the world,” he says.

During his free time Fawad enjoys capturing candid everyday moments. He enjoys using natural lighting in his photos because it captures the individual as is, he says.

“Off the cuff, you don’t know what’s coming because that’s you in your real space. You as a human being,” he says.

Since he always had an interest in film and photography, he decided to pursue his passion academically by attending El Camino College.

Although he was confident in his passion, it was difficult for Fawad to convince his parents of the safety in his career choice.

“Especially as immigrants, [it wasn’t] something you could be a professional in and make money,” he says.

While his parents expressed their desire for him to become a doctor or an engineer, he pushed forward with his decision after learning one of his close friends, Nick Lancaster, was also pursuing film/video as a major.

“We both took filmmaking in high school together and would talk about projects we could work on together all the time, Fawad always had really good ideas and was always looking to help with anything I was working on,” Nick says.

Fawad recognized the passion he had for film and photography and knew it was the only thing he wanted to do.

“I thought alright, I’m going to do it too, just jump into it,” Fawad says.

Jumping into the classes offered at ECC, he took advantage of the variety of courses available revolving around film and production. The options the El Camino film department offered allowed Fawad to explore his passion in new ways.

It was during his time at ECC that he became firmly convinced that capturing moments was something he wanted to do professionally. Meeting and connecting with other like-minded students in his film and photography classes gave him the support to enthusiastically pursue his passion.

“It prepared me for transferring into UCLA, the UCLA theatre, film and television program. And [it] goes back to the professors, they really care about what they do,” he says.

Students at ECC who are aspiring to pursue a degree in film/video can look forward to learning from Professor Darilyn Rowan, who has taught photography at ECC for 33 years. One thing students can expect is constant change in these fields.

“Students need to be prepared to be able to adapt to that change and evolution of equipment,” Rowan says.

While understanding new technology is essential, learning the history of photography-related technology that came before is just as important. Understanding how photography works at a basic level will help any photographer adapt to the changes in technology, Rowan says.

While the standard equipment of today’s photographers are DSLR (Digital Single Lens Reflex) cameras, film photography is still held in high regard by both passionate photographers and academics.

“Most schools, and all of the four-year schools that I am aware of who have degrees in photo and photojournalism, require that students have at least one semester of training in black and white film photography in the darkroom,” Rowan says.

While Fawad works with a variety of professional digital cameras, the only camera he actually owns is a film camera. He compares film photography to creating magic and enjoys the more hands-on approach film cameras require, from loading the film, metering the shot and finally taking the shot.

“There’s more work that goes into it, and you never really know what you’re going to get once you get that film developed but once you get it back, it’s really fulfilling,” he says.

Another aspect of film photography he loves is the durability of film. After losing all the digital data of his little brother’s baby pictures, he recognized the usefulness of it.

“We even have film of my dad in Afghanistan from way back in the 60s, and that’s lasted,” he said. Besides having something tangible that can last, he also likes the way film captures light in his candid shots.

Although he always had an interest in photography, it was the black and white film course at ECC that drew Fawad into continuing to shoot film. He remembers using the Pentax K1000 film camera he borrowed from ECC and the enjoyment he got from actually developing his own shots in the darkroom.

Fawads talks about the work that goes into film photography with a passion. Having something tangible to hold and work with your hands is his favorite aspect of physical film photography he says.

“I’ve done it ever since, I did it during my time at UCLA, even on shoots there and on sets, I would bring my little camera along and I would shoot on film,” he says.

Fawad remembers his senior thesis project at UCLA as one of his favorite projects he’s ever worked on. The project involved researching and shooting the L.A. river. The video included a blend of technology, filmmaking and interviews with graffiti artists, politicians and L.A. river activists and provided him the opportunity to network and meet a variety of new people, he says.

“But all the same people, they looked at it from different ways but they all love the river in their own way,” he says.

The connections Fawad was able to make while working on his senior thesis project helped him kick off his career. A classmate who was a grade above him suggested Fawad to take her place at a paid internship at Disney once she left the internship.

Everything was able to align, he says.

As meeting and connecting with new people brought him to different locations, Fawad is reminded about what initially piqued his interest in capturing moments. Seeing everything as something worth capturing, from grimy alleyways to Hawaiian landscapes, Fawad can see the story in any setting.

“You can find things that make it worthwhile anywhere you go,” he says.

As he thinks back on his career over the years, Fawad still finds moments to be grateful in being able to do what he loves. Sometimes it hits him abruptly, he says.

“I’m like damn, this is kind of cool that I even get paid to do this kind of stuff,” he says. “It’s like a hobby but it’s my job.”