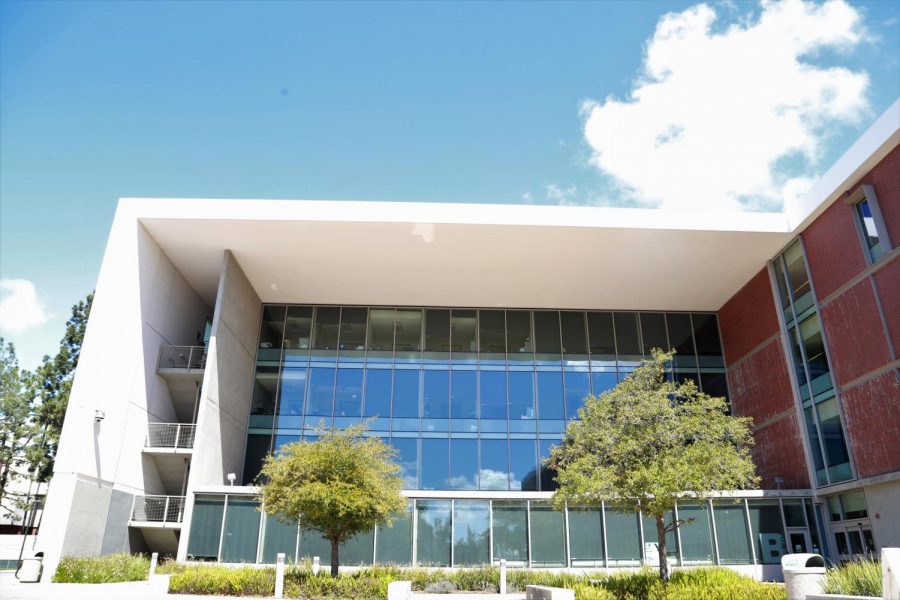 The Math Business Allied Health Building remains closed as classes at El Camino College have moved online. Ever since mid-March, students and faculty have accumulated concerns about the quality and clarity of information sent out via email. Mari Inagaki/The Union

He decided to drop one of his classes because his family needed the extra money, but it took close to two months after classes were pushed online for El Camino College to figure out a way to issue refunds and communicate that to students.

ECC’s Marketing and Communications Department sent out emails about refunds twice, once in March explaining that refunds could only be processed once employees could return to campus, and another time in May explaining that ECC would be providing refunds through the CARES Act.

“Not hearing anything for a while was worrying,” Juarez said about the lack of quality communication from ECC regarding refunds. “It’s all been inadequate at best.”

With California and Los Angeles County officials allowing gyms, hotels and movie theatres to reopen today, ECC administration officials are hopeful to return to campus for the second half of the fall 2020 semester. However, students signing up for classes are largely unaware that in-person courses are a possibility amidst an ongoing pandemic that has infected more than 68,875 people in Los Angeles County, causing 2,813 deaths. Counselors and faculty have not received detailed information about what the fall 2020 semester will look like, mainly because officials do not have the full picture yet either, leading to confusion and a lack of quality information funneled down to students.

The communication problem has persisted throughout the spring semester when classes moved online and important updates about dropping courses, refunds, the optional pass/no pass grading system and fall classes were sent to students. But much of that correspondence lacked clarity and quality information, said Kelsey Iino, an ECC counselor.

“We’re asking for clarification because we have to be able to explain it to students,” Iino told The Union. “If we’re not really sure and then try to relay that information to the best of our ability, we’re so unclear. For students to make judgment calls, it’s a disaster.”

Registration for summer and fall classes opened up at the end of May. Amid this current peak period of registering for coursework, confused students have been filling counselors’ inboxes, including Iino’s, as many of them are unaware of a new distinction within fall 2020 courses: synchronous and asynchronous.

On top of being unaware about the possibility that students may have to attend classes in-person in the fall semester, registering for classes using ECC’s new schedule builder is a process riddled with glitches.

Iino explained that if students sign up for fall classes first, the system will bar them from signing up for summer courses and require them to re-apply to attend ECC.

“We do not make it easy for students to come to El Camino College,” Iino said. “If you’re a new student, you don’t even know what to ask or what the problems are. To have to navigate that alone is probably a huge roadblock to becoming a student.”

As President of ECC’s faculty union, Iino has also heard of issues professors have run into, including one of her colleagues who explained to her that despite requesting for her classes to be asynchronous, they wound up being synchronous, causing a long back-and-forth to remedy the situation.

These glitches, changes in rules and quickly-changing updates are at the expense of students if they aren’t communicated well, Iino said, but quality correspondence about various dialogues that officials are having, even if a final decision has not been reached yet, can de-escalate anxiety and confusion for students.

Officials say they are communicating well

Amid what she describes as a fluid situation over the last three months in which her department received directives from different agencies at the state and county level, Executive Director of Marketing and Communications Ann O’Brien said she has sought to make sure students stay informed by providing responsive, accurate and timely information to students.

However, miscommunication and errors occur along the way, especially when there are multiple departments or agencies involved in a communication, she said. But going back to everyone involved and making sure everyone is on the same page is how she goes about making sure the right information is released to students, she said.

Making sure their communication gets through is also important for O’Brien, as she said her department interacts with students via email, social media and surveys.

Preliminary data from surveys indicated that a lot of students struggled with the transition online as students’ lives have been economically impacted by COVID-19 through the loss of employment in their households, ECC President and Superintendent Dena Maloney told The Union.

When students fill out surveys, it’s critical to understanding their needs as O’Brien said students engage with her department frequently via social media and emails.

“I feel that by them participating and continuing to engage in that manner, we’re really hearing from students about what they need going forward,” O’Brien said.

At the same time, the department can only communicate information they know and that may not be what students or other members of the community want to hear, said Director of Public Information & Government Relations Marc Stevens.

“One of the things that I can see be frustrating to students is that we don’t have all of the answers to a question right up front and that speaks to the very fluid and changing nature of this situation,” Stevens said.“One of the things we’ve tried to do is to say what we know when we know it. It kind of sounds like an unfolding process and that’s exactly what it is.”

Another side of students’ interactions with communication from ECC is whether they interact with it at all in the first place. O’Brien added that she is concerned about whether students see communications from the college through their student emails, because if they aren’t looking, it won’t help them get the information they need.

Amid the swift transition to online classes, online tutoring has kept Myles Taylor’s grades afloat. As a music major, he enjoys finding different ways of getting to the same answer while also getting the perspective of a student senior to him.

Even though ECC’s Marketing & Communications Department sent out one email in early April about tutoring services available to students, Taylor found out about the program through his professor.

“If my professor didn’t tell me about it over Canvas, I wouldn’t have known because I didn’t receive any notification from El Camino of any kind,” Taylor said.

While email may be a good way to reach students, Taylor said there is a contingent of those who may not be checking their emails frequently, like himself, on top of having to sift through spam messages every time they do check.

If there was a phone app or a more streamlined way of notifying students about important updates, Taylor said he would be interested in that because it could keep more folks informed.

“We’re paying them hundreds of dollars to take their classes, so in a way, they have a duty to us to let us know these certain things,” Taylor said. “For students who aren’t good at taking classes online, it’s important we get that information because otherwise we’re left in the dark.”

Worrying about the difference between synchronous and asynchronous or whether classes will be held in-person is just another stressor on top of being on edge due to the ongoing pandemic and George Floyd protests.

Students weigh the decision of coming back in the fall

Vice President of Academic Affairs Jean Shankweiler said ECC’s COVID-19 Task Force is working to determine possible safeguards if ECC returns students, faculty and staff to campus during the final eight weeks of the fall semester. That includes choosing which buildings to open, how to socially distance in classrooms and meet guidelines set forth by the Los Angeles County Department of Public Health.

“We don’t have a specific [return] date in mind because we’re dealing in real-time with a pandemic that as you know, there’s changes in the predictions all the time about a second wave,” Shankweiler said.

As of now, the first students who would return to campus are those who must complete licensure requirements, including students in ECC’s Emergency Medical Technician (EMT) program, the Fire Academy, nursing program and other allied health fields.

Shankweiler said only students in those areas should be expecting a definite return to campus this fall with the task force looking into practical solutions while protecting students’ health and safety.

She added that officials are currently putting together a list of faculty who are willing to come back to campus, however, that list had not been made available to students before they began enrolling in courses for the fall 2020 semester. Additionally, some classes may be canceled if they are unable to be offered in-person during the last half of the fall semester, Shankweiler said.

“The uncertainty, that’s the hardest thing right now, people want to be able to plan,” Shankweiler said. “As schools, you plan a year ahead of time, all the time, and we can’t do that because we don’t know what’s going to happen.”

With so much unknown and his family struggling right now, Juarez thinks he may not enroll for the classes during the fall 2020 semester.

Besides paying $46 a unit, the other thing keeping him from attending ECC in the fall is the confusion caused by the online course catalog and schedule builder.

Juarez said the systems are outdated and explained how words like synchronous and asynchronous are foreign to the average student.

“Not having a better, simpler way to define those classes might trip some people out,” Juarez said. “I think it’s definitely hard for people who might not be fluent in English or [understand] tech and computers.”

The bare notion of going back to campus given the looming threat of the ongoing pandemic is something communications major Carla Torres is wary of.

She lives with her grandparents, who are in their 80s, as well as her mother dealing with chronic health issues. Torres said that she along with the ECC community are not ready for classes to be resumed on campus.

“Not knowing proper guidelines [that El Camino’s] going to take in order to retransition makes it tough to respect this idea,” Torres told The Union. “Health is my first priority. I don’t know if that’s the case [at El Camino].”

In-person, synchronous and asynchronous classes worry her, but not to the extent as much as a serious financial struggle impacting her family.

She continues to ponder about her education, and said she is also uncertain about spending money that her family desperately needs on courses and supplies.

Torres’ father decided to take time away from his job in construction so that he wouldn’t put his family at any further risk of contracting the novel coronavirus.

“He tells us money comes and goes,” Torres said, “but health and family are sacred.”