Health expert, students react to COVID-19 pandemic: ‘I’m so tired of the coronavirus’ 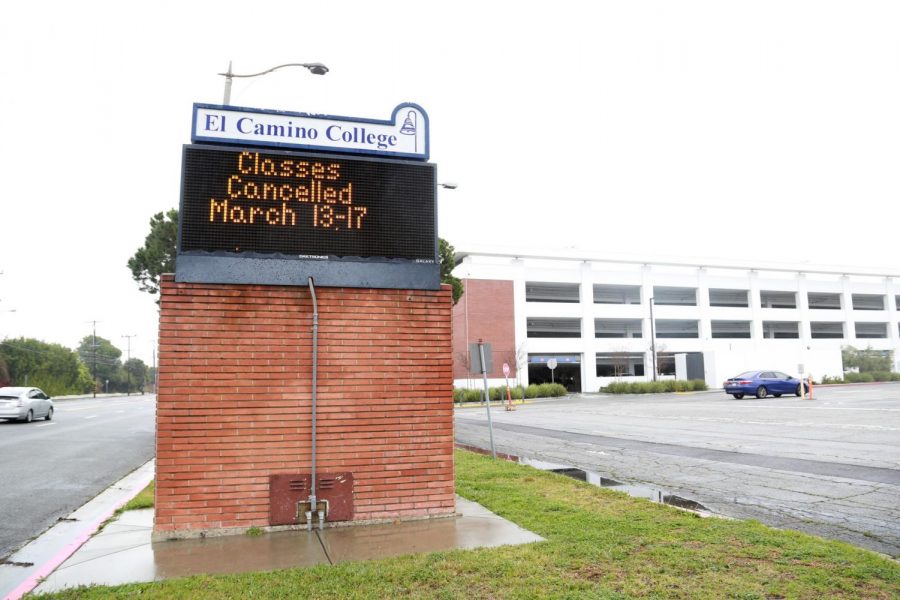 By Fernando Haro and Omar Rashad

As El Camino College prepares to shift to online classes in a preemptive measure to minimize the number of people on campus amid the coronavirus pandemic, students expressed mixed feelings towards the online instructional shift.

“It’s pretty bizarre,” David Montefalcon, 20, film major told The Union. “The panic may be a bit much but we don’t know too much about it yet so it may be warranted. The change to online will need some adjusting to.”

As of Wednesday, March 11, the coronavirus became a pandemic, ECC’s Director of the Health Center and Nurse Practitioner Susan Nilles said.

“We’re talking about fear here, fear of the unknown,” Nilles told The Union. “It is safe to assume that there are more cases in our community than what is known.”

Nilles, who also serves as a medical consultant on the ECC COVID-19 Task Force, said it is now more important than ever for everyone to wash their hands and educate themselves on the virus.

In the past, other coronaviruses like MERS and SARS could only be transmitted while the carrier displayed symptoms, Nilles said.

But carriers of the novel coronavirus can pass on the virus without showing any symptoms, Nilles said.

“There’s different qualities to this than the SARS and the MERS and it’s only complicating things even further,” Nilles said. “There’s no immunity right now, this is a whole new virus, first time seen in the human race.”

23-year-old film major Chase Torascio said that moving classes online was a necessary precaution as he thinks he’ll be better able take care of his family as a result.

“I think it’s unfortunate and inconvenient,” Torascio said. “Online isn’t too big of an adjustment for lecture courses but some classes will be affected more than others. Hopefully it blows over soon.”

Other students, including 20-year-old art major Alexis Muñoz, said having to transition to online classes is upsetting.

“I’m so tired of the coronavirus,” Muñoz said. “Honestly, if people are worried about this then they just need to wash their hands.”

ECC administration officials announced that classes would be moved online until Monday, April 20, by which they will reassess whether to continue online learning or revert to regular in-person classes.

Other college’s, including all 9 LACCD campuses, have moved their classes online for the rest of the spring semester.

“I think that the coronavirus is nothing to be afraid of,” Josh Nova, 20, nursing major, said. “I see a lot of misinformation, misunderstanding and general panic.”

Nova said he has seen how the virus has caused people to panic and react in a negative way that has only made the situation worse.

“There is no point in lying to ourselves to say that it is not dangerous,” Nova said. “But that doesn’t mean that we can let fear override our greater sense and cause to do things that are not in our best interest.”

The impact on low-income communities

Muhammad Abdullah, an English major, said ECC made a good move by switching classes online. However, he said the change could impact a range of people who may not be tech-savvy or have access to internet and devices required to complete online coursework.

“Predominantly black and brown community are disenfranchised and have lack of accessibility to resources and it’s going to definitely impact us most,” Adbullah said. “I’m not too worried because regardless of race, if you live in a lower-income or underserved community, we’re going to find a way to get our money and find a way to get our worth.”

While these situations affect black and brown students regardless of coronavirus concerns or classes being moved online, Abdullah said its effects may be harder to work around when big instructional shifts occur during the middle of a semester.

ECC will keep services and resources for students open while classes move online, including its the Health Center and Schauerman Library. Currently, the only option for students who may not have WiFi and devices for online learning at home is to go to ECC’s computer labs to complete coursework.

“I don’t know what happened behind the scenes but I think that’s something that should’ve been taken into consideration weeks ago when this virus came to our attention,” Abdullah said.

Adbullah also explained that many in his community, besides having a lack of resources, also have a lack of time because everyone has a side hustle, or more than one job occupying their time.

“Last semester, I don’t think I would have been able to seamlessly transition into online courses because I had two full time jobs,” Abdullah said. “I wouldn’t have made it a priority because of the situation that I come from.”

Adbullah added that it’s more than just time management because it’s difficult when everything students are involved in demands all their time and effort.

“That doesn’t mean that my family or people like me discredit higher education,” Adbullah said. “It’s just that we have impending threats like eviction notices or choosing what bills we have to pay because we need to buy a $60 textbook.”

The line between home and school

Vanessa Moreno, a psychology major, said she prefers learning in-person over online because she appreciates getting face-to-face time with professors.

“When they said they would be changing to online, I was a little concerned,” Moreno said. “I’ve never done online classes so I’ll have to give it a try. This will be my last semester at El Camino so I have to pass all my classes.”

Moreno added that the learning process might be longer if done online since she’d have to email peers and professors and wait for responses when she looking for assistance, whereas getting help in a regular lecture is more direct.

While Moreno thinks of herself as a responsible student, she said she is used to school being at school and home being at home.

“Home is usually where you eat, sleep, interact with your family,” Moreno said. “School is where you go to learn and focus.

Now that her classes are going online, Moreno worries about home becoming school as concentrating may be a challenge.

“For me it’s just a little bit of a challenge,” Moreno said. “I have my own room. I have my desk right next to my bed and it’s kind of like should I take a nap, should I watch TV, or should I get to my school stuff?”

Moreno added that she could get a little accustomed to online classes but said she would feel scared if the rest of the semester would remain online.

“I’m not one to think I can finish the whole semester online,” Moreno said. “I would be a little scared to finish this last semester at El Camino not being able to get the full face-to-face experience with the professors.”