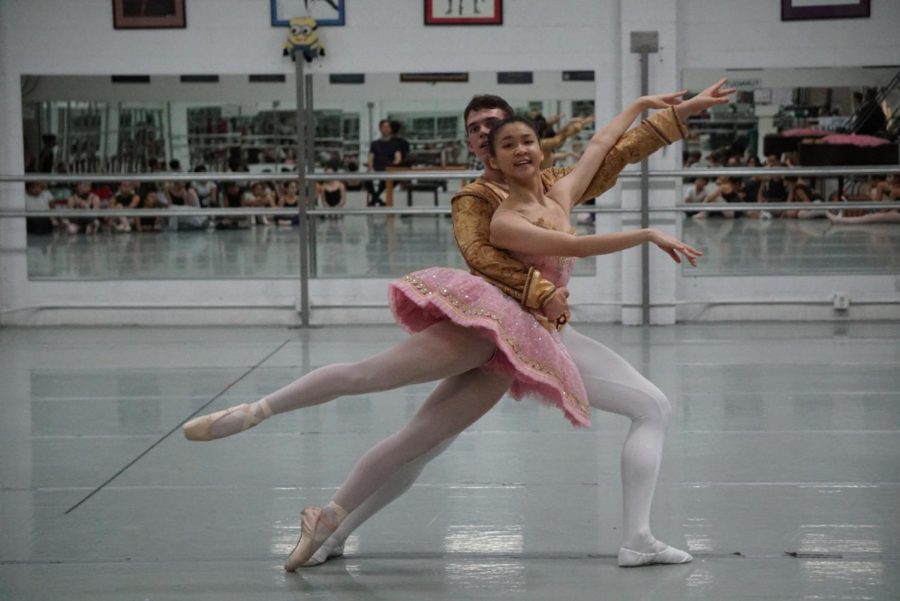 Robert Mack and Natalie Chinn rehearse their duet for “The Nutcracker” on Saturday, Nov 23, at Lauridsen Ballet Centre. First performed in 1892 at St. Petersburg’s Mariinsky Theatre, “The Nutcracker” has had a yearly venue at El Camino College for the last 25 years. Justin Traylor/ The Union

In the spirit of the holidays, “The Nutcracker” ballet which will feature the original score of composer Pyotr Illyich Tchaikovsky will be presented by South Bay Ballet on Dec. 21 and 22 at 2 p.m. in the Marsee Auditorium.

“The Nutcracker” has been presented at El Camino College every year for the past 25 years, Rick Christophersen, director of the Center for the Arts at ECC said.

The two-act ballet that is being co-directed by Diane Lauridsen and Elijah S. Pressman, was first performed in 1892.

“I’ve seen this production in years past, it’s very well done. I think South Bay Ballet, [puts] on a terrific performance, they have some very young dancers and some very seasoned professionals in company,” Christophersen said.

Lauridsen, who has been directing for 41 years, said that the ballet has something for everybody and its going to be an entertaining two hours.

“A lot of people come to it because it’s Christmas. It’s very entertaining for children and adults who are often surprised that they really enjoy it. It is also a dance member’s dream because it has a lot of technical stuff in it,” Lauridsen said.

The ballet tells the story of Grandmother Clara as she recounts the story of a young girl who dreams of becoming a ballerina, according to the ECC website.

Jaymee Boyd, 17, who has been performing for nine years, said that it was her dream to play the Sugarplum Fairy.

“Sugarplum is my dream role. You get to wear a pink tutu, it’s fun,” Boyd said.

In addition to the show being fun and beautiful to watch, Boyd said that the show also had a Christmas element to it.

Along with the music, the ballet is very colorful and has a wide variety of costumes, Lauridsen said.

Christophersen said that he had seen the ballet from years past and thought that the production was very well done.

“There’s beautiful lighting, the scenes are very well set, the costumes are top-notch. It looks great and it’s a wonderful way of getting into the holiday mood,” Christophersen said.

Lauridsen also recounted the first time she saw the ballet and remembered being focused on the dancing.

“I saw it when I was a student and for me it was totally about the ballet and the dancing that the people did. For dancers it’s about one thing and for the public, it’s about another generally,” Lauridsen said.