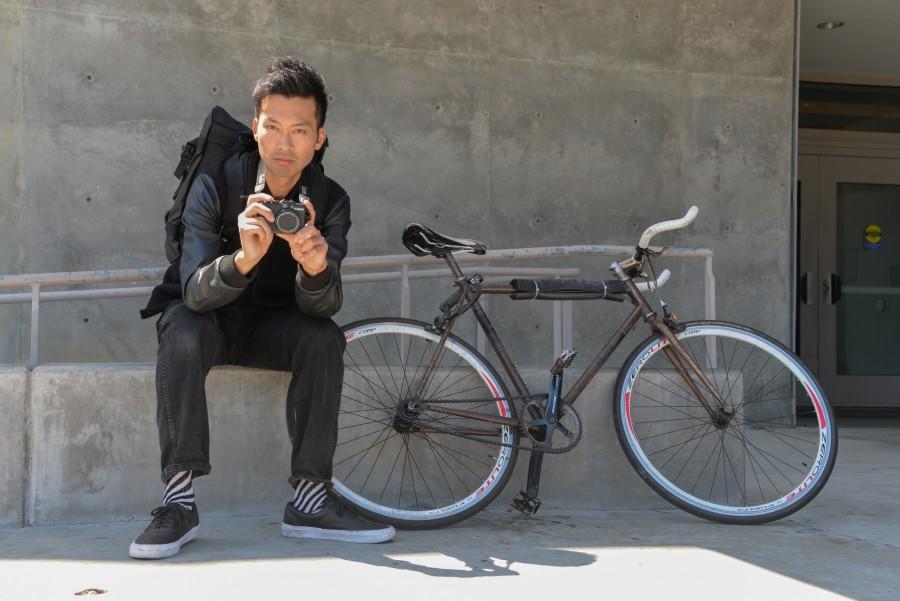 Yusuke Oue, photography major, is a foreign exchange student who has photographed over 7000 subjects in his five years of living in America. Photo credit: Elena Perez

By Trent Ledford and Sebastian Spencer

As he walks up to a random individual in public to ask if he can take their photo, Yusuke Oue hopes to capture the American culture he has always dreamed about.

Though being born and raised in Japan, coming to the United States of America was something Oue always wanted. Living in America and figuring out what he wanted to do with his life was the real challenge.

In 2011, Oue, who delcined to give his age, decided it was time to leave his home in Japan and follow his dream. When the plane landed, Oue knew America is where he wanted to be when he walked out of the LAX airport

“I felt the sky was so big when I looked up in the sky and I wanted to live forever. I knew I was never going back to Japan because this is my home,” Oue said.

In Japan, Oue worked at many clothing stores. He was obsessed with American brands that were sold at the clothing stores like Ralph Lauren, Brooks Brothers and Stussy to name a few. Oue felt he was selling these brands without the American experience and culture.

While walking the streets of Los Angeles, Oue met a Japanese man by the name of Jay Kotaka. Kotaka was a renaissance man of sort. He had many things he associated himself with. Photography, art and music were just a small amounts of the things he did according to Oue.

Kotaka became Oue’s mentor and offered him a place to live while figuring out what he was passionate about. Kotaka gave Oue a camera, a Canon 1000 to be exact.

Oue started to like taking pictures and combined his passion about American culture with it and starting to take photos of random people.

“Learning English was a big challenge because I needed to negotiate with people before taking their pictures because I didnt want to sneak photos or look like the paparazzi”, said Oue.

Over the years his English improved which meant more pictures he could take. Oue has photographed over 7000 (1000 ECC students) people during his time in America. At least 5000 of those people are women.

“I’m really into photographing American women, than have stronger features than men and they all have something different about them whether its face or their style, it’s amazing,” Oue said.

Oue’s roommate, Masa Hayakawa, is often mesmerized by how driven Oue is.

“Yusuke is totally different in his approach. Not many people can do it, and take that many pictures. He has passion and continues to meet more people which can only get better for him”, said Hayakawa.

Oue is currently taking a photography class under EC professor and photojournalist Darilyn Rowan, who finds his commitment and focus “astonishing and remarkable.”

Yusuke has a series of street photography that is based in the community in Torrance.

“I believe he is creating a series of images that will grow in significance over time. Yusuke works very hard at his photographic studies,” Rowan said. “He is already a great photographer and clearly loves the process of street and documentary photography.”

She added that “it is an honor to be one of his teachers.”