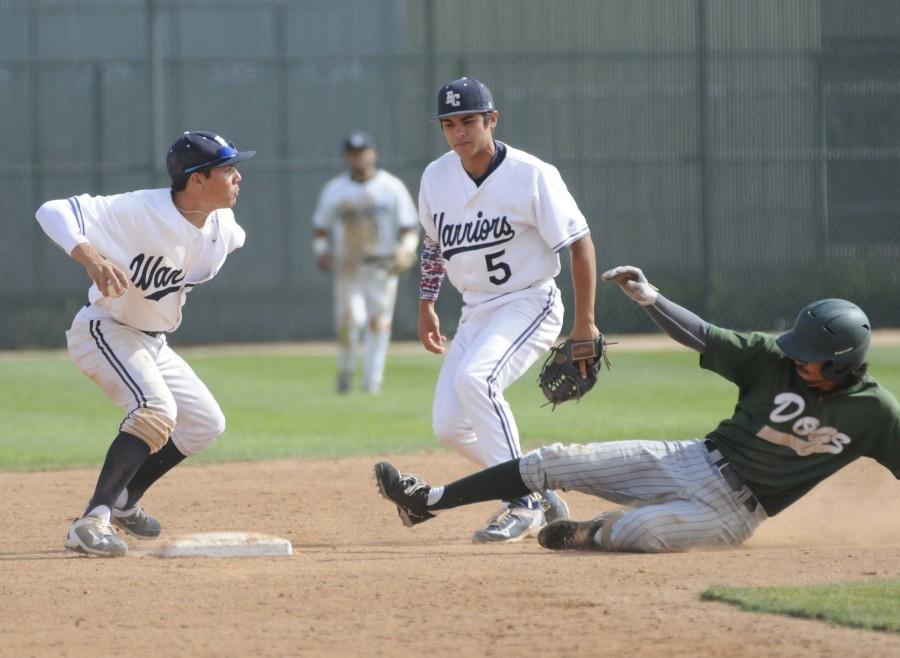 Warriors infielder Fred Smith gets an East Los Angeles player out at second base in the bottom of the fourth inning. El Camino defeated the Huskies 10-4 on Tuesday afternoon. Photo credit: John Fordiani

Freshman right-fielder Jonathan Pasillas took off from second base the instant freshman first baseman Jake Sahagian made contact with the ball.

He rounded third and made it home as the ball landed in left field.

The Warriors baseball team hosted the East Los Angeles Huskies on Tuesday in the first game of the final series of the regular season, and defeated them 10-4.

EC followed up the RBI double with an RBI single by sophomore short stop Fred Smith that brought in Sahagian for the score. The Warriors earned one final run in the bottom of the first inning when sophomore catcher Joey Notch ripped a ball to right-center field for a double that also brought in Smith for the early 3-1 lead.

Sophomore second baseman Joseph Cortez thought that the first inning was really the turning point in the game and got his team in the right mindset.

“They’re not really fighting for anything,” Cortez said, “but we’re still battling to make it into playoffs.”

After a scoreless second inning, the Huskies had a solid third inning. They earned three runs and took a 4-3 lead over the Warriors, the biggest inning for the Huskies.

Warriors’ assistant coach Jeff Miera said one of the main things his team needs to work on is preventing these kinds of defensive innings.

“[We need to work] on limiting those really big innings,” Miera said, “and just having no mental mistakes.”

EC followed up the Huskies’ strong third inning with a powerful bottom of the fourth inning with six runs scored, which gave them a big five-run lead over East L.A. The first was earned when second baseman Cortez doubled to center field that brought in freshman third baseman Ricardo Serrano and catcher Notch for two RBIs.

The Warriors earned two more runs on a throwing error to first base that brought in second baseman Cortez and sophomore left-fielder Alex Turner. They earned another run when first baseman Sahagian hit a single that brought in right-fielder Pasillas.

EC earned one final run in the inning when short stop Smith was able to reach first base on an error by the Huskies’ second baseman that brought in first baseman Sahagian.

Left-fielder Alex Turner felt the fourth inning was the real turning point in the game that helped his team to relax a bit.

“[The fourth inning] really put a little cushion on it for us,” Turner said.

After three more scoreless innings, the Warriors were able to earn one final run in the game in the bottom of the eighth inning. Second baseman Cortez singled to left field which brought in right-fielder Serrano and put the final nail in the coffin for the 10-4 victory.

Miera said that his team’s offense was really on point all day against the Huskies.

“Our offense really stepped up,” Miera said. “10 runs is really something to be proud of.”

The Warriors had an impressive day at both the plate and on the mound, earning 11 hits against the Huskies and sophomore Dalton Erb throwing an impressive eight innings before being relieved by sophomore Josh Norwood in the final inning.

Erb had a rough start, conceding five hits and three hits in just the first three innings, but as the game progressed, he started to readjust and threw stronger on the mound, throwing seven strikeouts out of 11 after the third inning.

Miera felt that the turning point in the game came “when Erb settled down and really got into a groove.”

The Warriors improved their record on Tuesday to 22-12, and their conference record to 10-9, which keeps them in a close run for a spot in the playoffs.

Miera said that his team needs “to concentrate on Thursday’s game and get the win” if his team hopes to make it into the playoffs.

EC travels to East Los Angeles on Thursday, April 23 to play the second game in the series.