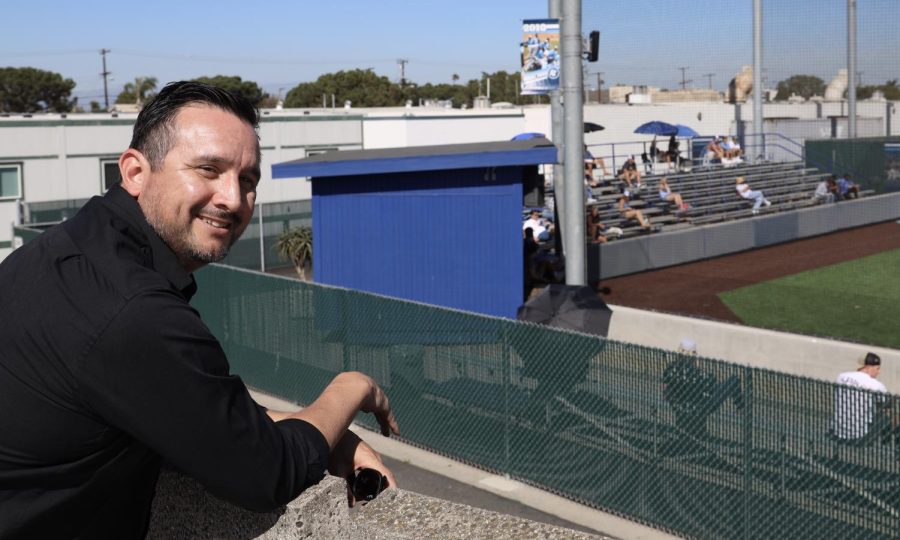 Beto Duran attends a baseball game between the El Camino College Warriors and the Harbor College Seahawks at ECC's Warrior Field on March 22, 2022. Beto, who attended ECC, is an ESPN reporter based in Los Angeles. (Greg Fontanilla | Warrior Life)

It is easy to tune into your favorite sports team and watch your favorite players. However, there are those, such as Beto Duran, who would much rather broadcast games.

With regular appearances on major athletic networks including SportsCenter, ESPNews, and First Take, Beto, 44, has earned a reputation as the expert on all things involving Los Angeles sports. He covers top sports teams, including the L.A. Lakers and L.A. Chargers, as a sports broadcaster.

Beto Duran was not always aware that he would be covering major sports teams. Before graduation in 1996, Beto enjoyed his time as sports editor of The Trailblazer newspaper at Carson High School, but he had not considered pursuing a career as a sports journalist. Instead, he covered his school’s athletics in order to get free admission to games.

“It got me into the football games for free,” Beto says. “I would write the stories of this football team and basketball team. But it was just cool to do and it was easy.”

Following high school, Beto, like many students entering college, still had no notion of what career he wanted to pursue. Deciding to follow in the footsteps of his siblings, some of whom attended El Camino College, Beto decided that it was a wise move to also attend El Camino.

“I came to El Camino because it was cool because my siblings came here. I’m number five of seven. And all of us went to [junior college] because it was a smart financial choice,” Beto says. “I didn’t want to come here. I wanted to go to a university, but when I graduated, my brother asked me what I wanted to major in and I said ‘I don’t know.’”

However, Beto knew for a long time that his intention was to be a part of the sporting world. It is because of this fact that Beto explored many avenues when it came to searching for a career path. Going from sports medicine classes to law classes ultimately landed Beto in a journalism class.

With no idea of a career path in mind at the time, Beto gained motivation from former ECC journalism professor Lori Medigovich.

“There was no example for me showing me I could do this,” Beto says. “This was the late 90s, so there were no Latinos on TV on English TV. It wasn’t that I needed it. But how am I going to go about being a reporter? That’s a job and it’s like how do you find that job? I don’t know anybody that does those jobs.”

In his early years, Beto saw many of his curiosities become interests. However, he saw those interests come and go. But it was one particular course that grasped his attention.

A Friday morning class with Lori, an adviser for The Union, saw Beto’s interest. The only problem was that Beto says he was a “terrible student” who showed up to class yet never completed the work.

“I loved the class so much that I never missed a class. But I also didn’t do the work so I’m pretty sure I failed the class,” Beto says.

Beto did not always shine in many aspects of his academic years, however, one thing remained true. Journalism had grasped his attention.

“I took chemistry and failed it. I took a biology class and failed it. I was a terrible student because I wasn’t interested in them. I was smart and I was curious, but I lost interest quickly. It wasn’t until I took a journalism class that the light bulb went on and I thought it was cool,” Beto says.

Due to having a natural attraction to sports, sports journalism ultimately captured Beto’s undivided attention.

Despite frequently appearing on major networks and podcasts, Beto has made an effort to reach out to community college students and offer them the opportunity to learn from his experiences.

Inviting Beto to speak to multiple classes in hopes of motivating the students in the same way Lori motivated Beto, Gary Metzker, a journalism professor at Long Beach State University, had nothing but high praises for him.

“I asked him [Beto] if he would come and speak to my sports journalism at Long Beach State,” Gary says. “And from there he embarrassed the shit out of all of the students because they weren’t doing anything.”

Daniel H. Birman, a professor of Professional Practice at the University of Southern California who specializes in teaching students documentary as a journalistic pursuit, sees the complexities of students interested in pursuing a career in journalism.

It’s difficult enough to break into journalism. Beto, on the other hand, takes it upon himself to offer guidance to those who are prepared to listen.

“I want to inspire the next generation of journalists,” Beto says. “I go to these conventions to give the real talk about the stuff you are not going to learn in class. The classroom information is very, very important, but I give the real-world talk of what I’ve dealt with in my 20 years in business.”

Individuals in sports broadcasting must be able to venture outside of their comfort zones. Beto hopes to share his experience with students who want to follow in his footsteps in this class. In this profession, curiosity is indeed important, he says.

Beto does a lot of things behind the scenes, in addition to visiting conventions and giving advice. Beto wishes for many of his peers to achieve success in the same way that he did.

Rahshaun Haylock, a KTLA 5 sports reporter who has worked with Beto since spring 2007 and covers the L.A. Sparks as a play-by-play announcer, recounts occasions in their working relationship when Beto reminded Rahshaun of himself striving toward the same goal.

“The first time I met him I just thought he was someone like me, just trying to come up in the business. It wasn’t until after that I first met him that I realized that he was doing some work for ESPN Radio and I realized there were more similarities between us,” Rahshaun says.

Even when working with Beto for the first time, it seemed normal for him to offer assistance to his fellow reporters. So much so, that when one of his peers struggled to form coherent sentences in front of the camera, Beto would do what he always does and offer assistance.

“He was working at ESPN and I was at CBS KCAL as a production assistant. And we were at a Clipper game and after the game, we attempted to shoot a stand-up,” Rahshaun says. “It was inside of Staples Center and I was trying to shoot this stand up and the words would not come out. I was so nervous. Beto was there and after about maybe three or four takes he came from behind and pulled me to the side and tried to calm me down and gave me words of encouragement.”

Rahshaun says Beto is passionate about the next generation of journalism students, especially those where Beto grew up.

“He’s taken me along with him to a couple of different high schools. However, he doesn’t sugarcoat anything. He’s going to give it to you raw and tell you exactly what it is that you’re getting yourself into,” Rahshaun says.

After years of hard effort, Beto says he is now able to enjoy the moment, which is something Rahshaun cherishes with his friend.

“Both of us coming up and we’re able to attend and work a lot of Laker games and so, just our post-game festivities after those games, whether back at one of our houses or at the J.W. (Marriott) on New Year’s Eve night after a Lakers game,” Rahshaun says.

While Beto may now reflect fondly on a 20-year career in sports broadcasting, he is now focused on not just continuing his stellar profession, but also inspiring the next generation of journalists in the same manner that many have done for him.

“I’ve been blessed to do this business for 20 years and I’ve gotten so many great opportunities to make great experiences ‘cause I’ve had great mentors to show me the way. If I inspire you to chase your dream, whether it be a doctor or lawyer or whatever you want to be you know, that’s great. That way people who come from Carson or who come from a junior college can also say they chased their dream and they got to experience that,” Beto says.