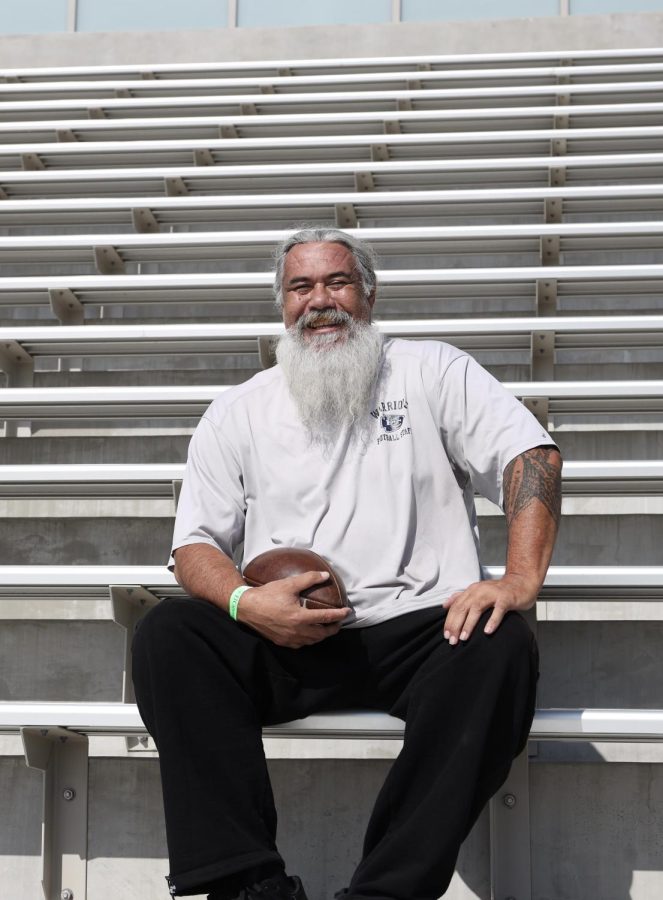 El Camino football coach Kenneth Talanoa sits in the stands at Featherstone Field at the El Camino College campus in Torrance on Monday, May 16. Talanoa will be entering his 21st season as the defensive line coach. He has been a part of Warrior football not only as a coach, but also played for the late John Featherstone in the early 90s. Additionally, he was inducted into the El Camino football Hall of Fame and named to the 1990s All-Decade team. (Greg Fontanilla | Warrior Life)

If you’ve ever read Linda Ellis’ poem The Dash, you may recognize the poem’s theme of living your life to the fullest. Ellis uses the dash to signify the bridge between life and death. When someone looks at a tombstone, they often see the birth and death date of that person. In fact, what people don’t pay attention to is the dash in between those dates. However, life isn’t always sunshine and rainbows. Human beings are guaranteed to be challenged in life, which may not be pleasant. It is about what you do during the dark times in your life, and how you respond to it. Some people lead themselves down the wrong road. Some of them choose to learn from those dark days and emerge from the shadows with newfound knowledge, experience, and wisdom to inspire others in a positive way. The dash signifies the life of that person, and how they lived it.

Within the El Camino College Warriors football program, there is a man on the coaching staff who focuses on living life to the fullest and inspiring young men in a positive way, and has been doing so for 20-years. Coach exemplifies the dash. At an imposing 6 feet, 5 inches, his physique may be seen as intimidating. However, he is anything but intimidating. Hiding within his 6-foot-5 inch frame is a warm-hearted man with nothing but good intentions, who comes equipped with life experience.

His name is Kenneth Talanoa, or better known as Ken or K.T., who will be heading into his 21st season in the fall as the defensive line coach. An alumnus of El Camino, Ken also played for the Warriors on the defensive line under the legendary coach John Featherstone during the 1991 and ’92 seasons.

In 2014, Ken was inducted into the El Camino College Hall of Fame. Additionally, he is also part of El Camino’s 1990’s All-Decade team that includes Steve Sarkisian, who played quarterback, and went on to coach football collegiately, and in the NFL.

At El Segundo High School, Ken was a star defensive end, and signed a letter of intent to play football at University of Hawaii. He later moved back to California, and played for the Warriors of El Camino. After his playing days at El Camino, Ken played at Arizona State on a scholarship, and then professionally for nine seasons in the Arena Football League for the San Jose Sabercats, Arizona Rattlers, and New York Dragons. Additionally, he spent three seasons in the NFL for the Denver Broncos, and the then-Washington Redskins, now the Washington Commanders.

During his professional playing days in the off-season, he would workout at El Camino to lift weights. Ken attended El Camino practices to pass on knowledge he obtained at the professional level to the players who were playing for Coach Featherstone at the time. His coaching career launched at El Camino after coming back to bring knowledge to his roots.

If there is anyone Ken has looked up to over the years and molded his coaching style after, it’s John Featherstone. Featherstone or better known as “Feather,” was Ken’s coach in the early ‘90s, and was well-known for conveying positive lifelong messages that transcended the game of football and instilled self-improvement in his players, on and off the field.

The late Coach Featherstone was not the only man in Ken’s life who played a crucial role. His father was also influential in his upbringing. His father, Aiulu Talanoa was a police officer, and a Vietnam War veteran, serving in the Army as a paratrooper in 173rd Airborne Brigade.

In June 1991, Ken and his family attended a barbecue at his grandfather’s house to celebrate the signing of his brother’s professional baseball contract. What seemed to be a joyous celebration, ended in tragedy. Aiulu had been sitting on a chair on the porch when he died from a brain aneurysm. Ken’s brother administered CPR when their father was discovered outside the front door, but the attempt was unsuccessful. Aiulu Talanoa was 47-years old. At the time of his father’s passing, Ken was starting out at the University of Hawaii as a student-athlete to play football.

Ken’s father provided his son with advice that has been useful for the coach in his life and in his job.

“Adapt, improvise, and overcome. Whether it be in sports or your children. We’re tough people. You will get through this if you stick to the course and believe in yourself,” Ken said about his father. “We never quit. I don’t know how to spell quit. Talanoa and quit don’t go in the same sentence.”

For Ken, football is more than just learning X’s and O’s. He returned to his roots at El Camino to not only coach the game he loves, but serve as a mentor to, and make a lifelong impact on the young men that come into the football program in order to give back to the community, building a foundation the same way John Featherstone molded his team of young men for 31 years. In the game of football, he also makes sure that his team of young men prepare during the week by making the defense accountable, and staying in shape. In order to ensure success down the road, he preaches the message of his players staying proactive by obtaining an education, taking part in team activities, and be part of the community.

Ken’s love of the game of football has kept him at El Camino, heading into his 21st year, and continues to inspire the student-athletes in the football program.

Since his playing days at El Camino, Ken has been the embodiment of a Warrior both on the football field as a player, and on the sideline as a coach. Of Samoan descent, Ken was born into the Polynesian culture with ancestry and history of fearsome and brave warriors, a cultural value that he continues to uphold on and off the field.

“Me being a Polynesian, I understand the concept of planting more trees because I can’t eat all the fruit. We have to grow trees for the future,” Ken said about developing success for his players and for future generations.

He also understands that windows of opportunity will close if his team of young men do not take advantage of opportunities presented to them. The longtime coach is also aware some of the young men he comes across on a yearly basis don’t take the necessary steps to grow into successful human beings.

“Some players don’t want that. Instead, they want instant gratification. Players want it right now but don’t want to go through the process or take the time. If you start something, you have to finish no matter what the outcome is,” Ken says.

Growing up, Ken took after his parents and grandparents, who worked very hard. In his youth, Ken and his brothers also followed in their footsteps, staying physically active, and taking action to achieve a task or goal.

“Everything is technology-based nowadays. A lot of these guys are always on their phones and don’t want to do to the physical activity that are required to get things done. I’ve been at El Camino long enough to know that,” Ken says.

On the other hand, he recognizes players who understand the process of achieving a goal, take the time to go through the process in order to be successful, which is what he preaches on and off the field.

Gifford Lindheim, who succeeded John Featherstone as head coach of the Warrior football program, has been with the team since 2016. Ken has continued to work as an assistant coach in the Lindheim-era.

“Coach Talanoa is a legend at El Camino. He played here, went on to be successful at the 4 year level and professionally. As long as I can remember, he has been a fixture of the staff and the community. It’s a testament to not only the coach he is, but also the man he is,” Coach Lindheim says of Ken.

He describes Ken as passionate in all areas of life: in coaching, his family, the El Camino football program, and passion for the community, adding that he has been a pillar of success at El Camino, and an embodiment of a Warrior.

Ken’s life outside of football includes spending quality time at family functions. Among his family members, there is another Talanoa who was a standout athlete for El Camino.

Like Featherstone and his father before him, Ken continues to offer lifelong lessons and advice to his players on and off the football field.

“I’m just trying to give back to the players, because that’s how I was raised by my family and by coach John Featherstone,” Ken said. “If it wasn’t for him, none of this would be possible. He is the reason I am where I am today.”

Jonte Williams contributed to this story