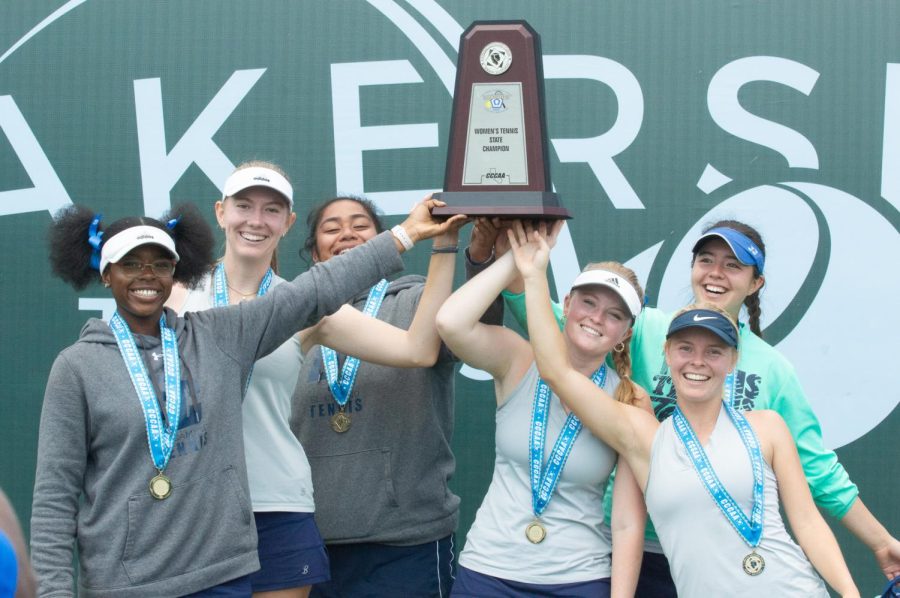 The El Camino College Warriors Women's Tennis Team celebrate winning the CCCAA Women's Tennis State Championship after beating the Cañada College Colts at Bakersfield Racquet Club in Bakersfield, California, on Saturday, April 23. This championship win marks the first for the history of the program between men's and women's tennis. (Naoki Gima | The Union)

The El Camino College women’s tennis team won the CCCAA 2022 State Championship for the first time in the program’s history, defeating the Cañada College Colts with a score of 5-1 overall on Saturday, April 23 at the Bakersfield Racquet Club.

This State Championship win capped off a season where the Warriors did not lose a single game in the regular season, finishing with a 12-0 undefeated streak and sweeping through the playoffs.

The Warriors won two out of the three doubles matches on Saturday. The number one doubles pair of Julia Jones and Kekoa Vaefa beat the Colts doubles team of Zuzia Dziewięcka and Josie Thompson with a score of 8-3. The number two pair of Kayla Brown and Danay Holman beat the Colts number two pair of Michaela Llewelyn and Lauren Denenberg with a score of 8-2.

The Warriors won three singles matches to cap off the overall win against the Colts. No. 4 player Kayla Brown beat the Colts Lauren Denenberg with scores of 6-1 and 6-4. No. 5 player Stefanie Liebich beat the Colts Corinne Mehring with two consecutive 6-0 sets.

Brown expressed the importance this win was for her and the impact that her team has had on her life.

“This win means so much… I’m just so blessed and honored to have just an amazing team, amazing coach, coach Darin the assistant coach, our girls are just so amazing and talented,” Brown said. “Growing up, you have teams and everything, but to have a team that turned into not just a team but it’s also a sisterhood, it’s really an amazing thing.”

No. 2 player Kekoa Vaefa sealed the win for the Warriors, beating the Colts Michaela Llewelyn with scores of 6-4 and 6-2.

Vaefa told The Union how her mother’s death in January has impacted her approach to the season and her growing appreciation for her team.

“I lost my mom in January, so playing throughout the season was really tough because she is usually there in the stands, so today was something I would hope that would make her proud,” Vaefa said. “It meant a lot [to win]. My teammates have been absolutely amazing, from being really great players to being really supportive friends, this was a season, definitely, that was meant for us.”

The Warriors’ Assistant Coach Dunn praised his team’s dedication and camaraderie throughout the season.

“…For me, all the credit goes to [The Warriors] and what they’ve been able to do this year is something remarkable that we haven’t been able to do before. I’m very excited and very happy for them,” Dunn said.