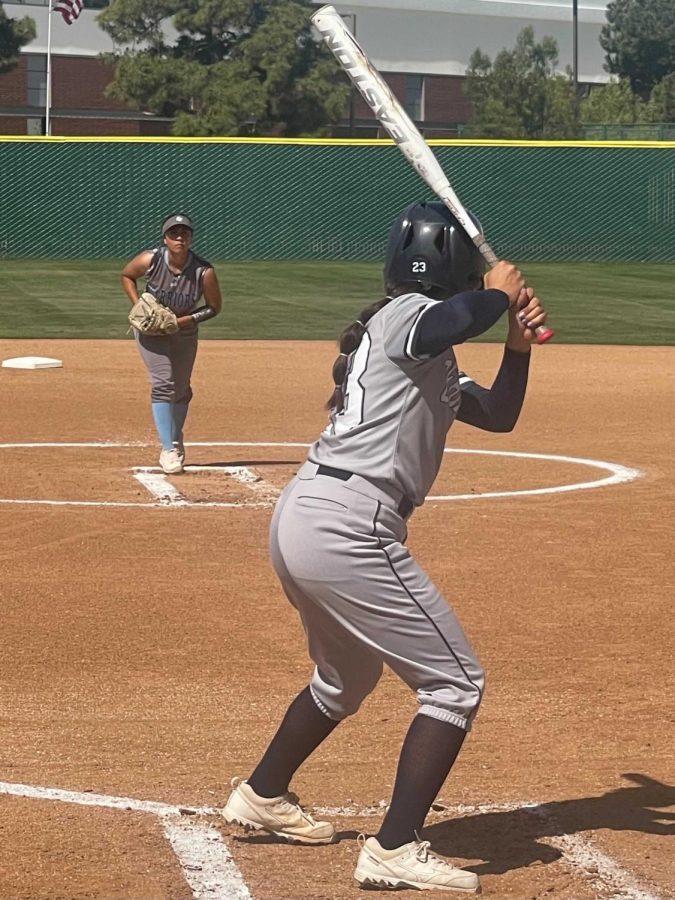 Alyssa Sotelo, the 2nd Baseman at Cerritos College, was focusing on her swing to hit a pitch and score a major point in the game. Throughout the game, Sotelo averaged 4 AB’s and kept a steady momentum along with her teammates throughout the entire game. (Khalid Muhsin | The Union)

Liz Cortez, a pitcher for the Warriors, focused on pulling through for her team throughout the entire game. Cortez faced 30 batters and threw 109 pitches with 64 of them being strikes.

“One of my weaknesses I definitely improved on in this game was hitting my spots, getting my pitches to hit what I needed them to do so that the hitters could hit where I wanted them to,” Cortez said.

During Cortez’ time as pitcher, one run was able to go into the second inning.

Although El Camino continued to show effort offensively in trying to score, in the end, that one point meant defeat for the Warriors, with the final score staying 1-0.

After winning the game, Kodee Murray, coach of the Cerritos College softball team, says there is room for improvement.

“I think we went for some bad pitches today, but we will work on things we messed up on,” Murray told The Union.

There were a total of 27 at-bats throughout the entire game from the Falcon’s 10 hitters.

The Warriors had fewer at-bats, with 24 coming from nine hitters.

Leah Madden and Kayla Inzunza were the main base runners of the game, stealing second base during the second and third inning.

With bases loaded in the seventh inning, Genise Chavez was the last hitter of the day, hitting the ball to shortstop, however, the Falcons were able to get the ball and get the third out, ending the game.

El Camino’s softball coach Jessica Rapoza coached her players to focus on their skills to get on base and create chaos on the bases.

“I always like to make them conquer something very hard, whether it’s a spring team drill, a running drill of some sort and little mundane detailed activities so when they’re tired they have to focus more,” Rapoza said.

The Warriors are back in action against Mt. San Antonio College on Tuesday, April 12.