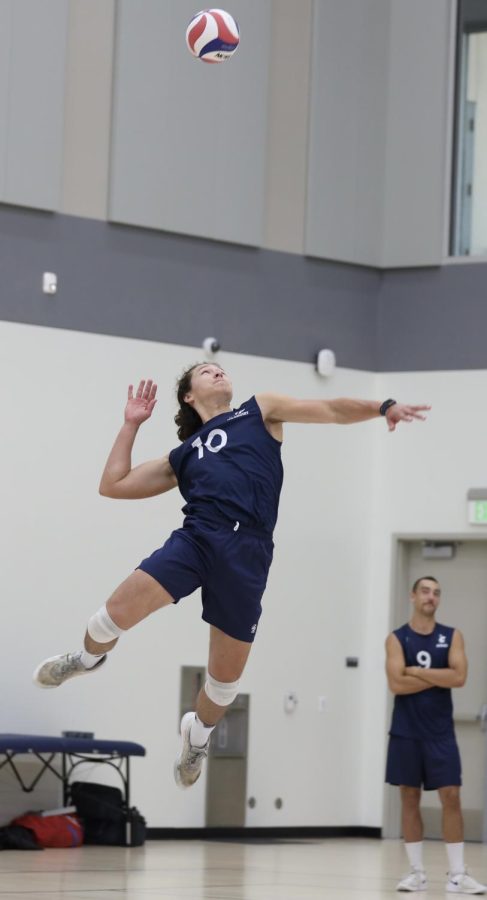 Freshman Andrew White serves the ball during the third set against L.A. Pierce College at the El Camino gymnasium on Friday, April 1. The Warriors defeated L.A. Pierce 3-0 (25-14, 25-6, 25-20). El Camino will be on the road on Wednesday, April 6 to face Long Beach City College for a conference matchup. (Greg Fontanilla | The Union)

The El Camino Warriors took control of the game, with L.A. Pierce trying to respond in the third set. Freshman Andrew White, a 6’3 outside hitter, led El Camino with 12 “kills”, adding four aces for the night, according to the El Camino College athletics website.

“The goal was to keep the ball in, and I was happy I did not make any hitting errors. I wanted to do well enough to get the rest of the team in, and I did just that,” White said.

With the win over L.A. Pierce, the Warriors are now on a nine game winning streak.

“We just have to keep doing what we’ve been doing, don’t lose focus, and we should be alright. We have a legit chance at a state title,” White said.

Coach Richard “Dick” Blount was pleased with the performance of his team, saying that the Warriors defeated a team that has a long-standing history with each other.

“They were great to beat because this was a payback game for the times we have lost to them over the years,” Blount said.

Blount was pleased with the win, however, he was not pleased with some of his players in what happened before warm-ups started.

“I was not happy with some of our guys arriving late, but they played well,” Blount said.

The Warriors will be on the road on Wednesday, April 6, to face Long Beach City College in a Western State conference showdown.