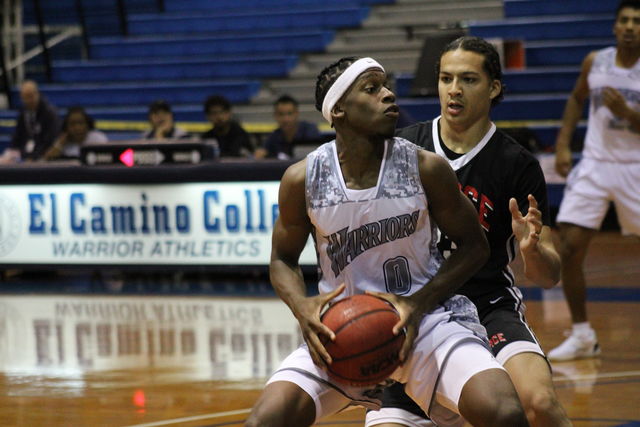 Women’s basketball team guard Taylor Hart was named the conference Co-Freshman of the year after fellow guard Ashley Nguyen won it last year making it back-to-back seasons the award has belonged to a Warrior.

“I was just ready to be prepared for whatever came my way,” Hart said. “My confidence throughout the season [grew] at the start I was timid and my mindset wasn’t right and I think just [got stronger] continuing to play.

Hart started in 23 of ECC’s 27 games and averaged 11 points, six rebounds and two assists while shooting 35 percent from the field.

“Her strength [is] being someone who can score,” Warriors coach Steve Shaw said. “[She] can put the ball on the floor, create for herself and the ability that not many people have anymore is [the] mid-range game.”

Hart’s confidence grew as the season progressed and her ability to score amongst other areas of her game allowed her numbers to increase in conference play.

She improved to 12.4 points, 6.5 rebounds, shooting 41.6 percent while adding nine points to her three-point percentage.

“[Creating for others, three-point shooting and overall ability to score] are all tough factors and when you [have a player with all] three of those together, its going to be hard to able guard [them],” Shaw said.

“I try to make plays for everyone [but] coming into this season I had to step up,” Nguyen said. “I feel like my shooting was a lot better than last season [and] my defense was [better].”

Nguyen followed up her standout freshman season averaging 13 points, four rebounds and five assists while shooting 42 percent from the field and 35 percent from three-point line.

“It was harder for Ashley [because] teams aren’t going to let her to let your top players be the ones to beat you,” Shaw said. “So for her to have [the season she did] when teams are more aware and more determined not to allow her to [be as successful] is a credit to her development.”

Nguyen had the chance to play with her twin sister, Sara, this season and their ability to play off each other was fun to experience at the college level, Nguyen said.

“At the college level it was a little bit more intense but she was able to be more aggressive which she likes to do,” Nguyen said.

Mason played a number of different roles for The Warriors last season but her role expanded this year getting more opportunities and turned into one of the reliable leaders of the team, Shaw said.

“It’s not a guarantee that somebody will go from a role spot as a freshman to a key spot their sophomore year and elevate their game to that level but she did and put up solid numbers all year especially in scoring,” Shaw said.

Mason started in every game for The Warriors after not starting a single game last season and up’d her points per game total by seven.

“Your second season is not as easy just because you’re a sophomore,” Mason said. “I missed a whole summer playing with [the team] so I didn’t know how everything was going to be.”

She averaged 11 points and eight rebounds while having the highest field goal percentage on team at 47 percent.

“Being more aggressive and more confident when I’m shooting, just more confidence in my [overall] game helped me,” Mason said.

Nguyen and Mason have plans on continuing to play at the next level and hopefully at the same school together at San Fransisco State University.

“Obviously getting the opportunity to play with Lex [Mason] again is fun and we play really well together,” Nguyen said.

Warriors guard JaMal Howard was the lone representative from the men’s basketball team in all conference honors.

“This is my first time making first-team in anything since I started playing high school so it really meant a lot to me this year,” Howard said. “My brother made first team and I never made it so I knew I had to catch up to him that was one of my driving factors for the season.”

Howard wanted to establish himself as a leader and lead by example this season and he started in 27 games after starting in only 12 last year.

“I didn’t want any doubts in people’s minds on who I was as a leader,” Howard said. “My main goal was to come in first place so everybody knew that when I talk to them it was coming out of a respect.”

“[The team] finding me and getting me the ball in opportunities where I was open shows a lot to them, skillwise and IQ of knowing the game [because] I couldn’t do anything without them,” Howard said.

Howard said he plans to continue to play at the next level and is currently in the process of what school he wants to attend to next.

“I do have two showcases coming up that I plan to get eyes [on me] and [get] in contact with,” Howard said.

Hoffsmith started in 25 games as a freshman and averaged 6.5 points and four rebounds per game.

“[Didn’t expect] her work ethic and how much she improved over the course of the season but her ability to shoot the ball from the perimeter was key for us,” Shaw said.

Ambriz suffered a season-ending achilles injury last season and did not return until December but still a huge impact and the team was better with her, Shaw said.

“[For] someone who didn’t put up a ton of points or maybe even a lot of rebounds she was really good for us on the defensive end and definitely made us a better team,” Shaw said.