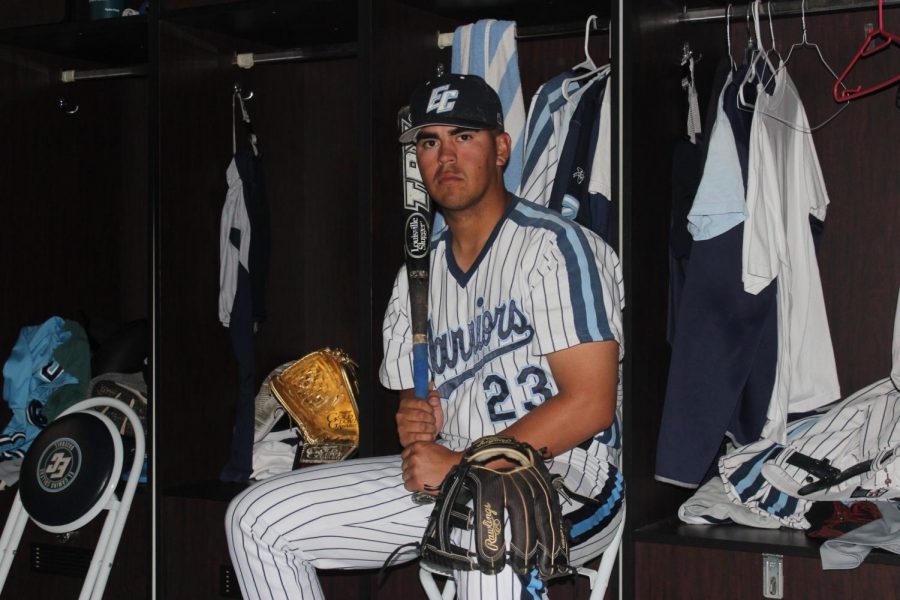 The alarm clock rings at 5 a.m. signaling it is time to wake up and get the day started. He puts on an El Camino College baseball t-shirt and shorts before loading his baseball bag and school backpack into his silver Chevy Colorado.

After a month of 6 a.m. conditioning workouts and driving to school in dark blue skies, he is ready to get back into the swing of being a student-athlete.

Standing at 6-foot 1-inch and 225 pounds, Diego Alarcon, 20, undecided major, is a baseball student-athlete at ECC.

He began playing baseball when he was 3 years old. Having two older brothers involved in the sport made it all the easier choice to start playing.

Warriors head coach Nate Fernley said he knew he was getting a freshman who was a solid defender with great hands, a nice swing and a great baseball IQ in Alarcon.

“We knew we were getting a player that can make an impact right away and he did by winning a gold glove at second base for us,” Fernley said.

Alarcon resides in Lennox but was born in Long Beach and attended Robert A. Millikan High School.

He enrolled at El Camino College for the 2017-2018 school year after electing to leave Golden West College after one semester.

Growing up Alarcon played a number of different sports including soccer and basketball but baseball became his favorite because of the enjoyment he had in training and competing in games.

“You don’t have to be the most talented but you could most definitely be the most hard working and many athletes around [ECC] share that characteristic,” Alarcon said.

After having numerous Division-2 and other community college baseball offers during his senior year of high school, Alarcon’s desire to play for a Division-1 baseball program drove his decision to stay home and attend the local ECC.

“The biggest goal [for me] is moving on to a D1 school and continuing to play baseball for as long as I can,” Alarcon said. “The biggest thing for myself is being able to be the first to graduate from a university in my family and [I’d] love to use baseball to achieve that.”

Alarcon is coming off a knee injury that kept him out the whole 2019 season after having one of the more memorable freshman seasons in recent memories.

“Just to show you the kind of impact he had, a team [intentionally] walked Diego to face [Warriors Spencer Palmer] the leading hitter in conference and [best] offensive hitter Fernley said. “Just shows the amount respect teams had for him as a freshman.”

He was involved in 26 double plays while committing five errors in 212 chances and one error in 101 chances in conference.

“[When pitching] it’s always [great] to have that gold glove [defender behind you],” Warriors pitcher and designated hitter Aaron Orozco said. “I just trust him whenever a ball is hit and I know he’s going to make the play.”

Warriors freshman infielder Benny Casillas said he heard a lot about Alarcon due to his huge freshman season.

“Coming in I didn’t know what to expect but he’s provided so much for the offense,” Casillas said. “He’s been our best hitter so far, a great leader and as a fellow infielder; one of the guys I look up to.”

As a freshman, Alarcon played in all 47 games for ECC as he posted a .328 batting average totaling 67 hits including 13 doubles, five home runs, 37 runs batted in (RBI) and 46 runs scored.

“That guy’s a beast,” Orozco said. “He’s been picking up our team whenever our team’s been down.”

All this success came to a halt in 2019 when Alarcon decided to sit the year out to make sure he could get as healthy as he could.

He strained his right knee going after a ball in the 2018 playoffs and took a bad step that resulted in the injury.

Although surgery wasn’t needed, rest was a big option and sitting out became an opportunity to grow and learn more about himself.

During the time he was away from baseball, Alarcon took up a job at Beach Cities Baseball Academy in El Segundo as a coach to help youth baseball players improve their skills and educate them about the game.

“Working with kids and their baseball development while I was away really made me into a better baseball player and even better person,” Alarcon said. “My drive for the game [has grown] being around [the kids] and my co-workers that played professional and college baseball.”

Players like Ken Woods who was drafted by the San Francisco Giants in 1992 MLB Draft and Alberto Concepcion who originally was selected in the second round of the 1999 MLB draft by the San Diego Padres out of El Segundo High School are just a few of Alarcon’s inspirations at his job.

“These are all baseball freaks and guys I could just pick their brains about baseball and wouldn’t mind me doing so,” Alarcon said.

Their dedication to wanting to always help Alarcon expand his baseball knowledge and work on his bat-to-ball skills have given him more confidence to trust in his ability.

“They’re always working to get me better from hitting with me late hours after very long days at work, to just sitting down and talking about their careers,” Alarcon said. “That’s one of the reasons [why] I decided to come back.”

When he was eleven years old, Alarcon began playing for Team Phenom, a travel ball team that was composed of players from all over the nation that came together to play in tournaments across the United States.

“It was a great experience [and] something that I will always be grateful for,” Alarcon said. “One of the best groups of guys both on and off the field that I’ve ever been around to this day.”

From 2012-2014 Team Phenom was consistently in the talks of being a top five travel team in the nation. Prior, Alarcon said he was playing on a travel team in San Diego when a teammate was joining and asked if he’d like to be a part of it.

“I played with so many great athletes and watched a lot of my teammates and friends develop into D1 athletes,” Alarcon said. “I knew that there was improvement for me to be done and I have yet to reach my potential but I can definitely feel myself on track [to be a Division-1 athlete].”

The hardest obstacle Alarcon faced coming back from his injury was trying to get back into baseball shape while balancing everything else in life.

“Balancing out your schedule is tough but once you realize that this is only temporary you get through it,” Alarcon said.

The next step for the Warriors is completing the unfinished business prior teams left behind and capturing the state championship.

“We owe to it [coach] Fernley to get him what he deserves and doing it for the teams and players that left their blood and sweat for the [ECC] baseball program” Alarcon said. “I really do believe we have the team to do it [because] a lot of young guys are hungry and ready to go.”

Editor’s Note: A spelling error was corrected in a picture’s caption at 6 a.m. on Wednesday, May 20.