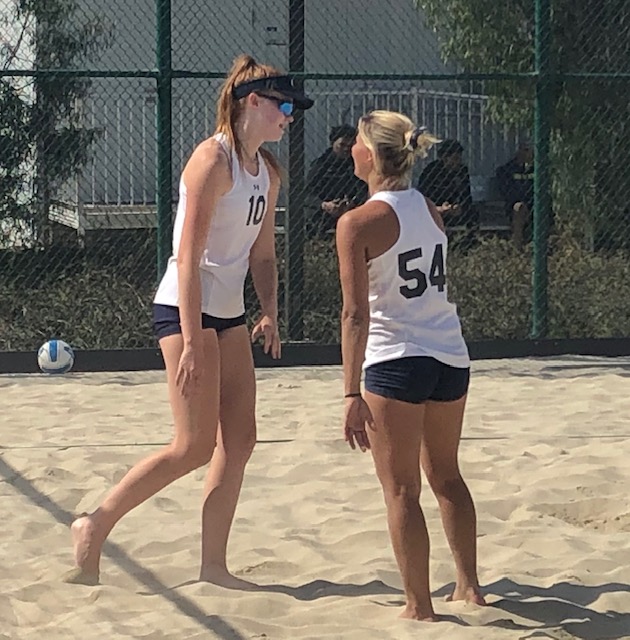 ECC lost only one set to RCC but Warriors’ Caitlin Donatucci and Kylee Glickman defeated RCC’s Sadie Arganda and Robyn Collier in the third set 15-10.

RCC head coach Elizabeth Younglove said the team needs to improve on understanding the game of beach volleyball and how different it is in contrast with regular volleyball: in beach volleyball players only have one teammate on the court rather than having five teammates.

The Warriors dominated Cypress College from start to finish, beginning with ECC duo Brooke Drahos and Giulia Alessandri who won both sets of the first meeting by more than 12 points.

“Brooke and I work really well together because we talk to each other a lot on the court which is a good thing,” Alessandri said. “Since we are really great friends it helps and we can improve on making the other team run more.”

Drahos said she was pumped to have played so well but serving and on-court communication are areas she can improve in.

Although San Diego Mesa College only had one set win to show for it, they gave ECC the toughest match of the day.

“As a whole we played kind of okay but ended up running out of gas at the end and [ECC] is the wrong team to run out of gas against.” San Diego Mesa College head coach Kim Lester said. “[ECC] is a great team who played well and our shots hit the wrong places.”

The Warriors’ next game is at home on Wednesday, March 4 against Grossmont College at the ECC Sand Courts. First serve is set for noon.

“There is definitely things we can improve on and I feel that everybody [has] improved tremendously each week,” Warriors head coach Le Valley Pattison