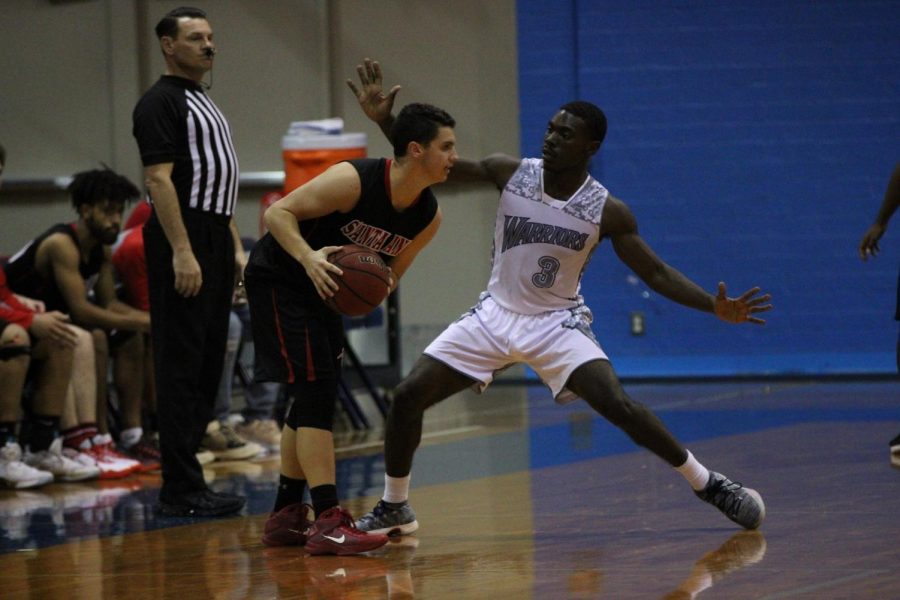 Cameron Jones, Warriors coach, said the team was “juiced” and “fired up” to play in the new gym.

The Rustlers led the Warriors in a back-and-forth first half, 42-41 that included three ties and six lead changes.

Rustlers guard Caleb Gerber scored all 10 of his points in the first half on 4-for-9 shooting from the field. ECC was led by Darrian Williams-Youngblood led with 10 points and had 5 rebounds, 2 steals, and 3 blocks.

“Darrian [Williams-Youngblood] was great on defense with 6 blocks, a couple of steals and deflections that got us great shots in transition,” Jones said.

Williams-Youngblood ended the game leading the Warriors in scoring, rebounds, and blocks with 17 points, 10 rebounds, and 6 blocks.

“I had good timing on the blocks, I try to protect the rim as best as I can even though I’m not a conventional big man,” Williams-Youngblood said. “I do my best to contribute on both ends of the court.”

After taking the lead, ECC became stagnant on the offensive end as The Rustlers outscored the Warriors 15-6 over an 11-minute span with 4:45 remaining to regain the lead at 64-63. The Warriors went cold shooting 3-for-18 from the field with nine turnovers.

“We had pretty good defense tonight,” Warriors coach Robert Uphoff said. “We just need to put the ball into the basket more [and] hopefully by getting out in transition and running [we can do that],” Uphoff said.

Rustlers guard Ricky Briseno came off the bench and led the team in scoring with 22 points shooting 8-for-13 from the field, 5-for-6 from three-point land. Rustlers center Eric Watson nabbed 16 rebound while scoring four points and blocking three shots.

“We let [Briseno] go crazy, he hit some key shots to get them back into it and he made a lot of threes,” Uphoff said. “He was a good spark off the bench for [Golden West]. He wasn’t on their official roster so we didn’t know how to guard him.”

The Warriors tied the game at 69 with 1:23 left but two costly turnovers allowed the Rustlers to capitalize and win the game 75-71.

“We had some key errors on offense and defense,” Jones said. “We gave up some big buckets late and turned the ball over.”

The Warriors host Santiago Canyon College on Wednesday, Dec. 11, in the ECC Gym Complex at 5 p.m.

“We got out and ran, which lead to maybe our season-high in scoring. We need to continue to rebound and run with it,” Uphoff said. “We need to work on [three-point shooting] because you won’t win many games shooting [4-for-23],” Uphoff said.