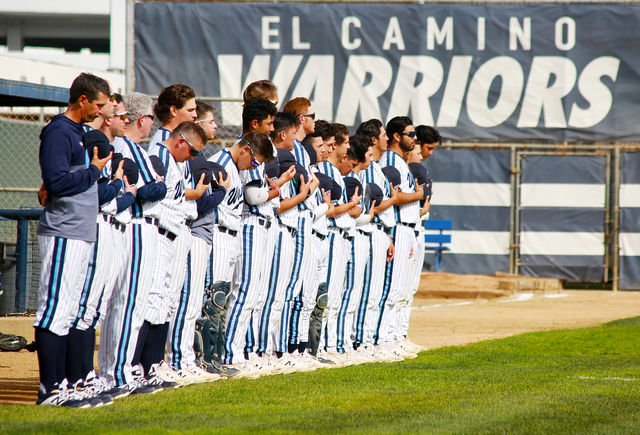 The El Camino College baseball team is coming off a 2019 season in which it won the most games of any other California community college as they fell one game short of the state championship.

The Warriors were led by a pitching staff that features their two returning aces. Starting pitchers Jimmy Galicia and Aaron Orozco were named 2020 preseason All-Americans on Monday, Oct. 21.

“We have experienced players with Aaron [Orozco] and Jimmy [Galicia] getting us through game by game,” Warriors’ infielder Diego Alarcon said. “Coach [Nate] Fernley makes sure we do the little things rights.”

ECC finished atop the South Coast Conference (SCC) and was the only team in California to mount the 40 win plateau and won a conference-best 17 games during conference play.

Galicia and Orozco found themselves among conference leaders in several individual pitching statistical categories. Galicia was No. 1 in the SCC in ERA (1.92), wins (13) and third in strikeouts (83).

“We have a deeper staff, more guys who can go deep into games and keep the lead for the team,” Orozco said. “We have the pieces to win, we just have to play as a team and build team chemistry like we did last year.”

Orozco was the only pitcher in the conference to surpass 100 strikeouts, finishing with 114. He was second in ERA (2.10) and wins (12) while finishing sixth in runs batted in, RBI, (36) being a designated hitter.

Orozco and Galicia have raved about new pitcher Julian Aguiar. He’s talented, throws hard and believe he will play a huge role on the team this season.

“This team has a lot of young guys so we have a chance to be special on the mound,” Warriors’ coach Grant Palmer said.

The goal for the team every year is to win the conference and win the championship but the team has to “take it one day at a time,” Palmer said.

Second baseman and pitcher Spencer Long, who led the team in saves, has transferred to San Jose State University.

“I don’t think it is going to matter which guys we lost,” Warriors’ infielder and pitcher Julian Diaz said. “We know we will win a lot of ballgames because of our pitching and defense.”

Diaz appeared in the most games (15 appearances) among all returning pitchers on staff besides Galicia and Orozco.

“I can improve my all around game by just staying patient and not letting the big moment get to me,” Diaz said. “On the mound, I just got to keep throwing strikes and keep the ball down.”

“After being gone for a while, I have had to focus on my timing and rhythm to get back to where I was,” Alarcon said. “Anyone on the team is as good as the next guy.”

Alarcon won a gold glove at second base in 2018, being the first player in ECC baseball program history, even though he was playing out of position and filling a need for the team.

“[Moving to third base is] nothing too different for me,” Alarcon said. “We have a great team, you can’t focus on any one guy because we have a deep roster.”