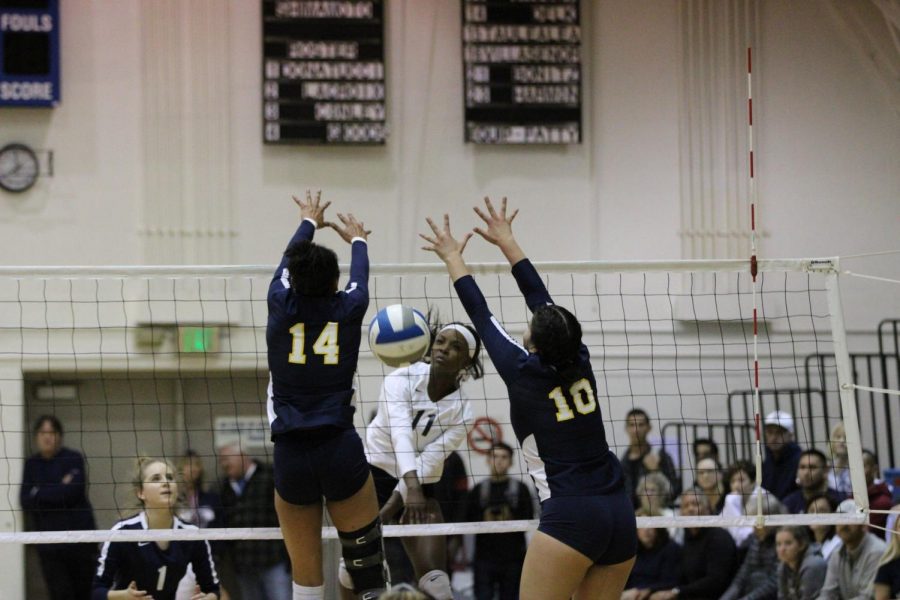 El Camino College women's volleyball outside hitter Mikayla Clark spikes the ball against the Fullerton College defense during the third set of their match on Tuesday, Nov. 26 in ECC's South Gym. The Warriors came back after losing the first two sets to advance in the regional playoffs. Jaime Solis/The Union

The El Camino College women’s volleyball team bounced back to win three straight sets to beat Fullerton College on Tuesday, Nov. 26 and advance to the next round of the California Community College Athletic Association SoCal Regional playoffs.

The Warriors will play against Moorpark College on Saturday, Nov. 30, at 6 p.m. in the ECC South Gym. ECC lost 3-1 to Moorpark during their previous match on Wednesday, Sept. 4.

Fullerton College came out strong after winning the two sets as Hornets outside hitter Saylor Frew had 16 kills and 12 digs.

“We need to clean up our game,” Warriors’ setter Caitlin Donatucci said. “[By] improving our skills like passing, hitting, setting, and serving.”

The Warriors flipped the switch with hopes of another state championship as they came back to win three sets in a row. Warriors’ outside hitter Mikayla Clark led the Warriors with 28 kills and 12 digs.

Donatucci added 56 assists to her season total as she is 92 assists away to tying the total assists in a single-season by an ECC player.