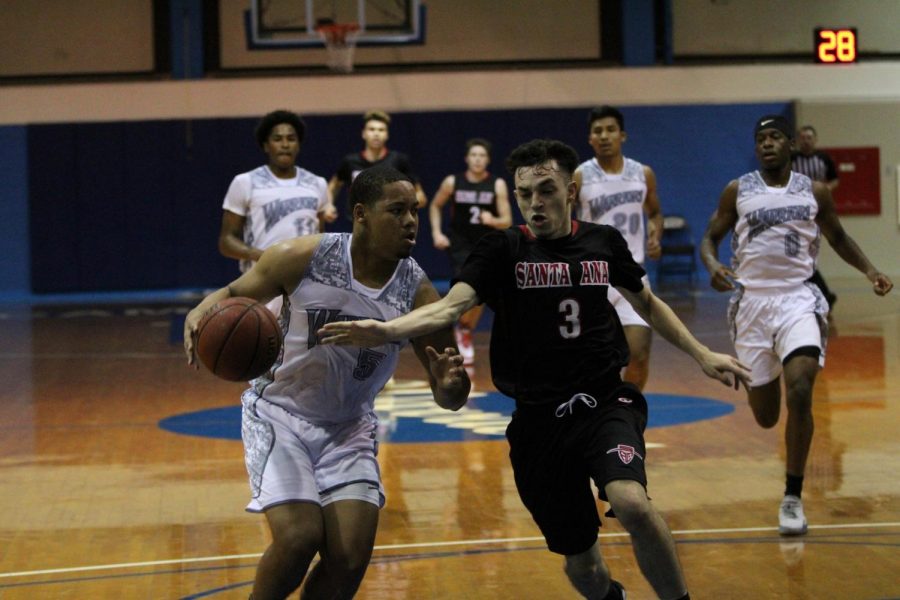 “We had some guys late to our film session,” Warriors’ coach Robert Uphoff said. “We run a pretty disciplined ship, so we started the first five guys that showed up to film.”

Santa Ana College guard Ramon Lopez had a game-high 25 points on 7-of-14 shooting from the field. Dons’ forward Jalani Horn notched his second double-double of the season with 17 points and 14 rebounds as he added three steals and two blocks.

After the slow start to the game offensively, Warriors’ guard Jason Vasquez had his first 20 point game of the season to lead the team in scoring off the bench. ECC guard Corey Madison also came off the bench with 10 points and eight rebounds.

“I saw our team was down, so I wanted to give us a little boost whether that was on defense or getting to the free throw line on offense,” Vasquez said. “That kind of helped my team going into halftime.”

The first half ended with the Dons leading 45-33.

ECC guard Rashon Crutcher came out of half-time aggressive attacking the basket and getting to the free throw line. He finished he game with 13 points and six rebounds

“Knowing that I didn’t play the first half, I had time to evaluate the opponent,” Crutcher said. “I knew I had to be aggressive and I knew I could get to my spots.”

The team will be traveling north to participate in the Porterville Classic this weekend hoping to come back with their first two wins of the season. ECC opens the tournament against Porterville College on Friday, Nov. 22, at 7 p.m. and play West Hills Lemoore on Saturday, Nov. 23, at 3 p.m.

“These are definitely winnable games,” Crutcher said. “This is also an opportunity for us to build some team chemistry, spend a little time together and get to know each other.”