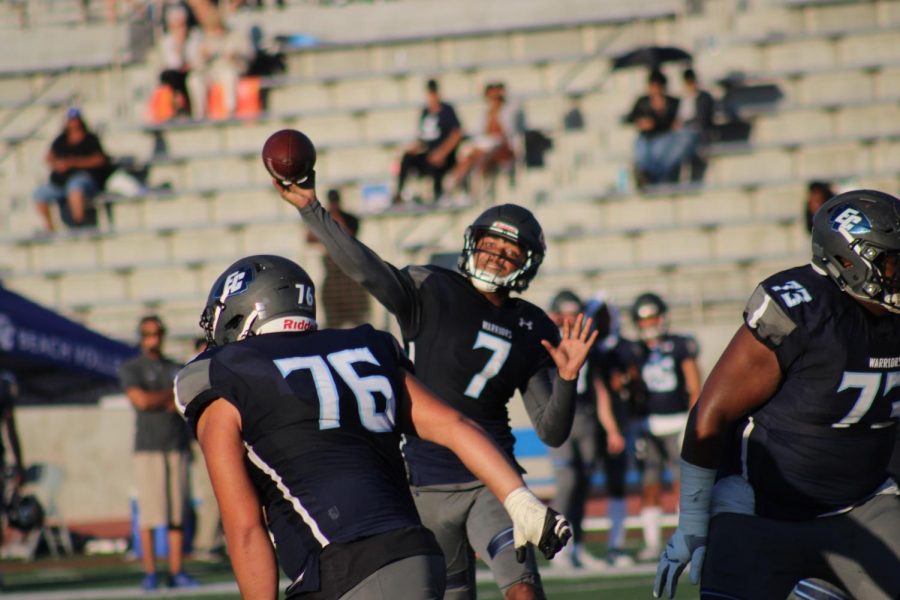 El Camino College football quarterback Jerman Gatoy attempts to deliver a pass to a wide receiver in the fourth quarter of the game against Cerritos College on Saturday, Nov. 16 at Murdock Stadium. Gotoy finished the game with 359 passing yards and three touchdowns while running for 20 yards and a touchdown. Jaime Solis/The Union

With previous generations of Warriors football players and coaches in attendance on Saturday for the pregame ceremony honoring legendary El Camino College football coach John Featherstone, the stage was set for ECC to close out its regular season at the inaugural game played on Featherstone Field.

It was an offensive showdown between the Warriors and the Cerritos College Falcons in a game where the winner would be taking home the Milk Can trophy.

ECC earned the trophy in last season’s meeting with a late-game touchdown but could not repeat this time as their comeback effort fell short to give the Falcons the Milk Can with a 42-40 victory.

“It was a hard-fought game,” Warriors coach Gifford Lindheim said. “Just wish we could’ve won, simple as that.”

ECC will travel to San Diego Mesa College to play them in the Patriotic Bowl on Saturday, Nov. 23 at 6 p.m.

The scoring was back and forth throughout the game entering the fourth quarter with the Falcons leading 35-27.

After catching a touchdown to open up the game, Warriors running back Raymond Graham found the endzone again on the first drive of the fourth quarter with a two-yard touchdown to close Cerritos’ lead to 35-33.

The Warriors tried to tie the game with a trick play for the two-point conversion but could not find an open receiver and the offense was unable to convert.

The Falcons answered back on the ensuing kickoff with 97-yard return from Jacobi Hardy to give Cerritos a 42-33 lead.

ECC continued to fight back with a big defensive stop to set up its offense for an eight-yard touchdown pass from Gotoy to Dion Moore that cut Cerritos’ lead to 42-40 with 3:07 remaining in the game.

The Warriors defense followed that score up with a huge drive holding the Falcons to a fourth down. However, Cerritos had one last trick in its bag for the Warriors defense as they converted a fake punt for a first down to help secure the victory.

“It was good battle,” Cerritos coach Dean Grosfeld said. “Those two teams are always going to do that and we’ve always done that and El Camino never gave up.”

Gotoy finished with a game-high 359 passing yards and three touchdowns while running for 20 yards and one touchdown.

“I feel like I could’ve done better [at my position],” Gotoy said. “My team played good out there but I feel I could’ve been better. I missed a couple of plays that could’ve helped the team.”

Cerrito’s quarterback TJ McMahon finished with 263 passing yards and three touchdowns in the game. Jovohn Tucker led all Falcons receivers with 83 receiving yards while Carl Odom led rushing with a game-high 16 attempts for 60 yards and one touchdown.