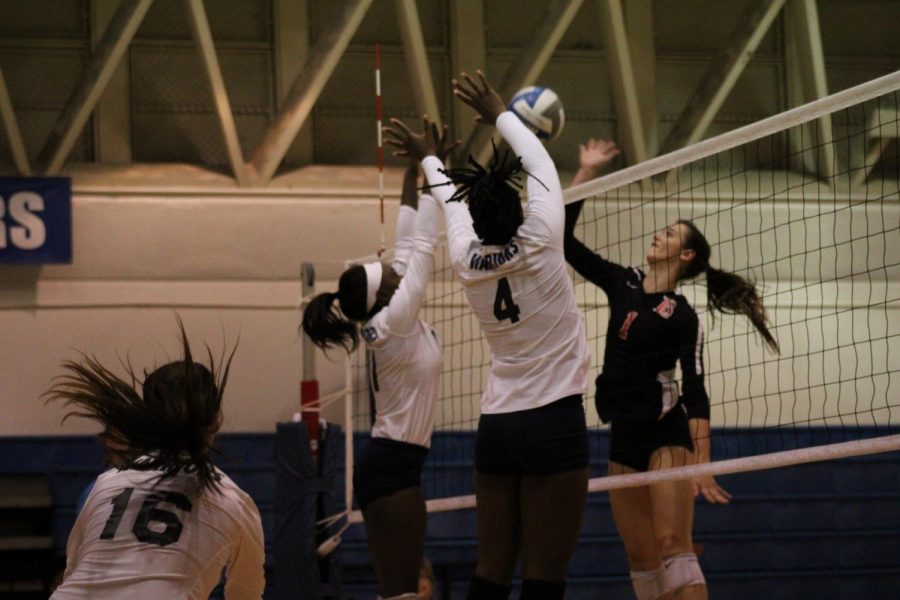 El Camino College women's volleyball middle blocker Ginia Goods, No. 4, and outside hitter Mikayla Clark, No. 11, block a spike attempt from Long Beach City College opposite hitter Alanna Shields during the match against LBCC on Friday, Nov. 8, in ECC's South Gym. The Warriors will play against LBCC for the South Coast Conference Championship on Tuesday, Nov. 19 at 7 p.m. at LBCC Hall of Champions gym. Jaime Solis/The Union

The SCC championship game will consist of No.1 seed ECC vs. No. 2 seed LBCC who won its last matchup between the two schools.

“We have played [LBCC] tough both times we kind of need everyone firing on both cylinders,” Warriors coach Liz Hazell said. “We need to pass well and serve tough to put their great hitters out of system but mostly we got to take care of the ball on our side.”

During their sweep of Rio Hondo College on Thursday, Nov. 14, the Warriors won all three sets despite struggling early in the first.

Warriors outside hitter Mikayla Clark had 19 kills and 12 digs for her 15th double-double of the season. Warriors middle blocker Ginia Goods was second on the team with 8 kills.

Caitlin Donatucci had 36 assists out of the teams 39 assists pushing her total past 1500 career assists as a Warrior.

The SCC championship game is on Tuesday, Nov. 19 at 7 p.m. at LBCC Hall of Champions Gymnasium as ECC plays LBCC for an automatic bid to the regional playoffs.