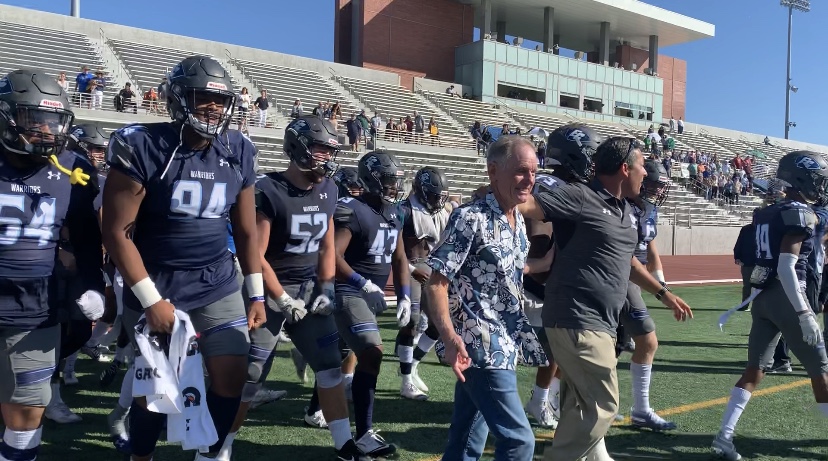 During the pre-game ceremony, Featherstone received a replica plaque that would solidify his legacy at ECC before winning the coin-toss for the Warriors.

“[He is] a true warrior and South Bay legend,” ECC President and Superintendent Dena Maloney said about Featherstone during her speech. “As much as he loves football, [his] passion for El Camino College goes beyond the gridiron whether on the field, in the classroom or in the community, coach Featherstone always encouraged our players to strive for excellence.”

Earlier this year, administration members voted on the change to honor Featherstone who is regarded as an icon in his field and catapulted the Warriors football team into national recognition when the team won the National Championship in 1987, a 2006 state championship, and 11 conference championships.

Featherstone was honored as Murdock Stadium’s athletic field was renamed Featherstone Field ahead of the Warriors Milk Can Trophy football game Saturday, Nov. 16.

“Well, you know,” Featherstone said about the event and the sport that he coached for 31 years. “It is a one by one. Football is simply a game that I love.”

Featherstone, or “Feather” as he is better known to those closest to him, retired in 2015 with a 31-year-career of coaching community college football at ECC.

“[Featherstone] has been one of the most historic coaches in California community college history,” Director of Athletics and Kinesiology, Colin Preston previously told The Union. “[He] will be remembered for generations to come when people come to Murdock Stadium and they see Featherstone Field.”

Former Warriors assistant coach Gene Engle, who worked alongside Featherstone during his own 35 year tenure at ECC, said walking his colleague and friend onto the field once more was a historical event for the college that once housed the great players of the 70s and 80s and the coach that helped inspire them.

“It’s a very special day,” Engle said. “Not just for the All Decade Teams of the 70s and 80s but also for the field being named after Featherstone. If anyone encapsulates the El Camino College Warrior spirit, it’s John Featherstone.”

Hector Murillo, who was the fullback during the 1987 National Championship game before transferring to Eastern Michigan University, said his success and scholarship was a result of the huge win under Featherstone.

“It was an amazing experience. Those pregame speeches by coach Featherstone really got us all really fired up,” Murillo recalled. “He was such a great motivator. His inspiration taught me discipline and how to be a team player. I’m forever grateful for everything he did for me.”

Murillo added that he felt elated to be back at ECC, seeing his Warriors teammates had not missed a beat as far as their camaraderie was concerned.

Upon arriving to Murdock Stadium’s entrance, visitors are now welcomed with a flashy new plaque that reads “Featherstone Field.”