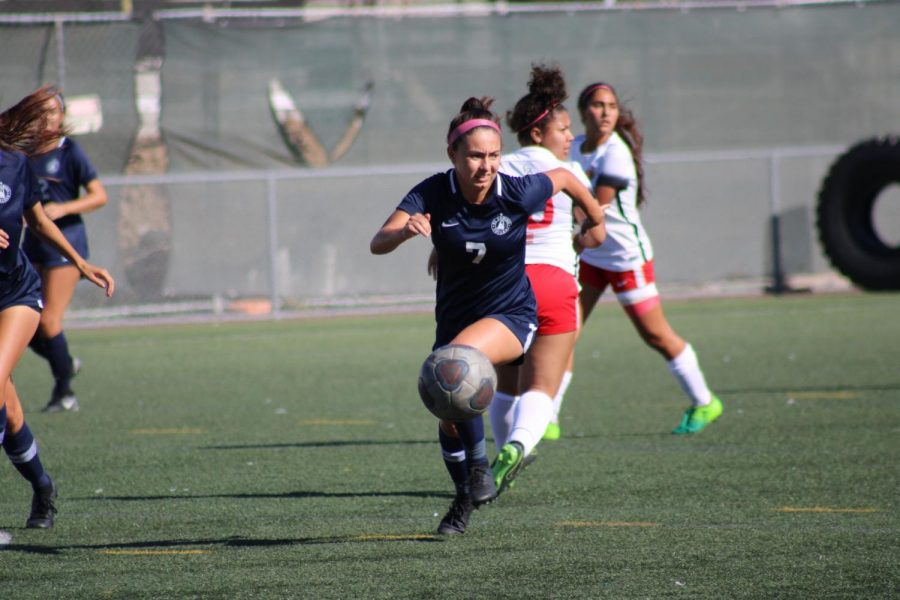 El Camino College midfielder Jennifer Villarruel sprints after the ball during the first half of a game against College of the Desert on Tuesday, Oct. 15. Villarruel was held without a goal against East Los Angeles College Friday, Oct. 18, at the PE and Athletics Field. Jaime Solis/The Union

Following a three-goal outburst against College of the Desert this past Tuesday, the El Camino College women’s soccer team hoped its new formation would bring the same results against East Los Angeles College (ELAC).

However, the Warriors were shutout 2-0 at home by the ELAC Huskies, losing its first South Coast Conference game of the season Friday, Oct. 18.

After ELAC sophomore forward Perla Navarro opened the scoring on a counter attack in the third minute, sharp defending and possession of the ball kept the Warriors’ deficit to one goal.

However, Huskies’ freshman midfielder Andrea Martinez’s late 84th minute shot from outside the box over Warriors’ goalkeeper Kelly Gallagher proved to be the decisive point of the match.

“It was a collaboration of everybody just working hard together [and] finishing opportunities, ” ELAC head coach Tessa Troglia said after the match.

“We stacked our preseason with nothing but [last season’s] top 10 [ranked] teams,” Troglia said. “I think we prepared to come out in the conference and have a good run.”

Dunn added that the Warriors offense was slow and was unable to move forward with some of its opportunities.

“It’s always going to be hard when you are doing that. You have to take those chances going forward,” Dunn said.

Warriors’ freshman forward Andrea Iniguez said the team’s lack of work ethic starts to show on the field when they’re not finishing their opportunities on goal.

“A lot of us don’t show up to practice and it’s showing in the games,” Iniguez said while aching from a cut in her lower leg that she suffered during the match. “We just need to work harder in the next games but I don’t know how that’s going to play out.”

After Friday’s loss, the Warriors are yet to win a home game this season, posting an 0-5-2 record.

“We have [been] very unlucky at times in some of our games. We deserve to get a little more offense from our team. We should be able to get more offense,” Dunn said. “I have to figure it out because we are not getting enough out of our players offensively.”

The Warriors’ lack of positive results in home games has not sat well with the team, Iniguez said.

“It’s taken a big toll [on the team],” Iniguez said after losing to ELAC. “All of us are really frustrated, not only with ourselves, but with each other and we just don’t know how to fix it.”

For a map of the Pasadena City College campus, click here.