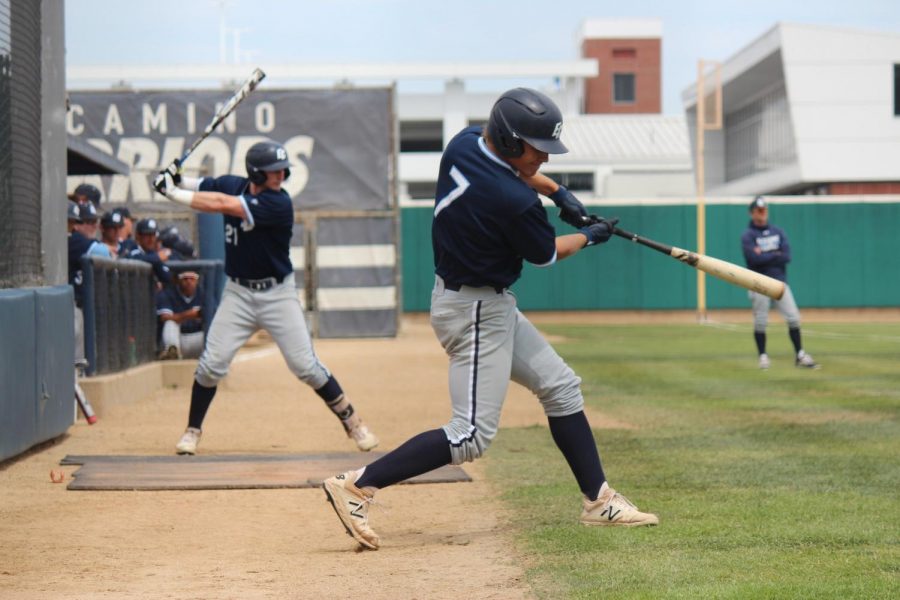 Warriors infielder and right-handed pitcher Spencer Long (front) and outfielder Ty Conrad (back) take practice swings before the beginning of the sixth inning of Game 2 against the Glendale Vaqueros on Saturday, May 18, at Warrior Field. The Warriors won the game, swept the series and will play in the final four of the 2019 California Community College Athletic Association State Championship. Photo credit: Devyn Smith

The El Camino Warriors baseball team is heading to Fresno to play in the 2019 California Community College Athletic Association State Championship after sweeping the Glendale Vaqueros in the Sectional round of the playoffs.

The Warriors will play the San Joaquin Delta Mustangs at noon on Saturday, May 25. The game will be at Fresno College.

Warriors coach Nick Jones said that moments like these are what the team plays for.

“This team is trying to win it all,” Jones said. “For the program, the ultimate goal is trying to get to the playoffs as many times as you can.”

Jones said that previous Warriors teams were better on offense, but this year’s team can play defense and get extra outs.

“We also get clutch hits when we need to,” Jones said. “Our pitching and defense are better, and that can get you far.”