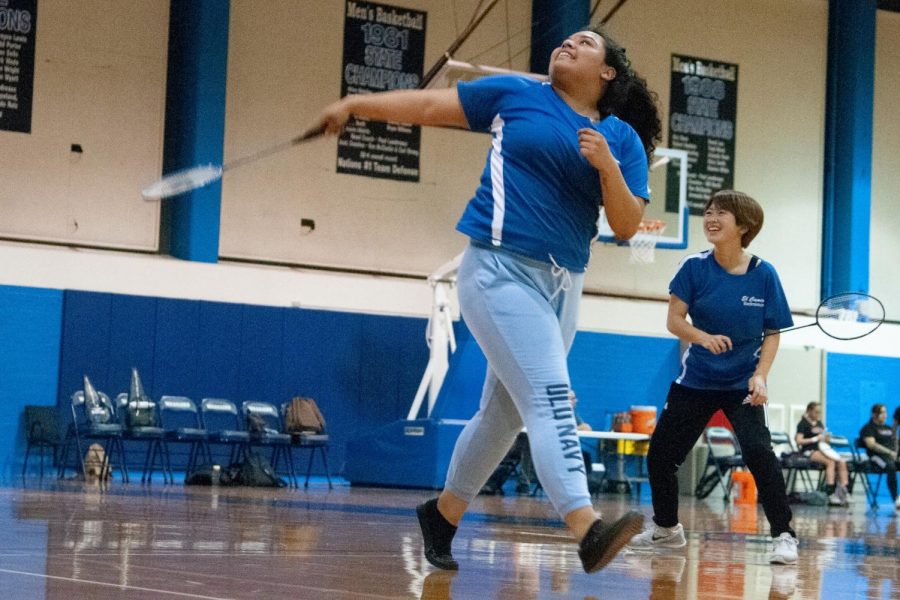 Warriors badminton players Angela Vargas-Gonzalez (front) and Miya Kawguchi (back) rally during a doubles match against Compton on Friday, March 15 at El Camino's North Gym. The energy in the building was light and relaxed, often with players making jokes with one another. Photo credit: Elena Perez

Before Friday, the Warriors played only two games on the season. Warriors coach John Britton talked about the roster makeup of this season’s badminton team.

“We got some girls this season who actually only have high school level experience in badminton,” Britton said. “We are expecting to [challenge for] second place and hopefully by the end of this season we will be good enough to be challenging Pasadena.”

The atmosphere in El Camino’s North Gym was calm with players from both teams laughing and exchanging jokes during the game.

The coaches of both teams talked with each other throughout the match.

“Playing against El Camino is funny. We are sisterschools and enjoy the games,” Tony Diaz, head coach of Compton College’s badminton team said.

The match went on for roughly two hours. Players on both teams were tired by the end, but effort from both sides was evident the entire time.

“We played really hard,” Lauren Ritter of the Warriors badminton team said. “We are a good team.”

The Warriors next game is Friday, March 22 at Pasadena City. It starts at 2 p.m.