Warriors grind out another victory 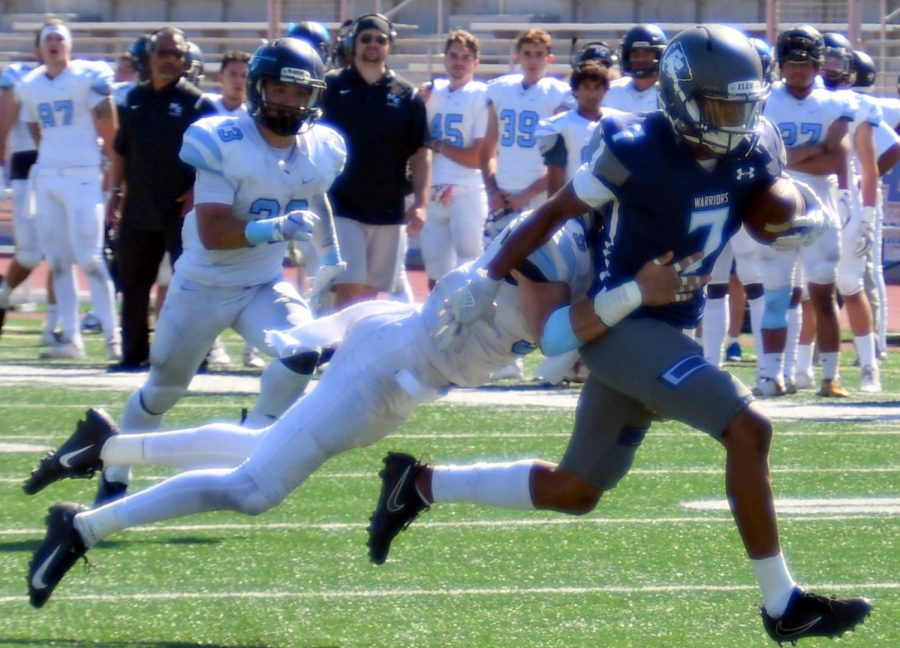 ECC wide receiver Aaron Magee (No.7) drags a Raiders defender on a 26-yard reception during the ECC vs. Moorpark College football game at Murdock Stadium on Saturday, Sept. 29, 2018. ECC won the game by the final score of 23-13. (Jack Kan/Union) Photo credit: Jack Kan

Defense was the name of the game for the El Camino College football team on Saturday, as the Warriors were able to grind out a 23-13 victory at home against the Moorpark College Raiders.

While the El Camino (3-2) offense struggled to move the ball in this game, the defense was stifling. They held Moorpark (1-4) to minus 10-yards rushing and the Raiders managed only 100-yards of offense for the entire game.

“We have instilled this mentality where as a defense, we expect (stops) every time,” sophomore linebacker Jaymin Austin said.

As good as the Warriors defense was, they started the game in a 3-0 hole because of a fumbled punt by sophomore wide receiver Kishawn Berry.

After a botched hand-off between freshman quarterback Grant Ferrauilo and freshman running back Kameron Denmark led to an easy Moorpark touchdown, El Camino was trailing 10-0.

“If you’re out there making plays on defense, and the offense turns the ball over, you get a little upset,” Austin said. “It gets us a little fired up to go out there and get stops.”

The Warriors defense, lead by freshman defensive lineman Justin Martz, would go on to sack the Raiders four times and only allow three more points the entire game.

Stopping Moorpark’s offense was only half the battle, as the Warriors were also tasked with putting up enough points to gut out a victory. That effort would be led by freshman quarterback Grant Ferrauilo.

Starting just his second game of the season, Ferrauilo completed 12-23 passes for 213-yards and a touchdown, and also caught a touchdown on a trick play that saw sophomore wide receiver Trevon Clark throw his second touchdown pass of the year.

While El Camino was at full strength with Ferrauilo and sophomore quarterback Aaron Thomas both available, the same cannot be said for the Raiders.

After both of Moorpark’s quarterbacks were knocked out of last weeks game with injuries, the Raiders were forced to start converted wide receiver Vinny Corso at quarterback.

“He’s only 5’8″, he can barely see over the offensive line,” Moorpark head coach Michael Stuart said. “Not to mention, he only had a week to get ready. It’s hard to find that rhythm.”

The Warriors would find a rhythm of their own as they headed into the second half. Trailing 13-0 and looking for a spark, the Warriors called 310-pound defensive lineman Jonah Tavai’s number.

In an unusual formation, Tavai received the snap in the shotgun and barreled his way in for a 2-yard score. After the trick play from Clark to Ferrauilo, early in the third quarter, the Warriors took the lead for good.

“We have put in a lot of effort in practice these last few weeks to get some wins and figure out how to be a great football team.” Martz said.

Great football teams can take care of business on both sides of the ball, however, and the Warriors have yet to put together the type of all around performance that their talent would suggest.

While acknowledging the great play from the defense, Lindheim saw room for improvement there as well.

“I think that we can still play better on defense, we have the talent to be dominant,” Lindheim said.

Despite the lackluster offensive performance from the Warriors, the team managed to get a big win in its quest towards a conference title.

After losing their first two games, the Warriors have now reeled off three straight wins heading into their bye week.

“It was very important to get on this 3-game winning streak as we head into our league games,” Ferrauilo said. “The offense did what we had to do to get the win, and that’s all that matters.”

The Warriors will get their next chance to extend the winning streak on Saturday, October 13, when they head out on the road to take on the San Diego Mesa Olympians (3-2). Kickoff is set for 6 p.m.

This story was corrected to state a players first-year status on, Sunday, Sept. 30 at 9:50 p.m.