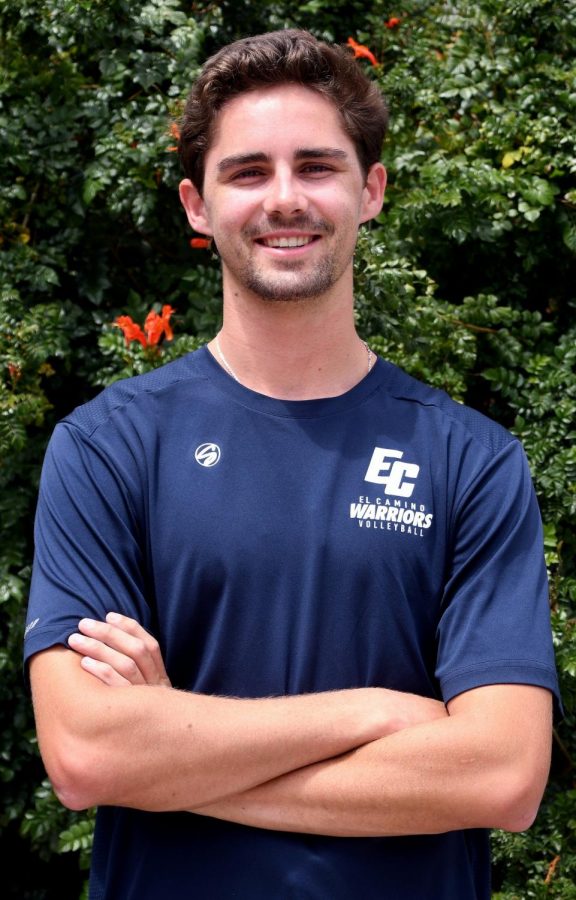 EC volleyball player Matt Donatucci saved a life of an older man while setting up for a volleyball tournament in Manhattan Beach, Saturday, May 12. Photo credit: Jack Kan

To some, he is a hero, on and off the volleyball court. And although it’s nice to hear, Matt says he still feels the same. He has no super powers, but he does have a set of tools that allowed him to assist in saving the life of 58-year old Jeff DeCoste.

It was an overcast Saturday morning on May 12, and Matt Donatucci, a 19-year-old, 6’5” volleyball player at El Camino, had been looking forward to playing in a volleyball tournament at Manhattan Beach.

Kurt Peters, ECC men’s volleyball assistant coach, was the director of the tournament and Matt, along with his friend and fellow teammate, Cameron Steen, expressed to their coach that they wanted to play. Kurt said that if the two showed up early and helped set up the courts, they could play in the tournament for free.

Matt and Cameron arrived early, before 7 a.m. and began setting up the courts.

“A guy in a wetsuit was yelling ‘lifeguard, lifeguard’,” Donatucci said. Matt looked around and could see that the lifeguards, north and south of him, were too far away.

“I just looked over and I saw a guy by the parking meters in the parking lot on Rosecrans, on the ground, and two guys are around him yelling…and so I just kind of like instantly knew, he needed CPR and help,” Donatucci said.

Matt threw his sunhat off and sprinted over to the parking lot. Cameron was right behind him.

“When I got there, (Jeff DeCoste’s) whole face was purple. He was on his back next to the railing and there was no life in his eyes,” Donatucci said.

Matt instinctively began compressions on DeCoste immediately. He knew he needed to get the blood pumping through his body and air into his lungs.

“I realized that after a minute into it, I could see his eyes had life in them and he was staring back at me while I was giving him compressions,” Donatucci said. Matt spoke to him and told him to “keep your mouth open.”

1:30 seconds into it, lifeguard Greg Crum arrived at the scene. He got out of his truck and jumped over the railing holding an automated external defibrillator, (AED device), along with a first aid kit. Crum instructed Matt, “keep going, you’re doing a great job.”

Moments later, Greg cut DeCoste’s shirt off, wiped his chest down and put the pads in place in preparation to shock him to help his heart reestablish a rhythm.

Greg pulled DeCoste away from the railing and cleared him for the shock. Matt continued with the compressions.

Once the paramedics arrived, Matt stepped away and allowed them to take over. The paramedics then placed a bag valve mask over Jeff DeCoste’s nose and mouth and began to administer air into him that way. They then placed him onto a stretcher, into their truck and transported him to the hospital.

“My reaction was to go with Matt and stand by if he needed any help,” Cameron Sheen said. “Coincidentally, I got CPR certified the week prior to the incident. I was calm though, because Matt knew what he was doing and had everything under control,” he said.

Matt was then interviewed by a cop that had arrived. The cop asked for details and a time frame. Matt also spoke to a lifeguard and gave his account to him as well.

“I just had no thoughts. I just sprinted over right when I saw him laying on the ground. I just knew what to do,” Donatucci said.

Matt is enrolled in Traci Granger’s first aid class at ECC this semester. He learned CPR early on and is now CPR and first aid certified. In his class they worked on dummies, practicing compressions over and over. Matt explained that the tools he learned in this class are the reason he knew what to do to save Jeff DeCoste’s life.

Jeff is now home and recuperating.

Obviously overcome with gratitude, Julie DeCoste sent an envelope to Matt. Inside was a poem. A part of the poem reads:

A hero is one who just does what he should

And is ready when opportunity should occur

Never flinching from an opportunity to do good

You are a true hero for sure.

“There wasn’t even a thought process. It was just straight awareness. I just saw (Jeff) on the ground, he looked dead, and I just knew that as long as I was pumping his heart, he could have a chance at coming back to life, so that’s what I did,” Donatucci said.

After Matt had helped save the life of Jeff DeCoste, he went on to play in the beach volleyball tournament and he and his teammates placed 3rd that day.