The art of boxing is an endless enjoyment for PE instructor 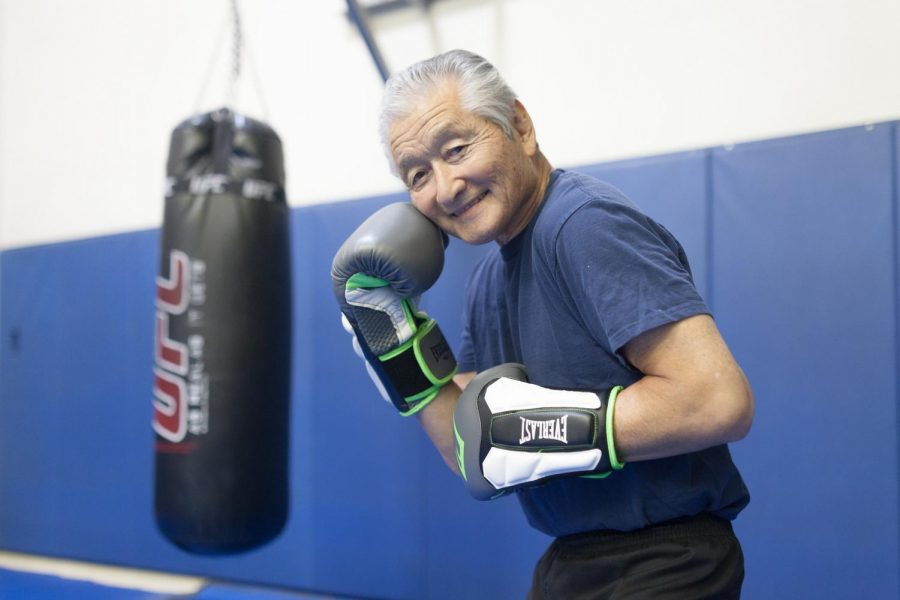 Mits Yamashita, 75, is a part-time boxing instructor, who first learned the art of jiu jitsu before becoming prolific in boxing training with the likes of Chuck Norris and Bruce Lee.

He walks across a blue wrestling mat, he has a curvy pushed forward posture, his wrists are pressed together behind his back.

His vision is focused on the safety of his student’s surroundings.

He continues to walk around the class making sure that all of his students are performing their techniques on others correctly. He watches each individual’s rhythm, stance, and every punch, he then stops in each sections to address the mistakes and advises them on.

Mits Yamashita is a 75-year-old part-time instructor at El Camino, he has been teaching boxing and self-defense courses at EC since 1965. His students and his passion to teach are what keeps him standing strong.

Yamashita teaches two classes every Monday and Wednesday. He begins his classes with warm ups, covers all the basics and procedures in boxing, learn how to move, go over punches, jab, cross, hook, and defenses in punching. Before practicing the techniques on others, he makes sure that his students are trained. In the eight week, his students are able to punch with a partner.

Yamashita’s journey at EC began when a former self-defense instructor, Vrig Crank, asked Yamashita if he could teach his class for one semester, since he got drafted into the army. Crank stayed in the army and Yamashita has been teaching at EC ever since.

Before learning and teaching boxing, Yamashita’s first martial arts was jiu-jitsu. Most of the people he was running up against were boxers. He realized that in order to perform and go against a boxer, he had to study the arts of boxing. At that time his instructor was Chuck Norris and he was getting into boxing and told everyone who was there to study boxing. Yamashita took his word on it.

“They were mentally very strong of what they wanted to do and the determination of what they were doing it persistence to get better and better,” Yamashita said. “It was just the impression I got that they were (going to) be very successful.”

Yamashita’s passion for the arts has earned him to receive four black belts in karate, Jit Jitsu, and in the art of Akihito. Yamashita has maintained his shaped well all these years because of his everyday training with his students. His students motivated him to train and work harder each day.

Through 52 years at EC, Yamashita has become aware of how students have lacked focus in his class today versus how it was in his early teaching years.

“(Students) seemed to be more focused in the 70s, 80s, (because) they didn’t have the gadgets that we have now,”Yamashita said. “So when they were in class they were focus on what they were doing.”

Yamashita liked hearing about how students back then took in an interest in being a police officer, doctor, or accountant and did it. He believes that in this time students tend to choose majors that are unsure if they want to pursue it. Yamashita likes to encourage them to be open minded, to try out other classes to find their interest . Also to take advantage of all the sources EC can provide for them to succeed.

Yamashita’s best teaching era is today’s because it has allowed him to grow and to stop worrying.

“Oh boy, I can honestly say it’s now, I am (much more free). I was really uptight when I was teaching in the early days because I was worried all the time about the students and if I was going to get fired. I come and I just have fun now,” Yamashita said.

Yamashita’s philosophy on life is to stop worrying, enjoy life and bring joy to all his students.

While teaching students the arts of boxing he likes to mentor them to believe in themselves. He enjoys being a part of their lives when he comes into work.

One of Yamashita’s best moments at EC was when he received an award for his recognition and excellence in teaching, seven years ago.

Many of Yamashita’s students admire and respect him as an instructor and his profession, along with his colleague.

“He has good styles and good defense,” Jonathan Ramiro, 22, P.E. teacher said. “He teaches really well and he’s the reason why we are good at boxing. He inspired me to box.”

Another students sees the potential in an instructor who wants to see others achieve.

“He has been teaching here for a long time and he just loves what he does. “he’s like this isn’t work for me, its the greatest job you can have. “I admire how committed he is to it,” Jonathan Moore, 18, administration of justice major, said.

A student enjoys the energy that Yamashita presents in class.

“He gives you words to pump you up, it’s not just a class it’s more like a motivating kinda class. “He’s very caring about what you’re doing. “He’s a guy to respect,” Luz Ortiz, 21, psychology major, said.

His colleague was also one of his students in the early years. He stills sees that his passion is the same.

“He has a continuity of purpose. He has a very strong caring personality with the students, He wants (students) to succeed and a lot of teachers don’t have that same passion,” Tom Hazell, professor of health sciences and athletics, said.

Yamashita advice to students who are interested in pursing a career in boxing they have to be dedicated and serious. It requires a lot of dedication, but to keep in mind to do it for fun and to enjoy the ride.

“In boxing if you’re in the middle of a fight you can’t give up and say I’ll come back to it tomorrow and finish, you can’t,” Yamashita said. “You have to set up a mindset that once you start fighting your goal is to win. The degree is your opponent, that’s striking at you and you have to defeat it. Don’t give up.”