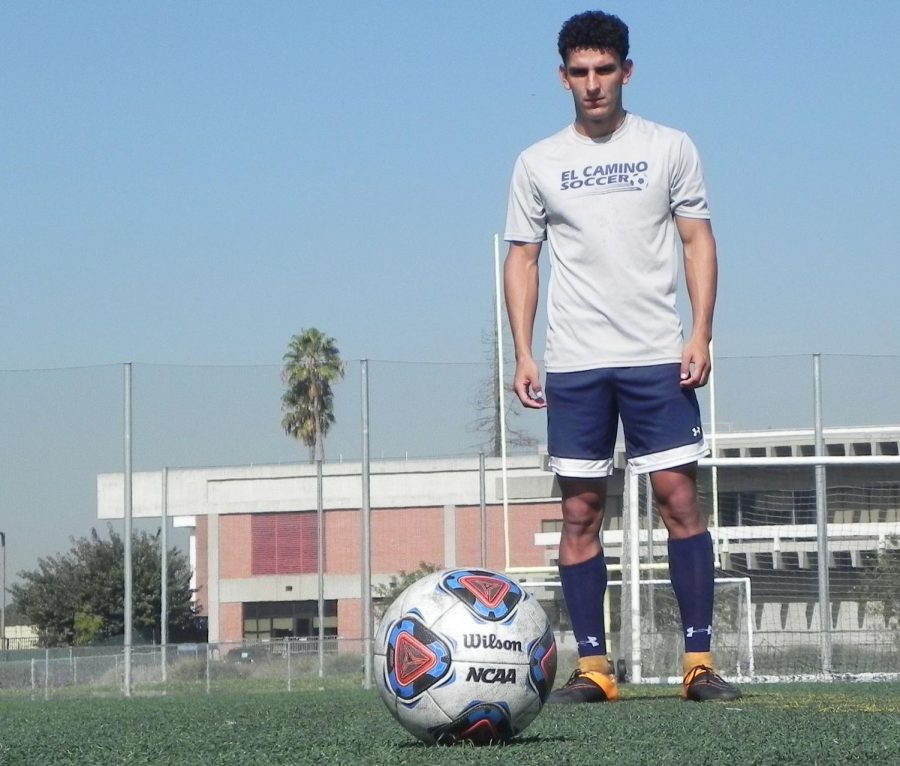 Santana finished a strong season with the Warriors, and is now looking ahead at what is next for the sophomore forward. Photo credit: Samuel Hill

Running through defenses with the ball at his feet, El Camino soccer forward Jason Santana isn’t afraid to take a chance on goal, especially on the soccer pitch.

His love for soccer even began in the area, with a little help from his family.

“I started playing soccer when I was eight years old,” Santana said. “One of my uncles convinced my mom to let me join his team. Even with our family being tight on money, my uncle offered to pay for me to play.”

Despite being tight on money, his family was able to keep Santana involved in soccer throughout high school, where he inherited his proudest soccer moment.

“In high school, our team won league champs, which was huge for me,” Santana said. “Being with the team for four or five months while accomplishing that goal was awesome to be a part of.”

Santana’s success from high school carried over, finishing this season tied for third in his conference for goals (nine), finished third in shots (54) and third in points (22).

“This season Jason brought a sense of determination and motivation to the team,” teammate Daniel Lomeli said. “Since the start of the season, those two principles were established in the team. He motivated the team to keep up the work rate and keep the lead in the games.”

The soccer team finished its season with a record of 6-9-7, but Santana saw the bright side from a seemingly down season.

“We had our rough moments but we were a lot better then last year, that’s for sure,” Santana said with a laugh. “It was just one of those seasons were one simple mistake can mess it up, and that’s what our season was. A great season with a lot of simple mistakes.”

Santana’s play this season garnished attention but his ability to be a teammate, something that can go unseen, was recognized by his peers.

“Jason is an overall great teammate,” teammate Zachary Franco said. “I’ve been playing with him even before (El Camino) and he’s just always trying to make his teammates better and do what he can to help the team.”

With this season behind him and his community college playing eligibility used, Santana is looking to take his talents to a college willing to give him an opportunity.

“Before El Camino, I was playing at Cal State LA but because of the price of tuition I decided to come here,” Santana said. “I believe my soccer skills are enough to get me to the next level and get school paid for.”

Santana has a few offers to play soccer from different universities but has yet to make a decision regarding his future stomping grounds.

“All my life I’ve been competitive and soccer has always been a passion,” Santana said. “As soon as I was on the pitch for the first time, I knew this was the sport for me.”