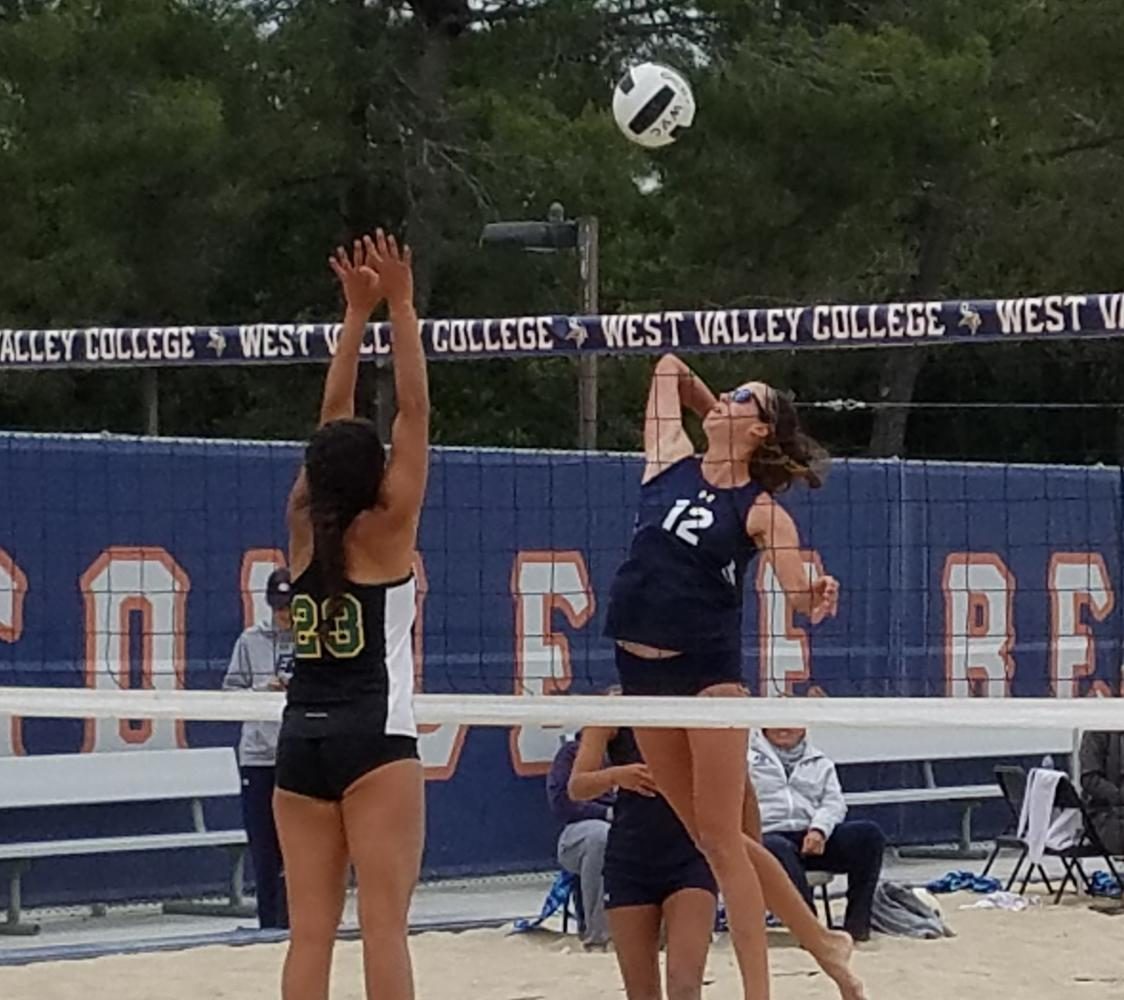 Freshman El Camino beach volleyball player Micah Hammond attacks the ball against Feather River College's Cyan Blackdeer in the Round of 16 in the State Individual Tournament on Saturday, May 6. Hammond and partner sophomore Michelle Shimamoto advanced all the way to the State Finals match on Sunday, May 7 and eventually lost to claim second place. Photo credit: Phil Sidavong

When you go the furthest any other player has ever gone, you don’t have much to lose, and sophomore Michelle Shimamoto really thought that. She and her partner freshman Micah Hammond were on deck to play in the State Individual Tournament Finals for beach volleyball on Sunday, May 7.

But a steep road block was in their path.

Hammond/Shimamoto never beat them during the regular season and Miller/Panter were regarded as the top No. 1 pair in the state.

They showed why they were so tough to beat after cleaning up the Warriors’ pair in a quick two-set victory.

Miller hit big kills when they needed it, and Panter made great defensive plays during long rallies in the pair’s back-to-back 21-18 wins in the State Finals.

The Warriors had to settle for second place, but Shimamoto really couldn’t be more proud of the work she’s done with Hammond.

“We went through this rough patch for last two weeks (before the individual tournament), but we found our (rhythm) when it counted,” Shimamoto said.

Shimamoto who was ranked No. 1 in the seedings in 2016 was knocked out in the Round of 16. Former players Brooke Russell and Nickeisha Williams made it to the semifinals in 2015.

To Shimamoto and Hammond, this is a great thing for them, they said.

But the story that could force all Pacific Coast Athletic Conference teams to step their game is the emergence of Miller/Panter and the Long Beach City College Vikings.

Miller and the team have an incredible coaching staff to thank for being so well coordinated this year, as one of the most recognizable names in beach volleyball history coaches the team.

Misty May-Treanor and her impeccable crew have led a team that was basically a club team and could only field four-full pairs from the 2016 season into a top-ranked and State Championship-contending team in 2017.

“My whole goal in getting the Long Beach City position (Director of Volleyball), was to help bring the program up,” May-Treanor said. “First and foremost I think we have one of the best coaching staffs.”

A well-thought out coaching staff is a necessity that can make or break any team, because community college sports teams are constantly changing year after year. A good foundation is necessary.

“(Long Beach) hadn’t been to the playoffs in the last 16 years for (indoor) and the team made it to the Top 16 last year,” May-Treanor said. “And to have the team come out and finishing how we did, it says a lot about the work the coaches have been putting in.”

Miller and Panter are part of Long Beach’s first inaugural season that saw the Vikings placing second in the state for the team finals on Friday, May 5, with that pair claiming the Individual State Title.

“Ever since the first day of practice, we really clicked,” Miller said. “Every time we touch the court, it’s been amazing. If I make a mistake, she has my back and if she makes a mistake, I’m there for her and that’s all you really need.” 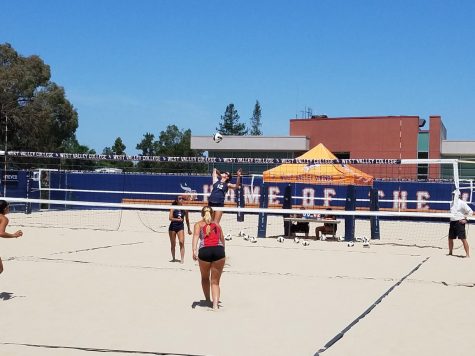