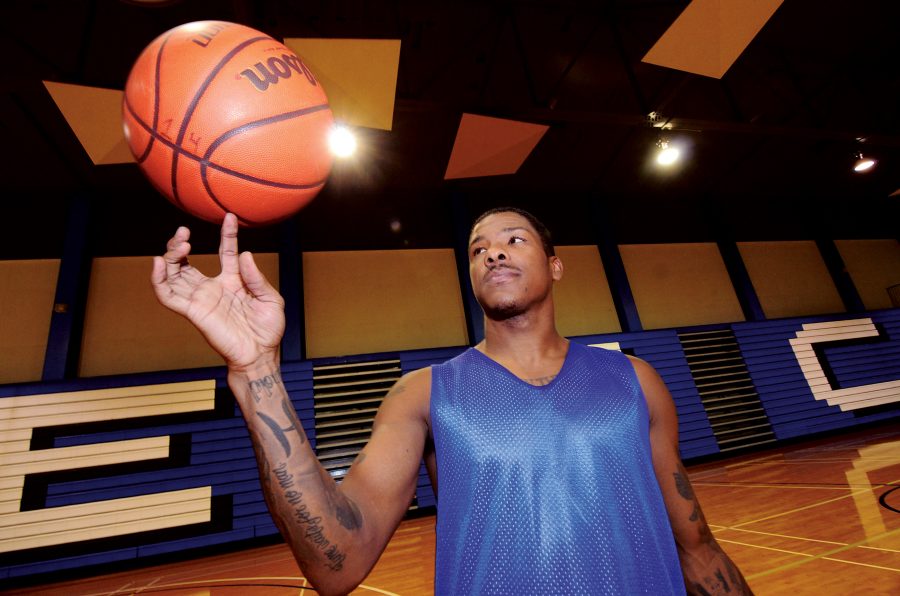 Brandon Harris, 28, kinesiology major, is the freshman point guard for EC's basketball team. Harris said his motivation for being better at the sport is his three children. Going back to school was a choice he made to become a role model for his kids, he said. Growing up, his uncle was the one who taught him how to play basketball since his father wasn't around, he added. Photo credit: Alba E. Mejia

The clock rapidly ticks down to the last few seconds of the game and the teams are tied at 106, which has the crowd in anticipation and cheering on their feet.

The Warriors are battling for the win against the Santa Ana College Dons after losing the night before to the Moorpark College Raiders for the first time this season.

Freshman guard Brandon Harris has been draining three-pointers all night and keeps spirits high with his roaring energy, despite the game going into double overtime.

His small-dark eyes scan the court and two deep lines above his eyebrows crinkle as a glow of sweat glistens from the beaming iridescent lights above.

Harris is a 28-year-old kinesiology major and father of three children. He’s been playing basketball for most of his life. Through seven games, Harris is averaging 12.6 points per game.

As he plays on the court or cheers his teammates on from the bench, Harris’ girlfriend, Precious Douglas, watches the game from the bleachers.

Douglas, 24, business management major at Long Beach City College, has her hands folded while her polished white nails stressfully tap her knuckles under her chin.

“This game is tight,” Douglas says.

Despite being six-feet-tall, Harris’ agile frame looks compact among the sea of giants and his quick footwork and swinging arms cover the court like a stealthy spider.

But just a few months ago, Harris was stuck at the tail end of a 10-year-hiatus from team basketball.

As a father, Harris put his dreams aside to work warehouse jobs to pay the bills until last year when he started school at Chaffey College in Rancho Cucamonga only to get injured before the season started.

Instead of looking for another dead-end job, Harris persisted by getting in touch with EC coach Robert Uphoff, who recruited him to play for the Warriors.

Uphoff said since Harris joined the team, he has been a confident and energetic leader, one of the teams most prolific shooter’s and the most vocal force on the team.

Meanwhile, Harris makes another shot. One of the Dons players threw a bad pass, opening the window for Harris to steal the ball and run down the court to sink another shot.

Again the crowd is on their feet.

Tennis shoes screech and the ball bounces with a thud when the buzzer suddenly cranks. Kris Kross’ “Jump” blares over the speakers and Harris starts dancing, making his presence known with his palpable energy.

“Brandon is an incredible competitor and he wants to win,” Uphoff said. “He’s always communicating (and) his maturity has been valuable, as a result he’s a good leader both on and off the court.”

Douglas said Harris has experienced his fair share of adversity, but he never loses hope or his drive to achieve.

“I told him to go for it, I wanted him to achieve that,” she said. “To follow his dreams and set a standard for the kids.”

Now Harris devotes eight hours a day to basketball in hopes of obtaining a scholarship, getting a degree and someday teaching physical education.

Harris’ parenting extends beyond fathering his children. Team captain Brandon Guerrero, 20, said Harris’ words of wisdom have labeled him the father-figure of the team.

“He preaches to us about everything,” Guerrero said. “(He’s always saying) ‘don’t make the same mistakes I did.’”

Though Harris is a boisterous extravert, being on the court provides for him what nothing else in the world can, peace.

“When I’m out there I feel free,” Harris said. “I don’t forget about my children, but I forget about the responsibilities I have outside of school and for those 40 minutes, I just feel free.”