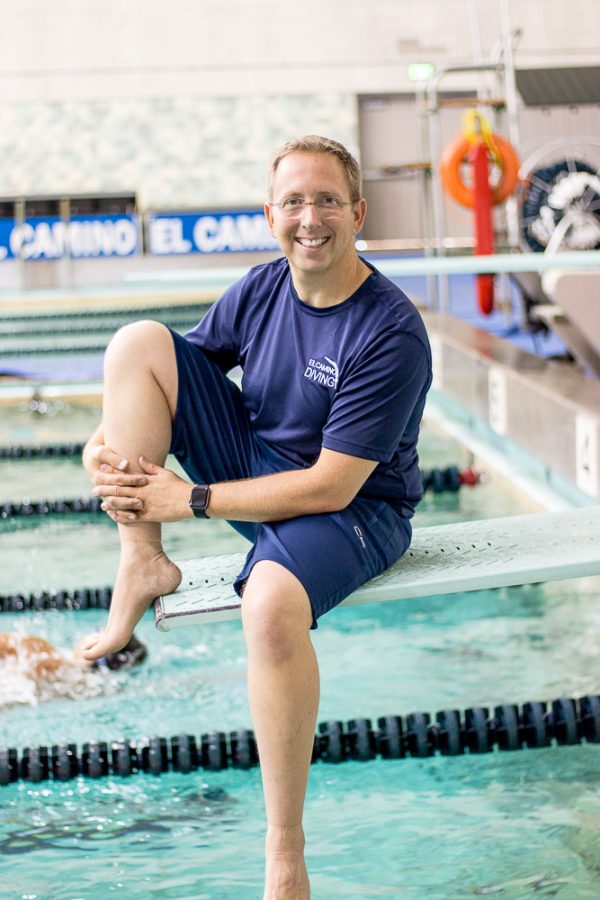 Alex Mackey sits on a springboard of success. Mackey has advanced to the State Championships, held May 5-7. Photo credit: Alisa Banks

As he climbs up about 9-10 steps on the diving board, he turns the dial on the fulcrum to his liking and Alex Mackey takes a leap of faith and dives into his dreams and nightmares.

Mackey’s wife was in labor with their soon to be third child. On his drives to the hospital, he would stop and get fast food or grab some cookies.

“It was so easy to stop by 7-Eleven and get some cookies on the way to the hospital,” Mackey said. “The weight gets put on so gradually you hardly notice until you get to a certain size.”

Stressed about his son, Mackey ate away his pain, and consequently his health suffered. He gained over 50 pounds and weighed in at 220 pounds.

Mackey knew his health was at risk when he took a self-serve blood pressure test at a local pharmacy and the numbers were too high.

While Mackey started working on his weight, he lost the 50 pounds he gained and more. Now that his weight was down, he could tackle other obstacles.

As Mackey watched his kids in swim class on a summer afternoon at EC, he chatted with the kids’ swim coach, Corey Stanbury. Mackey mentioned his love for diving to Stanbury and how he’d taken a class at his alma mater Brigham Young University.

“You should take my diving class,” Stanbury replied with excitement,

So Mackey did. He enrolled in the beginning swimming course at EC, where he thrived in the class and became a standout amongst his classmates.

Stanbury, in his 28th year this season as the EC swim coach, encouraged Mackey to try out for the 2013 swim team.

Mackey made the team however during a practice, Mackey injured both of his rotator cuffs while diving and was sidelined for close to a year.

After his surgery and recovery, Mackey emailed the American Olympic Diver, Greg Louganis to inquire about training. Louganis, who won two gold medals in 1984 and 1988, wanted to see video footage of Mackey. After seeing the footage, Louganis agreed to train and mentor Mackey.

“I get request all the time from people who want to be trained; they’re usually out of the country, but Mackey was close and I was also compelled by his story,” Louganis said. “His positive attitude and love for the sport made me want to do it.”

Mackey participated in his first dive meet on Feb. 20, where he won both the 3-meter board and 1-meter board competitions.

Mackey’s ultimate goal is to make it to the state championship.

“Different people have different strengths, his is eagerness to learn, it’s not easy putting your body through that in your 40s,” Stanbury said.

Mackey wrote a book about his journey to be a diver called, “Big Fat Diver.”

“I wrote the book because I want a good legacy to leave behind for my kids and also my wife, who was amazing throughout the process of letting me go through with this,” Mackey said.

If you would like to know more about his story go to BigFatDiver.com