Injuries not a challenge for passionate basketball player 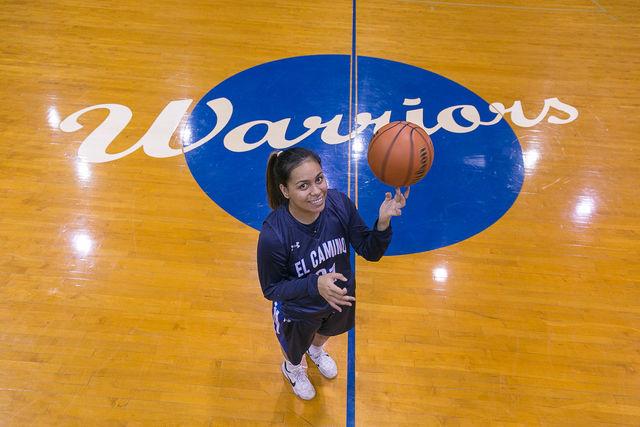 Freshman forward Meghan Peneueta poses with the ball on her finger in the middle of the North Gym. Peneueta was named 2015-16 South Coast Conference-South Co-Player of the Year. Photo credit: Elena Perez

Injury after injury at a young age didn’t stop her.

Not simple injuries, but anterior cruciate ligament (ACL) surgeries; and not one, but two in high school.

Then again, with her passion for basketball, there was no way she wasn’t going to make a comeback.

After overcoming two ACL surgeries in high school, freshman forward Meghan Peneueta is proving she can lead on the community college level.

“I have always had a passion for basketball, the energy and how good I feel is different when I’m on that court,” Peneueta said.

Peneueta was named 2015-16 South Coast Conference-South Co-Player of the year after finishing the season averaging 17 points per game along with eights rebounds, 2.7 steals and 2.5 assist.

She was also named Second-team All-State and is the first player under head coach Steve Shaw to be given the honor.

“It’s an honor to be recognized for something that I love,” Peneueta said. “But I couldn’t have done it without my coach and team.”

It took time, practice and patience after the knee injuries that set her back in her prep career at Redondo Union High School.

She tore the ACL in her right knee as a sophomore, and later on the other ACL tear in her left knee kept the budding star sidelined for the whole season during her senior year.

As a kinesiology major, her injury opened her eyes to what could be another career for her.

“My injuries made it clear that I wanted to study and work with sports injuries to help people like me and prevent these type(s) of injuries from happening,” Peneueta said.

She got a fresh start coming to EC; no injuries, new opportunities and a new coach in Shaw who is in his 16th season as the head coach of the women’s basketball team.

“She’s a real aggressive player, she makes things a lot easier for her teammates and I’m having fun coaching her,” Shaw said.

Her inspirations are what kept her going after the injury to get better. Her favorite player is none other than Lakers superstar Kobe Bryant, but another inspiration was someone closer.

Rheina Ale, Peneueta’s cousin, is somebody she grew up admiring. Ale was a star in the south bay before attending the University of San Francisco.

“Meghan has always had heart, and you can’t teach that,” Ale said. “(In) my career I’ve seen tons of women suffer knee injuries and give up playing. She played with me and my brothers growing up and never backed down from a challenge even if it was a boy.”

While Peneueta enjoys the recognition, next season will be full of high expectations.

“My goal for next season is to get better as a player and as a leader,” Peneueta said.