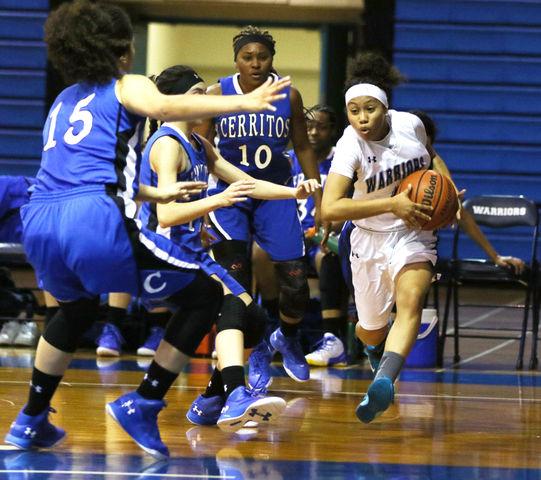 Sophomore guard Kyla Jolly (4) charges in towards the guarded basket. The Warriors defeated the Cerrito College Falcons, 60-50, in the last game of the season on Wednesday, Feb. 17. Photo credit: Jo Rankin

“Beat the birds” broke out in chant as El Camino’s offense flew past the opponent to the basket.

Freshman Meghan Peneueta had another standout game for the Warriors and scored 26 points with nine rebounds and finished a perfect 13-for-13 from the free-throw line.

“(Meghan) has been fabulous, she has exceeded my expectations,” Warriors head coach Steve Shaw said. “She has so much offensive skill and she works hard on the defensive end. A lot of credit needs to be given to her, for what she has done for us this season.”

The Warriors executed great on defense throughout this game and dominated on the boards and they were held to a four-point second quarter but only trailed by one point at halftime.

El Camino’s high-tempo offense controlled much of the second half and led them to a 27-point fourth quarter to seal the victory on Sophomore night.

“We beat a good team and our (team) played great basketball,” Shaw said. “Even though we struggled at times, we kept making plays and reacting on defense.”

“It feels really good that we did this on (sophomore night) and we played really well as a team,” sophomore guard Kyla Jolly said. “I’m just glad that we got this win.”

Jolly had 16 points with two rebounds. Freshman forward Kourtney Noa struggled from the field only scoring four points on 1-for-10 shooting, but was strong on the boards collecting 16 rebounds.

“We feel really good getting this win,” sophomore Michelle Sroczynski said. “(The team) played a good game and finally worked well with each other.”

The Warriors finish the season with a 14-13 record and 5-3 in the South Coast conference.