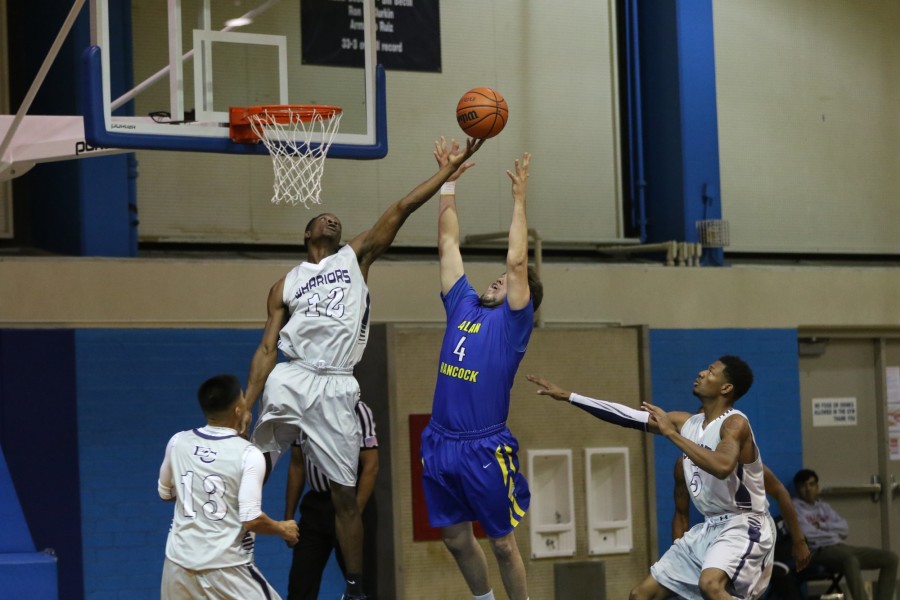 Aggressive defense led to a steal by Warriors freshman guard Jason Ball who finished the fast break himself with an emphatic two-handed dunk and hung on the rim for the finishing touch.

Unfortunately, due to 11 turnovers and sloppy play in the second half, the Warriors fell behind by as much as 26 points and Allan Hancock College was able to steal the game with a 75-52 victory.

It was a close game at the start, with both teams applying extreme pressure on defense causing a back-and-forth contest.

The Warriors could not get any shots to connect early in the game and finished the first half making 33.3 percent from the field on 11-for-33 shooting. The Bulldogs finished the half with 47.8 percent on 11-for-23 shooting.

EC could not find its shot from behind the three-point line either, sinking in just one 3-pointer out of its nine attempts. Allan Hancock College made 3-8 from beyond the arc.

But 18 points off of 13 turnovers by the Bulldogs assisted the Warriors in shrinking Allan Hancock College’s lead to trail 31-34 at halftime.

Freshman forward Lacy Johnson finished the game with a team high 10 points all coming in the first half, also adding two rebounds and one block.

“This was probably my best performance,” Johnson said. “But I hold myself to a high standard, so I’d say I did ok but I can do much better.”

Allan Hancock College came out of halftime on fire scoring 41 points on 14-for-24 shooting. El Camino scored 21 points in the second half making just six field goals out of 20 shot attempts.

Bulldogs head coach Tyson Aye said the main focus coming into this game was to defend without fouling and to keep the Warriors from grabbing offensive rebounds.

“El Camino is really good on the offensive rebounds, so we had to focus on keeping them off the boards,” Aye said. “We knew we had to play tougher and slow it down and just take care of the basketball.”

Warriors freshman forward Jakoby Lee said his teammates expect a lot from each other and they know they underperformed.

“I feel like we could have done better, and we will do better,” Lee said. “We need to execute better because I think we kind of overlooked these guys and we didn’t think they were as good as they were. We just have to come back more focused and intense for the next game.”

The Warriors (1-6) will seek to earn their second win when they travel to Southwestern College (4-2) on Dec. 8.