Season comes to an end for women’s soccer 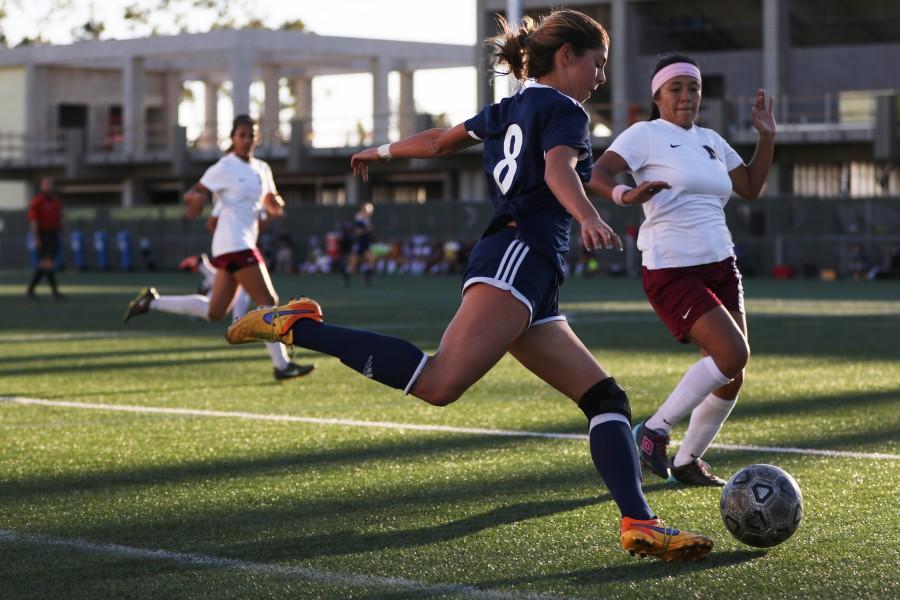 After a disappointing season offensively, the women’s soccer team (6-11-4) concluded its final game on Friday at home with a 1-0 loss to Mt. San Antonio College (9-10-1).

When the final whistle blew, many players shed tears. It was the last time they would suit up to play college ball. The EC squad played for pride, while the away team still has playoff hopes.

For 90 minutes, Mt. SAC’s sidelined players cheered and yelled positive comments to their teammates on the field. EC on the other hand was silent.

“Sport is about developing people to learn leadership,” Mt. SAC coach Melinda Bowen said. “I love working with my girls and helping them get better as a team. Attitude is certainly everything.”

At the end of the game, EC’s freshman forward Ruby Navarro said to a teammate, “I quit.”

All season the Warriors lacked playing together as a team, and it wasn’t until the final games that they developed chemistry and played for one another.

The last time these two teams played against each other was Oct. 20 at Mt. San Antonio, where EC took the loss with a final score of 4-1.

“It was a much improved performance from the first game,” coach John Britton said. “We had chances to score but failed to take them which is the story of our season in a nutshell.”

Mt. SAC’s coach felt this was a tougher match than their last encounter.

“EC definitely played better this game,” Bowen said.”Their condition and ball movement improved. I’m sure that they will be a better team next season.”

This season EC has shared many up and down situations, according to Najera.

The injury to defender Mercado hurt everyone. Players had to rotate to fill in for her spot and it caused frustration between them.

“This group of girls has been through a lot together,” Najera said. “We just love each other too much to let a negative situation ruin it. Frustration got to us, but it did not destroy it, it made us better. I am proud to say that I was part of all of that.”

EC will be recruiting players this off-season to add to its roster for next season.

Freshmen midfielders Miranda Ramirez and Sarina Ferlazzo, best friends off the field, are players that can provide leadership to incoming freshmen.

“It will be a huge difference losing our captains,” Ramirez said. “Next season, we hope to not let the same mistakes happen again.”