We need to speak up and support the Black community 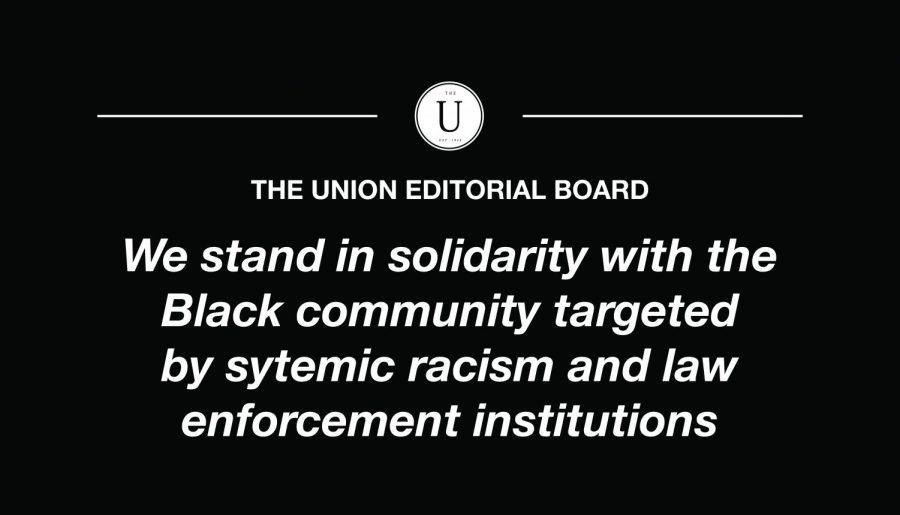 As local cities surrounding El Camino College have had protests following the murder of George Floyd, multiple programs and organizations at ECC have issued statements standing in solidarity with the Black Lives Matter movement and the Black community in the face of institutional and systemic racism perpetuated onto this community.

According to the California Community Colleges Chancellor’s Office Data Mart, Black folks make up 14.01% of ECC students and 6.87% of tenured faculty in the fall semester of 2019. Those impacted most by systemic racism are members of the ECC community and we need to voice support for them.

People can no longer turn a blind eye to the racism, violence and police brutality that Black folks face daily. News and media coverage on the masses of demonstrators demanding justice for George Floyd, who was murdered on May 25, 2020 by Officer Derek Chauvin of the Minneapolis Police Department, is constantly circulating.

As a part of the ECC community, The Union’s editorial board recognizes and stands in solidarity with Black Lives Matter as well as our peers and loved ones who are a part of the Black community. We demand justice for the lives of George Floyd, Breonna Taylor, Ahmaud Arbery, Tony McDade and every other Black life that has been taken due to racism and hate.

We acknowledge and support the intersectionality of Black identities and stand with Black trans, nonbinary and LGBTQ+ folks amidst the violent racism, transphobia and homophobia that is brought upon them.

We recognize and refute the patterns of systemic racism within law enforcement and governmental institutions at large, and even ones local to us as a college. On Dec. 9, 2018, Torrance Police Department shot and killed Christopher Deandre Mitchell, a Black man who officers suspected as a car thief. Even in the same city that our college resides in, racism and police violence inflicted on Black people is ever-present.

With a large community of Black folks in cities neighboring ECC, it is imperative that we, as an editorial board, use our privilege and platform at The Union newspaper to shine light on the existence of the ongoing and current reality of Black Lives Matter and the Black community as a whole.

ECC’s Associated Students Organization have posted a statement condemning injustices Black folks have experienced for centuries, and stated it stands with the Black Lives Matter movement and their effort to combat violence and racism towards the Black community.

ECC’s EOPS/CARE/CalWORKS/Guardian Scholars programs have also released a statement standing in solidarity with the Black community, additionally noting that EOPS was birthed out of the Civil Rights Movement in the 1960s.

Furthermore, ECC’s Academic Senate published its unanimous adoption of a resolution on Tuesday, June 2 affirming the rights of black students and faculty, encouraging professors to incorporate topics that “historically and contemporarily” address forms of racism into their curricula, supporting students’ nonviolent demonstrations on campus and at school events relating to racism, and ultimately expressing their solidarity with the Black community and opposition of the systemic racism they have endured.

It costs nothing to show solidarity and give support to a community that has faced centuries of abuse and racism. There’s no reason to stay silent on this.