A place of belonging 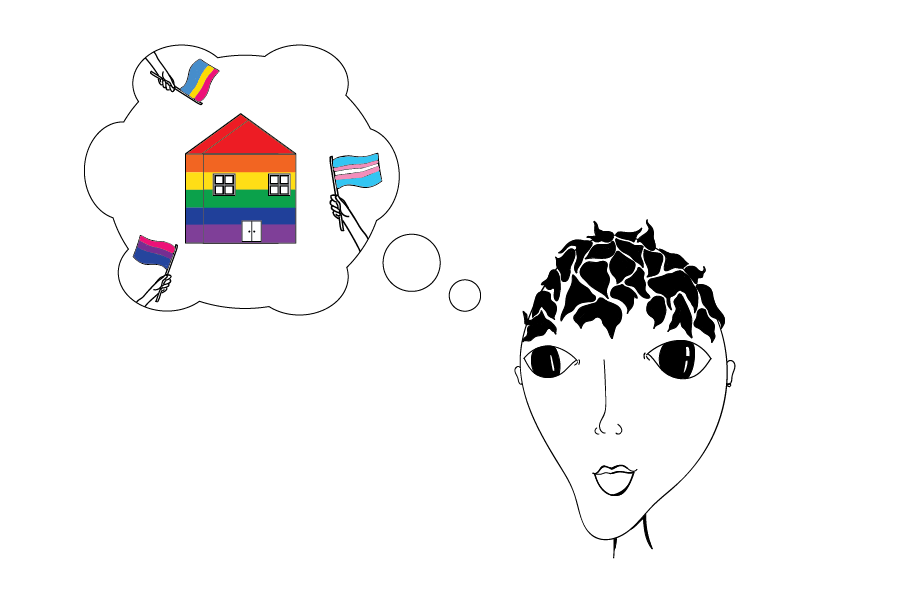 Thea Rosemary/Special to The Union

I still vividly remember the profound memory of being in dance class during my freshman year of high school.

I realized I was pansexual quite some time before then, but now, something felt out of place.

Imagine waking up everyday in a body that does not make you feel adequate. I was so uncomfortable, I wanted to crawl out of myself.

I had not yet discovered the term body dysmorphia, so experiencing feelings of inadequacy, discomfort and anxiety for existing was flooding me with dread. I didn’t feel like a girl.

When I was a child, long before I realized I was nonbinary, I really cannot remember being conscious with identifying as a girl. I was just a kid, a person.

So, at that present moment, navigating through physical and mental development as a 14-year-old who was also discovering things about themself that they had no idea about, I felt so much inner turmoil within me.

I remained feeling absolutely out of touch with my body and sense of identity. The immense confusion and fear of being the only person to experience the emotions I had made me feel ostracized from everyone around me at school.

Then, when I felt like there was no light at the end of the tunnel, I made a new friend. That friend introduced themself to me as identifying as gender-fluid.

Hearing that captivated me and a whirlwind of hope swooped me up.

After learning about other genders through this illuminating conversation, I was enlightened and comforted in a way I had never felt before. Meeting someone who was not cisgender felt like a dream come true.

According to Human Rights Campaign, 41.8% of nonbinary youth confirm having attempted suicide at least once in their life.

I am so fortunate to have met a friend that helped me realize who I was all along, because now I know I was never alone, no matter how much I thought I was.

During high school, there were LGBTQ clubs on campus that gave queer folks and allies support, but seldom was there anything from my high school institution itself.

Members of the LGBTQ community at my high school, especially the queer and transgender people of color, relied on one another to provide a sense of love, community and establish a space for each other.

It was a beautiful thing to witness, but I still felt as though my high school institution could have made us feel more welcome, like they were proud of us as we were.

If there had been additional resources available at the high school I attended, like a permanently established space for my community, my experience would have been entirely different.

If there was a place for me to go when I had questions and confusions about what I was feeling, I would have sought refuge there in a heartbeat.

And I cannot emphasize what a privilege it is to attend a community college that actively supports my community.

El Camino College provides a plethora of LGBTQ resources on their website, including a map of the gender-neutral bathrooms on campus, upcoming events, health resources and even scholarship opportunities to name a few.

ECC funds the LGBTQIA+ Safe Space Training for faculty, staff, and administration to be informed and supportive of all queer students, through Student Equity and Achievement Council (SEAC).

If every incoming ECC student, regardless of age, questioned themselves and their sexuality or gender, I would want to do everything I could to prevent them from what I experienced in high school, but still, I am one of the lucky ones.

If there was an entire center/space on our ECC campus dedicated to my community, where LGBTQ students could go to seek community, or answers to the questions that make them feel so out of touch with themselves, it would be monumental.