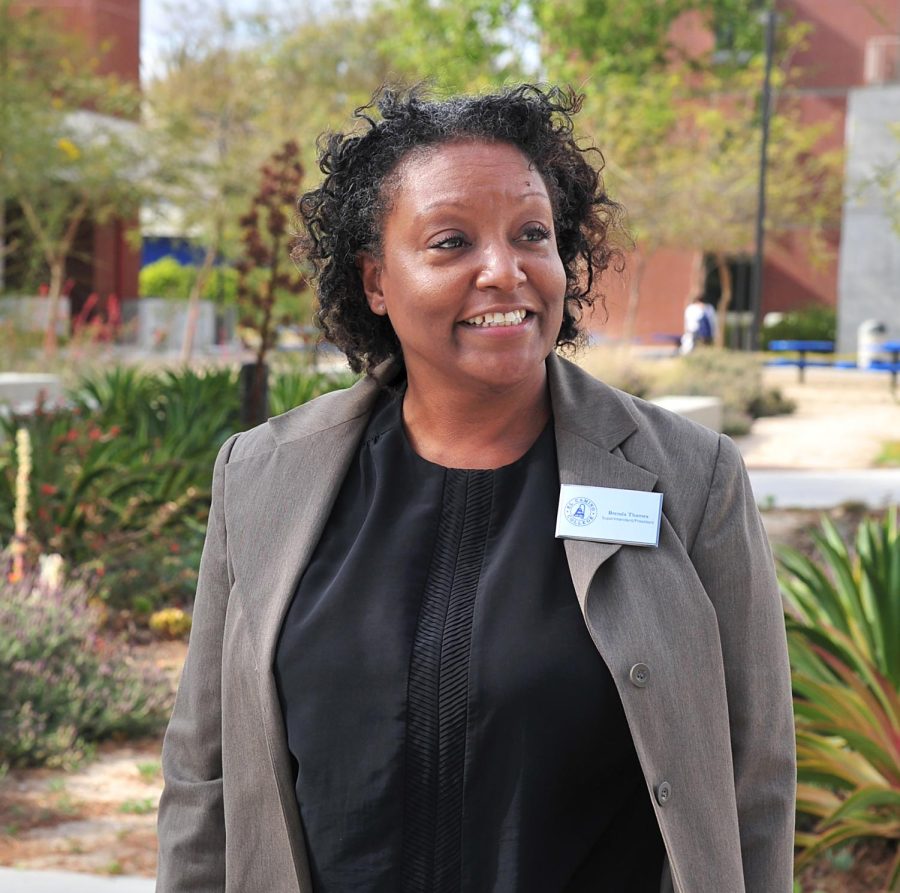 El Camino College President Brenda Thames smiles while in conversation with an El Camino student on April 21. The president will have served one year as president in July. (Gary Kohatsu | The Union)

Note: The majority of the research data featured in the following story is accurate as of Dec. 2021.

Much like the state itself, California’s community colleges represent a diverse group of students, staff and faculty members; representing people of many different ages, genders, races and ethnicities.

Diversity among the different administration and superintendent positions at several California community colleges has seen a steady increase over the past five years, however, the current data shows that it’s still far away from the representation that is reflected among the student population

In addition to the changes in diversity and inclusive efforts from California’s community colleges, the salaries for executive officers such as the presidents of these community colleges have also seen some notable changes due to economic inflation.

Several reporters from The Union student-run publication have gathered data on the diversity and presidential salaries of several well-known California community colleges, which include their home institution at El Camino College, in addition to Santa Monica College, Los Angeles Pierce College and Fullerton College.

For current El Camino President and Superintendent Brenda Thames, there is a contract providing documentation of her salary from El Camino, which has been obtained by The Union. Maloney’s salary documentation from El Camino College is listed on Transparent California. There is a difference recorded between the starting salaries of the two women.

Thames’ contract said on page two, “Effective July 1, 2021, the annual base salary of the Superintendent/President shall be Three Hundred and Seven Thousand Dollars ($307,000) for each complete fiscal year of service during the term of this Agreement, payable in equal monthly installments, with a proration of the salary for a period of less than 12 months of service in the fiscal year.”

Maloney started as president at El Camino College in 2016 and received $251,153.00, according to Transparent California, making it a 22.24% difference between the two starting salaries.

Thames said that with different schools, “CEO colleagues, one colleague, asked for a particular language in his or her contract as opposed to a dollar figure. Because where they’re at in their personal life, that language was what was of value to them.”

Board of Trustees Vice President Trisha Murakawa told the Union that during the drafting of Thames’ contract, part of the hiring process was, “We have an Attorney who works for the Board of Trustees and our attorney drafted the contract.”

In Thames’ contract, she has an Automobile Allowance, “…of One Thousand Forty-Two Dollars ($1,042) payable on the first day of each month succeeding any month in which services are rendered under this Agreement.”

Thames’ contract also provides for moving expenses. Page 10 of the contract states, “Total reimbursement for relocation expenses as specified shall be in an amount not to exceed Ten Thousand Dollars ($10,000), payable upon receipt of invoice(s).”

The presidential salaries at Santa Monica, as well as amendments to Jeffery’s contract, are approved by the Santa Monica Community College District acting through its Board of Trustees. 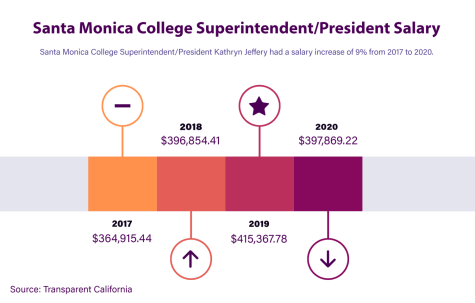 Santa Monica wanted to be competitive with other districts and allow space for increases since the district wanted the stability and momentum of having a long-term leader.

According to Jeffery’s contract, the Santa Monica College District pays the superintendent/president the total sum of $2,000 per month for housing in an area within or adjacent to the district which was amended in 2018.

In 2020, Jeffery also took a temporary pay cut when Santa Monica furloughed administrators two days per month to get through the early and severe revenue losses of the pandemic.

Fullerton is one of two colleges that belong to the North Orange County Community College District, which has a tiered salary that increases each academic year that a superintendent is in office, maxing out at eight years of service.

According to the North Orange County Community District’s Executive Officer Salary Schedule for 2021-2022, Fullerton’s previous president, Greg Schulz, made $253,738 before leaving to accept his position at Citrus College.

Data regarding Schulz’ current salary has not been updated but according to Citrus College’s average presidential salary in addition to Citrus College’s Management Salary Schedule, Schulz is likely earning a similar salary wage, with the chance of receiving over $10,000 each year that he is president. 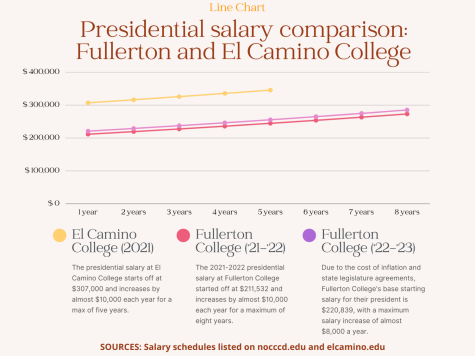 A new Executive Officer Salary Schedule will be going into effect on July 1, which will see Contreras earning $228,975 for his second year in office; an almost $10,000 increase over what he would have made for the 2021 – 2022 salary schedule.

Los Angeles Pierce College in Woodland Hills has experienced changes in presidential salaries as well but has a different method for the total salary.

According to the Nov. 4, 2020, Los Angeles Community College District board of trustees agenda, vice chancellors’ and presidents’ salaries are determined by a five-step monthly salary schedule.

“What I noticed is that sometimes if they come from out of state and they used to make more money, it has to do with them making more money at their previous job,” Aguiar said. “They actually get a higher ranking.”

Montevirgin, who had been employed by the district for two years, was not due for a salary increase until July 1, the day after his final day of employment with LACCD.

Pierce College Presidential salaries, as listed on Transparent California’s website, were as follows: 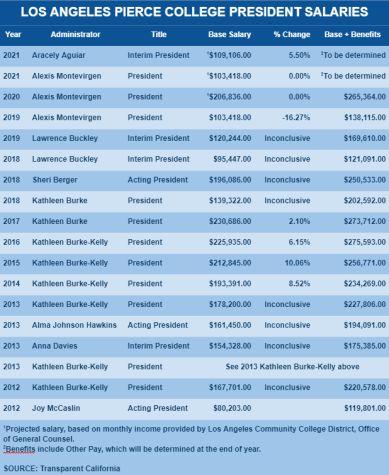 The process of finding Maloney’s successor involved different processes and ideas that the Board of Trustees members each had as individuals for what they wanted to see in their next president.

“One of the things that I personally was looking for was making sure that we had a diverse… population of candidates… and I think we did,” El Camino Board of Trustees member Kenneth Brown said.

Brown also said there were many aspects where he was personally looking for diversity in a candidate.

“Not just diversity in racial or gender makeup… It was having a diverse population of experiences. Of maybe… their history in California and how they ascended into that, into whatever their current role was,” Brown said.

“We still see a lack of diversity in both our faculty and administrative ranks and we’re taking the position that that’s not acceptable and we need to continue to change…,” Oakley said. 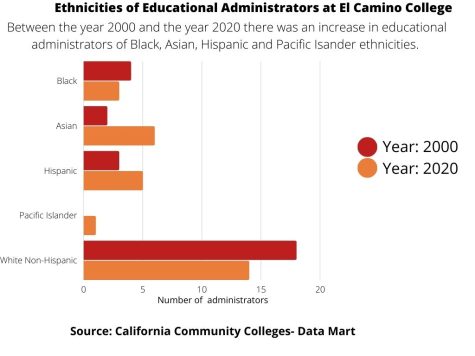 El Camino College data indicates an increase in diversity in terms of ethnicity between two-year colleges over 20 years.

In 2000, there were 27 people in the position of Educational Administrator, according to the California Community College Datamart.

The information from the Datamart on ethnicity showed that the percentage of African American, Asian, and Hispanic people made up about a third of this group, 33.33%.

A noticeable change is the inclusion of an Unknown ethnicity category and the absence of American Indian/Alaskan Native, Multi-Ethnicity and Pacific Islander administrators. 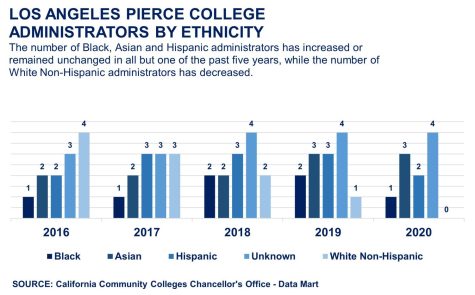 For Santa Monica College, the college had a total of 48 educational administrators in the fall 2020 semester who are ethnically and racially diverse.

According to California Community College Chancellor’s Office Datamart (CCCCO), 41.7% of these administrators are White Non-Hispanic, 29.2% are African-American, 16.7% are Hispanic, 4.2% are Asian, 2.1% are Pacific Islander and 6.2% are of unknown ethnicity.

Jaffe said that race, ethnicity, gender or age are not in any way germane to salary nor hiring considerations at SMC.

As of fall 2021, Fullerton College has a total of 21 administrative staff members with nine of them being Hispanic and eight of the total 21 being women. This is only a marginal increase from 2016 which saw eight people of color in office. The amount of women representation has shown consistent data, with 2017 being the year that saw nine women in administrative staff positions. 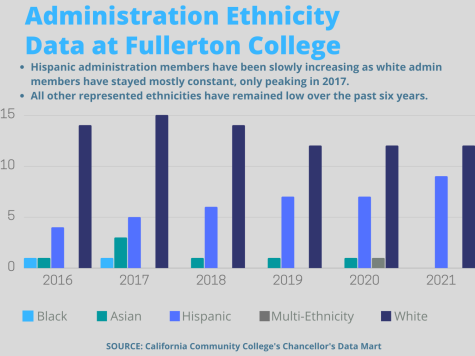 While administrative offices across colleges like Santa Monica and Fullerton remain male-centric and White-dominated, many different colleges are beginning to represent California’s vast population of Hispanic people.

Opposite Fullerton, El Camino College data has shown that there has been an increase in women holding administrative positions. In the early 2000s, administrative positions had a higher level of men, but according to the California Community College Datamart, from 2007, women have held more than 50% of positions in the Educational Administrators area of El Camino College. People in Non-Binary categories started getting documentation in 2019. 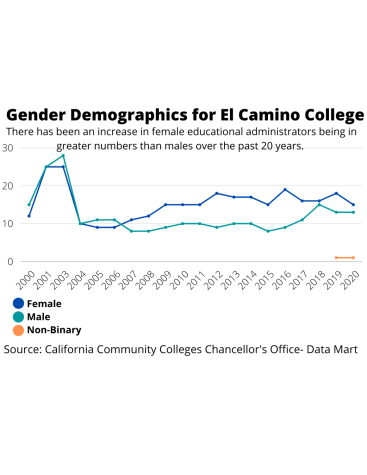 Public data recently reviewed for Los Angeles Pierce College in Woodland Hills has also shown attempts are being made to diversify its administrators, with women and people of color being chosen to lead the college.

Aguiar took over her position on July 1, after former President Montevirgen resigned in June due to health and personal reasons, according to Pierce College’s The Roundup News.

Aguiar, who previously was vice president of academic affairs at West Los Angeles College, is the sixth female, and eighth overall president, interim president or acting president at Pierce College in 10 years.

There has been a shift in women holding higher positions of power, such as college administration offices. 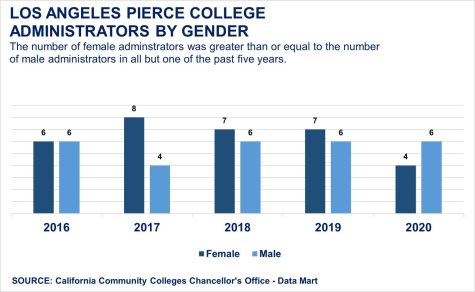 El Camino, Santa Monica, Los Angeles Pierce and Fullerton College have all made great strides in diversifying their respective administrative offices as they now more accurately convey the representation and diversity that’s present in each of their institutions.

Not only is also important to find leaders of different backgrounds, beliefs, ethnicities and genders, but it’s also equally important that each college stays competitive with the wages that they pay their presidents by constantly adjusting salaries with inflation and by providing enticing bonuses.

Both presidents from El Camino and Fullerton College are in agreeance that the work to diversify their administration and campuses is never done.

“I think there’s still a lot of work to be done. There needs to be a greater emphasis on diversifying all levels of our system, including executive leaders and faculty and classified professionals,” Contreras said.