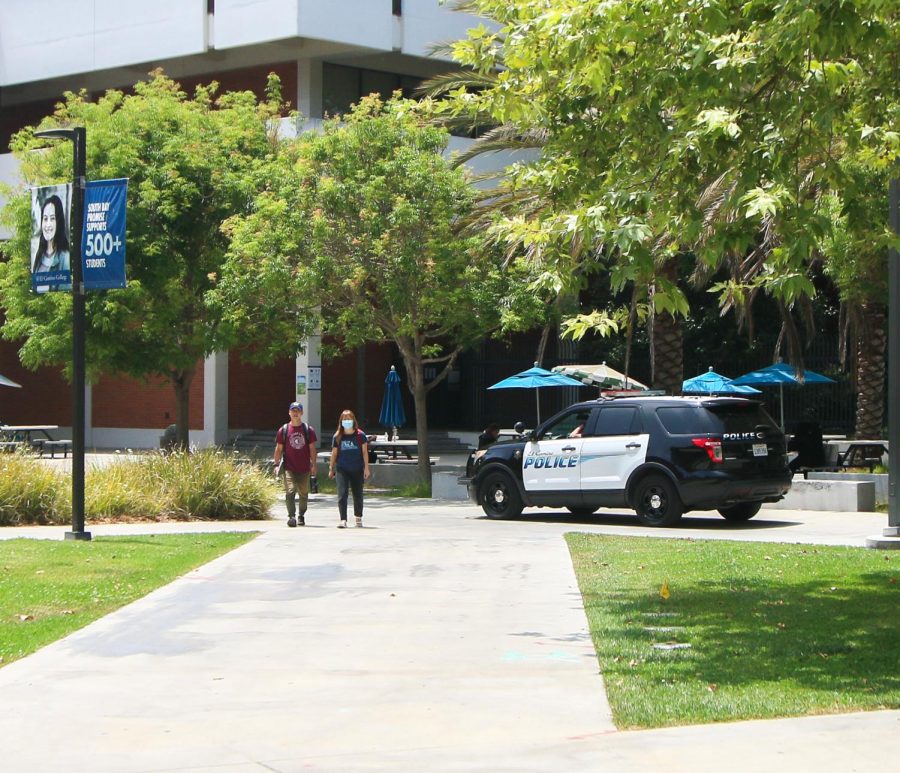 An El Camino College police car passes by as students walk across Library Lawn on Wednesday, May 25. This photo was taken one day after an 18-year-old gunman killed 19 children and two teachers at Robb Elementary School in Uvalde Texas. (Ethan Cohen | The Union)

After the string of mass shootings that have occurred in the month of May, students at El Camino College proceeded as normal just like any other day on campus.

Students like Oscar Escobar, a 20-year-old nursing major, sat under the shade near El Camino’s Library Lawn feeling shocked at the news of yet another shooting in the United States.

“I know that shootings are not that shocking anymore because it’s kind of become weirdly condensed in society,” Escobar said.

Dismayed by the news, Escobar said that the interaction highlights a growing normality that is the mass shooting playing out in communities, places of worship and schools throughout the country in the past two decades.

The shooting, perpetrated by an 18-year-old gunman, started with a dispute with his 66-year-old grandmother and ended with 19 children and two teachers being killed during the hour-long active shooter incident.

In 2022, the total number of mass shootings, defined by the Gun Violence Archive as the “numeric value of 4 or more shot or killed, not including the shooter,” is upwards of 231 incidents since January.

Escobar told The Union that he is concerned about the trend of mental health issues and school shootings that have been plaguing the country over the past many years.

“Since I’m in the nursing field, I can’t imagine how the nurses felt when they received those kids at the hospital,” Escobar said.

Other students, like Elijah Capetillo, reflected on the news of the mass shooting explaining the weirdness he felt to see another shooting happen in the country.

“When I heard about [the shooting], I was like, ‘damn it happened again,’” Capetillo said. “In high school, everyone has a social awareness but in elementary school, they don’t know the darkness in the world.”

The 19-year-old psychology major said that there should be stricter laws on the ability to purchase a firearm and more security in schools with guards that are armed.

According to researchers at the Naval Postgraduate School, there have been a total of 505 cases of gun violence since 2020 at K-12 schools in the United States. Of the 505 shootings, 12 were active shooter situations and 493 non-active shootings.

Director of Athletics at El Camino, Jeffrey Miera spoke about how heartbreaking shootings are when they occur at schools, supermarkets and places of worship, alluding to the Buffalo supermarket shooting in New York and the California church shooting.

“Unfortunately, we continue to hear way too many stories like this,” Miera said. “My fiancé is a first grade teacher, so it really hit home a little bit this time.”

Miera said that there is no question that something has to be done to stop the string of mass shootings that are occurring in the country.

“I don’t have the fix all. I wish I did,” Miera said. “But something has got to change.”